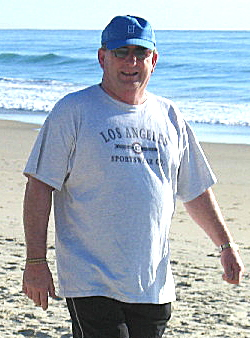 This past November, my bride and I were off for our first vacation in two years, and something was wrong. There was a sadness, the proverbial dark cloud hanging over what should have been a happy departure to sea. We couldn’t identify it. Sometimes Brandi or I have this kind of mood individually, but this time, we felt it together.

In the middle of the second night of our trip, my phone rang. It was my mate Jason, from Toowoomba, letting me know that our longtime colleague and dearly beloved brother, Paul Hardy had died of a heart attack at the age of 56.

Mr Hardy (though he deferred that to his dad, Ron).

The Thunder From Down Under.

I didn’t answer the phone – shipboard mobile charges are steep – and in hindsight I regret that. I knew that Jas knew the time zone difference, and wouldn’t be calling to casually chat at two in the morning. At daybreak, I checked text messaging and the news was there from Roy, wanting to know if I knew more. I didn’t. I checked around a bit, then posted a note to my producers and talent network as to our loss.

One by one, comments came back, thoughts exchanged, sympathies and condolences wished, anecdotes shared. Our concerns for his bride, daughter, sons, and the folks who ran Hardy Audio were forefront. Our sadness was freely spoken of for our friend. Almost without exception, every member shared a story of a long phone call, treats being sent from Oz, the unfailing professional attitude of Hardy Audio, and a let’s-do-it mentality. It was the perfect mélange of professional and personal.

Paul Hardy was a guy who got around – in voice and in person. In person, it was in a pitch-black supercharged Saleen Mustang. He was forever calling from somewhere new – Dubai, some Polynesian island resort, even a movie set being shot nearby. We got photos from Bali, photos from first-class seats on a 747, photos from who-knows-where Australia, photos of his family and co-workers, and of course, photos of his Mustang.

And, if you got him going about his homeland – which was easy to do – he would fill you with the virtues of Being Australian and why near everything was Better Down Under. Why his agency wasn’t hired by the Aussie Tourist Board to be official ambassadors is beyond me.

Paul Hardy, the geo-sociology teacher got us Yanks up to speed on Things We Can Thank The Aussies For, like Vegemite (which I did develop a taste for), “ute’s”, driving on the wrong side of the road (North Americans, not the Aussies), how Fosters is actually lousy beer, and how QANTAS Airlines doesn’t have a “U” in the name (because it is an acronym). Mad Max’s interceptor was a Ford XB Falcon GT, and movies are shot Down Under because it’s a Whole Lot Cheaper and the production crews are a Whole Lot Better. Speedo swim wear. The lack of the use of the word “crikey” among Genuine Australians. Flight recorders, cochlear implants, the Fairlight synthesizer, x-ray crystallography, and the Parkes Radio Telescope (a very important place on 21 July 1969).

Along with tee shirts from the University of Florida and Florida State, I sent him a menu from Outback Steakhouse, the Aussie “themed” and overpriced restaurant here in the States. He told me that they got a good laugh over just how much of a badly stereotyped facade it was.

I made first acquaintance with Paul on Monday February 26, 2001. An e-mail came to me from a humble sounding bloke, saying he had been referred by another talent to look in to this voice-barter thing I was running.

He became one of my best friends and colleagues; Hardy Audio was our business partner for SoundWorks, and we, theirs. E-mails exchanged, audio and scripts flew about, phone calls went on for hours. Business-owner to business-owner discussions. We were both fathers, husbands, tech-heads, car guys, employers, taxpayers, and any other combination you can think of. Along the way, we both grew older – we just never grew up.

Paul is one of the few people that I have found to be worthy to take counsel from, to learn from his experience. He was kind enough to be a keynote speaker in a teleconference for our network early in 2008, sharing what he learned over the years about being an independent producer. Most of our newer network members hadn’t made his acquaintance before then, but they certainly knew his experience was valuable, and took it to heart. Those of us long acquainted enjoyed the refresher course.

Our friendship came long after his professional career started at the age of 22 at radio station 4AK in Toowoomba. After gigs in and out of broadcast, he became an off-air program director at 2KO Newcastle, and added work in front of a television camera to his repertoire. Maintaining good relationships with clients paid off when the Harvey Norman chain tapped him to be their signature voice. What had been a well known radio man was now a nationally known voice.

Yet, in all the conversations we had, it never went to his head. The Hardy family is uniquely generous. Paul’s temper was famous, as was his generosity and loyalty. This was a guy you wanted on your side. And if you took care of him, he took care of you many times over.

He stood with Michelle for twenty-five years. He always spoke well and proudly of his bride and his children. He loves his family. That, perhaps, was the deepest link we had. His affection for his employees is genuine. They worked hard, and played hard. Paul had heart disease, and a heart attack about nine years ago. He made some changes for his health.

I was always aware that Paul and I had a solid friendship, but I realized how much it meant to him when, in May 2003, he asked me to write one of the eulogies for his dad, Ron Hardy. It was read by the Hardy children at the memorial.

We spent hours on the phone several times a year, no matter who was on the night-time side of the planet. Annually, we’d have our cultural exchange: glossy color calendars of famous Australian places, a dozen boxes of Tim-Tams, Vegemite, and assorted flotsam would make way northeast across the Pacific, and a few months later, a box of equally mundane trinkets, lotions for the ladies, spices from The Swamp and other items from the States would end up heading southwest.

A gift bottle of brain-numbing Aussie wine was cracked open during an ship-board supper in the Caribbean. The well-traveled, empty bottle sits on our souvenir shelf. One of my daughter’s favorite outfits is one she got from her far away friends.

Two weeks prior to his passing, I sent him an e-mail letting him know a very long overdue cultural exchange package was on the way. Some locally produced seasonings, local barbecue sauces, and my favorite local orange blossom honey. The official brochure for the 2009 Mustang line. And, a tiny “Hot Wheels” toy car, a Mustang, of course.

He wrote back that he’d be watching for it.

It arrived a few days after he died.

Paul’s wife, Michelle, let me know that they decided to send that little toy Mustang along with Paul. We were touched. We feel that a small part of us is with our brother, to continue the friendship we build over the last almost eight years.

The beer I forever owed him (and he to me) will have to now wait. As 2008 drew to a close, my wife and I had a tearful toast to absent friends.

We lovingly ask for clear skies and following seas to our dear Hardy family, and may the memory of our beloved friend and brother Paul continue to be bright for our lifetime.

March 01, 2001 6737
By Steve Cunningham Production people are always looking for something new and different with which to mangle sound. We run our promo tracks through plug-ins that filter, flange, and distort in an effort to build breaks that...
Read More...
© 1988 - 2022 Radio And Production, LLC
Go to Top