This month brings us a two-fer, consisting of two products I recently installed for a voice actor as part of a home studio refurbishment.

This individual already had a suitable notebook PC running Adobe Audition 3 on XP, using an inexpensive USB audio interface to capture the sound from a Chinese-built large diaphragm condenser microphone.

He told me he felt his room just “wasn’t working” as well as he’d like, so I set about performing general maintenance on his computer and the signal path.

I had just finished tuning his room, when he announced that he’d like to replace his microphone with something that was a little “warmer” sounding. Then he mentioned that Leo Laporte uses a mic that he’d like to try, which turns out to be Heil PR40 dynamic microphone. This beast has been around for almost four years, and has become a standard amongst broadcasters and podcasters, giving the Electrovoice RE-20 and -27 a good run for their money. It so happens I’d requested an eval unit a little while ago -- perfect timing.

He also allowed as how he’d like a better preamp than the one in his USB interface, preferably one with EQ and compression built-in, but at a budget price. I’ve had my eye on a relatively new entry from Presonus, the Studio Channel, that seemed to fit the bill. A couple of phone calls and we had one available for an evaluation (and of course, a RAP column!). Let’s have a look.

Although it looks like a large-capsule condenser mic, behind the deceptive exterior lies an end-address dynamic mic that’s designed for voicework (as well as musical instruments). Given its physical attributes and extended low-end response (see the frequency plot), the PR40 will probably be compared with the aforementioned RE-20 and -27, although it has some characteristics of the Sennheiser MD421 as well. Either way, you know that if Bob Heil is involved in the design, what’s underneath will definitely be different. Bob Heil is both a ham radio enthusiast and a sound reinforcement expert with an impressive track record. In the early ’70s he set up the legendary “wall of sound” PA for the Grateful Dead, and his “Talk Box” created the talking guitar made famous by Peter Frampton. He’s since been involved with communications microphones, so he knows whereof he speaks when it comes to designing mics with precise polar patterns.

The microphone is assembled and tested at Heil Sound’s facility in Illinois from components made in the UK, Malaysia, Japan, China and Taiwan. It has a surprisingly wide frequency range for a dynamic microphone, covering 28Hz to 18kHz (-3dB). It’s designed to handle high sound pressure levels, but manages to sound more natural on voice than most cardioid dynamic mics, many of which have a colored sound due to the complex porting used to create their cardioid pattern. Although the frequency response is nominally flat between the upper and lower roll-off points, there is a very slight presence bump around 4 kHz, which gives a sense of air at the top end. 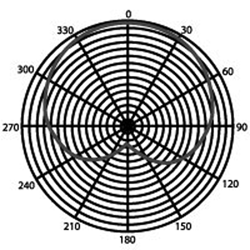 Heil’s approach to cardioid dynamic mics produces a tight polar pattern, with very high rear-rejection (see the polar plot). A 1.125- inch, low-mass diaphragm is combined with a neodymium magnet structure for a magnetic field that Heil claims is 10 times stronger than the traditional magnets in other microphones. Aluminum is used for the humbucking voice coil to reduce interference from nearby electronics, which means you can use the PR40 near CRT monitors and the like without fear of hum. Bass-boost from proximity effect has been minimized, as much as one can with a cardioid-pattern pressure gradient microphone.

The pop screen consists of two wire-mesh screens, along with what Heil describes as an internal filter. It does, however, keep popping to a minimum when the mic is used for VO work, and also helps avoid sibilance. The steel body is plated in a good-looking satin finish, and the XLR is at the back end where you’d expect it. The mic comes with a swivel mount (an optional spyder shock mount is available), and the whole business comes in a compact, foam-lined aluminum case.