I don’t know about you, but I carry around way too much stuff. And with airline travel having become the ordeal it is today, the situation has become worse, not better. The last couple of trips I made, one to San Francisco and the other Las Vegas, nearly involved a complete strip search at LAX airport. Needless to say, the TSA drones in the airport had lots of questions regarding my laptop, audio interface, and microphone. Methinks someone is trying to tell me that I need to cut back on my carry-ons. This month’s review features a couple of items that take care of exactly that problem. They’re small, they sound good, and I’m betting that they’ll create a lot less intrigue at the airport.

On one end is a protruding XML or female Jack, while the other end is home to a mini USB connector. It includes both phantom power and a 1/8-inch jack for headphones monitoring. Most importantly, it works at 16 or 24 bits and from 44.1 kHz up to 96 kHz.

I have paired the MicPort Pro with one of the smallest microphones I know of — the Countryman E6i omnidirectional headset mic, although Countryman calls it an “earset” mic. This little condenser is so small that if you order it in a color to match your complexion, folks won’t know you’re wearing it from 12 feet away. Just the thing to get you through the airport screening process. 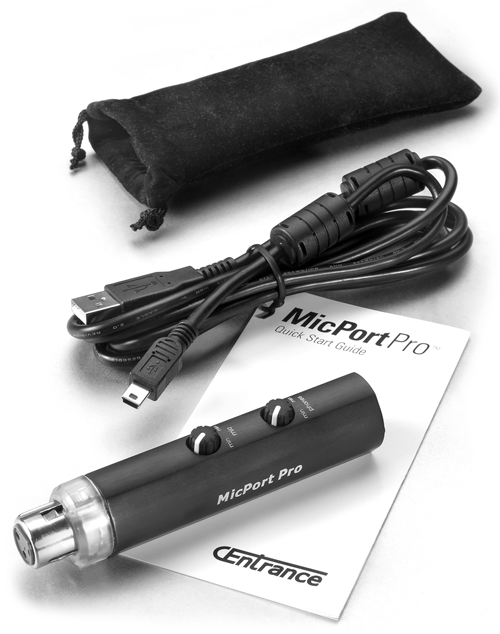