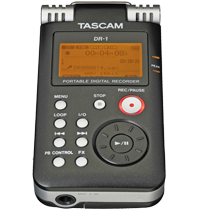 Tascam has announced the DR-1 Portable Digital Recorder, a compact unit that captures hours of music using built-in mics to its 1GB SD card. A pair of microphones is mounted on a variable angle mechanism, which allows the recorder to record from almost anywhere. The unit includes a generous 1GB SD card for hours of recording at MP3 or WAVE file formats. The DR-1 also includes auto gain control and analog limiting for easy setup and a low-frequency cutoff to eliminate handling or wind noise. Features include: 48 or 44.1kHz / 24-bit recording resolution, rechargable Lithium-Ion battery, USB 2.0 connection to computer, built-in Tuner and Vocal Cancel features, and an overdub feature to record narration, singing or instruments over an existing recording. MAP price $299.  www.tascam.com.

SM Pro Audio introduced the new HP6E multi-channel headphone amplifier. The HP6E is a high-quality, powerful, flexible, and reliable six (6) channel headphone amplifier housed in a sturdy 1RU 19" standard rack-mountable metal chassis. The HP6E boasts a variety of improvements over the original HP6 including improved frequency response, additional power, digital control of input selection, and a fifth mix input. Built in flash memory has also been added to allow for last state memory recall of the input selection for each channel. The HP6E’s flexible design allows any of the four (4) available audio input source signals to be routed to any of the 6 Class A headphone amps provided on the HP6E. An additional fifth stereo signal can also be mixed into each individual headphone channel. This allows for endless application support including studio monitoring, live monitoring, in ear individual mixing, signal distribution, and more. Features include: 10 TRS inputs, 5 stereo channels, auto sensing switch mode power supply, nominal output @ 32Ohm 600mw per channel, frequency response @100mw output 20Hz-20kHz +- 0.3 dB. The HP6E carries a list price of USD $249.00. www.smproaudio.com. 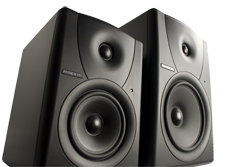 Violet Audio recently introduced the DX16XI and DX16XT,high performance 16 channel 3 way audio signal splitter units. The DX16XI is a pure path split, whilst the DX16XT offers transformer isolated audio splits. Primarily designed for microphone signals, the DX16XI and DX16XT are flexible units suitable for use in live performance and recording environments where split audio feeds are required to be simultaneously distributed to the FOH, monitor console, and or recording engineer. Connectivity is provided with 16 XLR inputs and outputs on the front panel, with a further 32 channel outputs in the form of XLR and 25-pin D-Sub on the rear. Entirely passive, neither the DX16XI nor DX16XT require a power supply. A sturdy 2RU metal chassis construction ensures maximum durability for the road or studio. www.violetaudio.com. 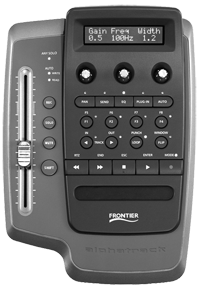 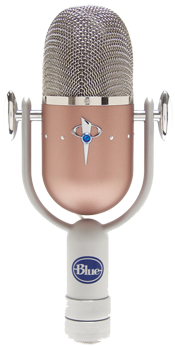 Blue Microphones recently unveiled Joe, a high-quality condenser microphone for the project studio. The newest addition to Blues award-winning microphone line, Joe is a cardioid large diaphragm condenser mic featuring Class A discrete electronics and hand tuned and tested capsules built on the pedigree of Blue mics like the Dragonfly, Kiwi, and Bottle microphone system. Joe is designed to capture a wide variety of sound sources, such as vocals, acoustic instruments, drums and more, with excellent detail and clarity. The microphone cable plugs into the mic clip, leaving the capsule housing “floating” in balance to accommodate a wider range of positioning options. $499 MSRP. www.bluemic.com. l 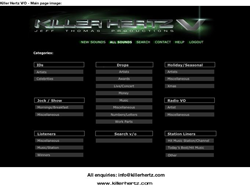 Sharon Baer has joined Megatrax Production Music in Los Angeles as Division Manager of Radio for the US and Canada. Baer left her position as Senior Regional Manager of Radio at FirstCom Music after 11 years with the Universal owned company. Sharon’s shift to the independent music sector is one she was glad to make. “With huge corporations taking over most of the syndicated production companies around the globe, it is exciting, refreshing and liberating to now be a part of the largest privately owned syndicated production companies in the industry, Megatrax!” Megatrax offers seven libraries with compositions in every style. Sharon can be reached at 818.255.7149 or .

Bryan Cox is chosen to host the nationally syndicated radio show “Old School with Bryan Cox,” the latest addition to the lineup at Borderline Radio Network. Cox has 25 years of media under his belt, from imaging radio spots to hosting his first radio show, where he called upon Charlie Daniels to be his first interview. Bryan, a successful comedian who has opened for the likes of Tom Jones and is heard online each week on the feature “Road Stories of the Real Highway Comics” by an audience of 3 million people, prefers working with clients from his home recording studio, one on one. www.borderlinenetwork.com.

ComicWonder.com recently announced that Chris “Captainhilariousness” Cashman of Seattle tallied the most laughs in the first ever audio-based, online joke-telling contest. Launched in December 2007, ComicWonder.com is an innovative Web site where people just type in their phone number and the site automatically calls them so they can record their joke—similar to leaving a voice mail message. Once the joke is on the site, the world listens to it, votes on it, shares it with others and ultimately decides who is the best joke teller. “Cashman’s joke-fu has proven to the world that a joke in the hands of a master can actually be a beautiful thing,” says Jeff Fitzsimmons, Comic Wonder Co-Founder. “As the Comic Wonder of the Year, he’s proven our point that a joke truly isn’t a joke until it’s told. As a result, we now hope that there is one less text joke in your inbox today.” Along with the announcement, Cashman was given a $2,500 cash prize and a T-shirt with the phrase, “I’m saving the joke. Ask me how.” emblazoned in real gold, and that, according to Cashman, was something he had to have. “Even though fame and fortune is looming,” says Cashman, “it was really all about that T-shirt.”

Debut Broadcasting Corporation Inc., a media and entertainment company, announced that it has named one of its producers, Mike Michonski, as the Director of Creative Services. In his new position, Michonski will oversee the growing line-up of production resources (including imaging, commercial production and production libraries) offered through Debut’s radio syndication arm, Impact Radio Networks™ (IRN). Michonski began his career in Lafayette, Ind. with Rockford, Ill.-based Radio Works as a weekend on-air personality, and has assumed various positions within the radio industry throughout his career. In 2003, Michonski accepted assistant program director and on-air personality positions with Clear Channel’s 98.1 Kiss FM (WKXJ) in Chattanooga, Tenn. Soon thereafter, he was promoted to assistant production director to oversee all of the Clear Channel stations in the Chattanooga area, while still fulfilling the duties of his other positions. Michonski was hired by Debut Broadcasting™ in August 2007 as a producer/engineer, but comes into his new position from his role as the digital fulfillment manager. Through its entertainment arm, Impact Radio Networks™, Debut sells pre-recorded radio programs and related services to more than 1,400 AM and FM stations in the U.S. and Canada, and reaches more than 45 million listeners per week. The company also provides marketing, consulting and media buying for its radio broadcast stations. Through its media division, Debut identifies and acquires (or manages) underperforming and undervalued media properties in the US. www.debutbroad casting.com.

September 01, 2008 3334
Jim Kipping, Creative Services Director, Emmis Broadcasting, Austin, TX By Jerry Vigil How many times have you said, “One of these days… I’m going to buy me a piece of land outside of town and build my dream home, with my dream...
Read More...
© 1988 - 2022 Radio And Production, LLC
Go to Top