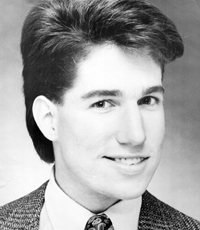 Two years ago this month, we interviewed Power Pig Operations Manager Marc Chase who talked about a guy that "blew through the radio station" for a brief period of time: "I really didn't have a place for him, but he had huge pipes. So we brought him in as a Continuity Director. I knew that wasn't going to last...." Marc was right. Paul Turner has since climbed the ladder of success at an incredible pace. At the young age of 26, he currently does voice work for over 100 television and radio stations. He is the voice for the majority of Infinity Broadcasting's stations. He's also the voice of the Howard Stern Show, the G. Gordon Liddy Show, and the Greaseman Show. And Paul's just getting started....

R.A.P.: Tell us about how you got into radio.
Paul: I had an idea of what I wanted to do with my career all the way through junior high and as early as elementary school. While most of my friends wanted to have the typical jobs, I knew in some way I wanted to be involved with broadcasting. I was doing some writing for the school paper one year, and I interviewed a local television sportscaster. He invited me to sit in with him while he did some play-by-play at a basketball game. From that point on, the bug caught me, and I pursued it.

There was a campus radio station on the university right near where I went to high school. It was completely student run, and these students looked at me as kind of a novelty -- "Hey, here's a little kid hanging out. Let's make him our mascot." And that's basically what happened. In the summer, I'd be waiting for baseball practice and would hang around, ask questions, and do whatever odd jobs they needed. This was a little 327 watt FM in the western part of North Carolina, and the students had full rein of the place. In the summer, a lot of them would not show up for their particular shows. This happened one day and they said, "Hey, let's let this little kid get a shot," and they put me on the air. That was my first time on the air. I was fourteen.

R.A.P.: What happened next?
Paul: I was at the campus station for about a year. From there I went to a commercial radio station in town, WRGC-AM, and keep in mind, this is a tiny little community out in the country, Silva, North Carolina. There was really only one AM signal aside from the FM signal at the university station. One day, I just sent them a letter saying I was interested in working for them, and it was very coincidental that they happened to be looking for someone, just a warm body to come in and run the board on the weekends for a couple of shows. I took the job and ended up staying there for five years. This is where I first got paid for being on the air.

I went on to program the station before I left. I worked there all through high school, and that station was very good to me. It was one of those deals where you become jack of all trades, and you really learn production. I learned a lot there, and I'm very thankful to them for that.

While at WRGC, I entered Western Carolina University. I stayed with WRGC and also worked at the campus station, as well as another station in Franklin, North Carolina. So, I was back and forth between three radio stations a day, and it was big time overkill. I found myself just going crazy, but, at that age you have all the energy in the world. You just want to soak up as much as you can about the business, and you're easily influenced in a very positive way by a lot of the people around you.

Disk jockey was my main goal. I think that's why a lot of people enter the business, and that leads them to a lot of other things like production. But the glamour and the ability to meet people and interview exciting people was all very attractive to me at that time.

My voice began to naturally develop as it does at that age, and I found that my voice was opening some doors for me. There's a radio station in Asheville, North Carolina which was a much bigger market for me than anything up to this point. It's actually the Asheville-Greenville-Spartanberg market. During my freshman year in college I was offered afternoon drive at WKSF in Asheville, which was a tremendous step from weekends or part-time at these other little radio stations. This station is where I really got a taste of production. It had two multi-track studios, an 8-track and a 4-track. It was an AM/FM combo. I did afternoons for about a year and a half, and while there I also became the voice of the station. I did promos for the first time and found that doing promos was something I really enjoyed. I would emulate whom I considered to be my heros -- Joe Kelly and some of the bigger guys. I'd listen to their tapes and try to get as many ideas as I could from them. The Program Director of WKSF kind of just let me run with it, and it was a great opportunity.

My next move was another big jump. I went to Tampa for my first full-time production job at WHVE. I found while working at WKSF that production was what I enjoyed, and it was what I seemed to get the most positive feedback on. People around me were saying, "You know, this is something you ought to be doing. You ought to be pursuing the production end. You have the voice for it." Even when I was at WKSF, I was doing voice-overs for other stations in the chain, little markets in Wyoming, here and there. So, I went to Florida, to WHVE to do production. It was an NAC station, believe it or not. I've told a lot of people that I worked for an NAC station, and they kind of frowned or said, "Oh, how could you stand it?" But, I've got to be honest with you. That was a tremendous experience because being a one trick pony, doing CHR or AOR for so long, can get kind of comfortable, and it can almost become dangerous. Being at an NAC station taught me to back off. It taught me a whole different style of production.

Moving to Tampa was very instrumental in my career because there's a station there that I think most of the country knows about by now called the Power Pig, WFLZ. It's programmed by one of the biggest geniuses in the business, Marc Chase. They went on the air while I was in Tampa, and I knew they were about to come on. I made some inquiries, and Marc and I went out to lunch one day and hit it off. Jacor, who owned the station, had remained pretty loyal to a lot of the employees including their Production Director. They brought in a guy by the name of Brian James, a veteran, more experienced promo guy than myself. I was still very much of a kid at that time. But Marc wanted me on board, so he brought me in under the auspices of some assistant production guy or continuity person. I used the continuity desk, but nonetheless, my main job was really voicing a majority of the high energy nightclub spots and some of the promos for the AM, WFLA-AM, and the FM, The Power Pig. They had some beautiful studios, and that is where I learned a tremendous amount. I learned so much from Brian and Marc, some of the most creative people in the world, and Randy Michaels, who was the programming head of Jacor at that time. Creatively, that was the biggest growth spurt I had experienced up to that time.

I was there a little less than a year when another opportunity came. I received a call one day from Chuck Beck in Detroit at WDFX. I went to Detroit simply for the fact that it was a market size jump and a little advancement in pay, and because I considered it to be the next step in production. By this point, production had become the obvious goal in my life, and along the way I started to pick up some side business from a little voice-over business that I had started in Tampa. A couple of guys I knew who ran radio stations back in North Carolina said, "Hey, you have a deep voice, and it's becoming more well trained. It seems like it would be more of a sweeper/promo voice. Could you do some stuff for us?" One thing led to another, and by the time I left Tampa, I had a handful of clients -- eight, ten clients that I did on a regular basis. Nothing major, no really big markets, but enough to tell myself that there was something there and I should pursue it.

I was in Detroit for a little less than two years. There were some ownership changes. I wasn't fired. I just left on my own accord to come here to Philly. But, again, I enjoyed my time in Detroit, and I learned a different angle from some more creative people like Chuck Beck. It was a CHR station in a major market. We were competing with WHYT, and we had a good time. We didn't knock anybody down with our ratings, but we had a good time, and it was a good bunch of people.

By the time I left Detroit, I had amassed twenty or so clients that I was doing voice-overs for on a regular basis, the majority of which were radio stations. I had sent a demo to a guy in Washington, D.C. who had inquired about having me do some stuff. The tape somehow ended up at the WJFK studios in Washington which, as you know, is an Infinity affiliate. Tim Sabean, the current Program Director at the station where I'm based, heard the tape. One thing led to another, and he offered me a job to come and be basically the voice guy for Infinity based out of WYSP here in Philadelphia. And that's how I got to where I am now. I've been at WYSP about two and a half years now.

R.A.P.: Did Infinity put you on immediately as the voice for several of their stations, or was that something that happened over a period of time?
Paul: I was hired to be the voice of WJFK in Washington and also WYSP. Plus, I did some for WXRK in New York. Those responsibilities have obviously grown to include several Infinity stations for which I'm now the exclusive voice for. I even do one of their country stations down in Tampa, WQIK AM and FM. It's a very male-oriented demo that Infinity seems to have, and that's the type of production and voice-over work that I enjoy. I do KOME for them in San Francisco/San Jose, WXRK in New York and WFAN-AM in New York, a sports station. I do WYSP in Philly, WJFK AM and FM, Baltimore/Washington, and I do all the voice stuff for Howard Stern. Howard is really the big story behind all this. I also do some stuff for the Grease Man, the syndicated show, and also for G. Gordon Liddy. I do all of his voice stuff.

June 01, 2001 3359
Lou Kastler, Production Manager, Journal Broadcast Group, Omaha, Nebraska Back in the day, there wasn’t much discussion when it came to selecting the multi-track recorder for the production room. There was 4-track and there was...
Read More...
© 1988 - 2022 Radio And Production, LLC
Go to Top