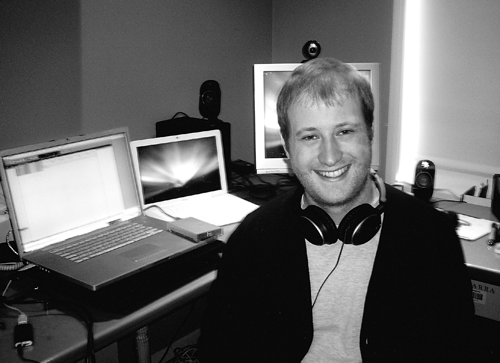 Each year, we try to visit with at least one or two of our RAP Awards trophy winners, especially newcomers to that short list. Taking home the top prize for Large Market Promo this year was Arden Hanley, Senior Imaging Producer at Capital Radio in London. Recognition for his work is nothing new for Arden; he has many other awards under his belt from competitions in Australia, New York, and the UK. We get better acquainted with Arden in this month’s RAP Interview, who started his radio career in Australia at the very young age of eight! After a rapid rise through major stations in Australia, a sight-seeing trip to Europe eventually turned into permanent residency in the UK, where Arden now handles the imaging for one of London’s first commercial radio stations. Be sure to check out this month’s CD for an awesome sampler from Arden, including his award winning promo.

JV: How did you get your start in radio and what were some of the highlights in your early career?
Arden: I started off in community radio back in the area where I grew up, a radio station called FM 104.7 in Morwell, which is in part of Victoria called Gippsland, obviously in Australia. This was in 1987, and I was eight years old at the time. I used to do an after-school show. I was rather lucky that at that time the station did have a fair amount of younger people involved who were learning radio and volunteering at the station, although I was the youngest there. I always had an interest in the more technical sides of radio, and luckily for me I got the chance to volunteer in their production studios, as well as doing my after-school show. The majority of work I did on tape before the digital explosion actually happened at that community station with a splice block and razor and three 2-track tape machines to put things together. After that I was lucky enough to work mostly with digital systems, as around the time I started in commercial radio, the first digital systems were coming into Australia, and I managed to move into jobs just after they were introduced.

So I used the skills that I learned as a volunteer in a community station to get my first full-time job at the local commercial station, which was called 3TR. Then when I was 16, while I was doing high school, I got a job tech op-ing the local football call on the local commercial station. That was in 1995. While I was there, I was very lucky to have quite an understanding and inspiring PD who let me try out everything from announcing to production to some writing, and he really helped me develop my skills along the way. When I finished high school in 1997, he’d moved on to another station in Victoria called 3SH in Swan Hill and asked me if I’d like my first full-time job in radio.

So I had my first real radio job at 3SH in Swan Hill at the start of 1998. We were a staff of 5 people running 2 different formats out of that building, so I got to be an announcer, a copywriter, production guy, and even read the news a couple of times when we were short of staff, as I think a lot of people who start off in radio do. The smaller stations are a great grounding to try a whole lot of different things and see what works best for you and where your passion in this industry lies.

JV: And what did you find about your passion at that time?
Arden: I found fairly early on that not only was I a much better production person than I was in front of the microphone, but I also enjoyed that side of things a lot more. So I started developing my production skills and trying to make contact with some of my industry peers and sort of soak up all the knowledge that I could.

After that, in 1999 I went to a duopoly in Canberra, which was FM 104.7, a rock station, and Mix 106.3, which was a 25+ female-skewed AC station. That was my first production team there. I was hired by a guy called Mark Jennings, who I think had been in that market for probably five or six years by the time I arrived and had a long history of big markets in Australia under his belt. I was lucky to work with him, and he sort of taught me a lot and got me prepared for working in big radio stations rather than smaller stations. That was the first time that I had a job which focused me solely on doing production, and I really started to hone my craft there.

JV: Where to next?
Arden: Later that year, I think in no small measure thanks to some great guidance from Mark, I moved on to Today FM in Sydney to work on the Hot 30 Countdown, which was at that time, and still is, a national night show around the country. At that stage, I was working in the production department, but day-to-day on the show. It was a small team of us that were putting together the nightly countdown every night, editing a lot of celebrity interviews and such. It was a lot of production that needed to be done on a nightly basis — comedy sketches and various bits of imaging for the show. That was also my first major market experience because Today FM at that stage, and I believe it is again right now, was the number one music station in Sydney. So being based in that building you got to work with the best of the best in the radio industry at the time. That was a fantastic grounding and a fantastic station to develop your production skills in because you had a big reputation to uphold there.

After that, I went to Nova 100 in Melbourne, which was the second of the Nova radio stations to launch in Australia, and I was part of the launch team for that station. I had the fantastic experience of joining a team where we got to build a radio station from the ground up. That was in 2001, and we started off as a team of 3 production people covering all the sort of production needs of the radio station leading up to launch day, working in various studios around Melbourne, wherever we could get studio time while our studios were still being built. They built the production studios first, and in the last week and a half preceding the actual launch of the radio station, once the builders had left for the day and it wasn’t a construction site anymore, we’d go in there and work at night and do all the production for the radio station until the builders got back there at 4:00 or 5:00 in the morning. We’d clear out and go get some sleep while the builders carried on putting together our radio station.

JV: You eventually left Australia. When and how did that happen?
Arden: Nova was the last station I worked at in Australia. I was there from 2001 through to 2006. Then in mid-2006, my partner and I decided that we’d like to go and see the world and see a whole lot of Europe before we got too old and responsible. My partner has British parents, so we made our first stop in the UK, London, and we’ve been there ever since.

In addition to my work with Nova, I was lucky enough by this stage to have started consulting a radio station in Germany called Big FM, a big CHR station. They cover a fair proportion of the southern half of Germany, and they’re based in Stuttgart, which is the home of Mercedes and Porsche and a whole lot of very nice cars. After moving across to the UK, my first bit of work was sort of upping my commitment to them, now that I was on the same side of the world as them. I built a bit of a network of contacts in the UK and made sure everyone knew who I was and knew I was there and available, and after a few other small projects for a station called FM 107.9 in Oxford and XFM in London, I was lucky enough to land a gig at Capital Radio in London.