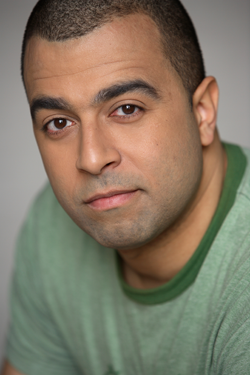 Times are a-changing out there. Not long ago, Spanish stations could only be found on the AM dial. Now, it’s quite common to see Hispanic targeted stations in the top 5, beating out some of radio’s historically unbeatable stations and formats. How has this affected the voice-over business? For one, it has created a fast-growing market for people like Anthony Mendez, who only decided to jump into the VO biz three years ago. His timing could not have been more perfect. In this month’s RAP Interview, Anthony gives us some insights into this growing market, how it has changed and what’s to come. Check out this month’s RAP CD for a sample of Anthony’s VO work.

JV: When and how did you get started in the business?
Anthony: I actually started, believe it or not, in March of 2004, and it’s just skyrocketed since then. I think I just entered the business at the right time in terms of what my brand is, being Hispanic and having an urban flavor. It wouldn’t have been – I don’t want to say easy because it hasn’t been easy; it’s still been hard work — but it just wouldn’t have been as accepted, let’s say, even five years ago for me to be able to do the things that I’ve been able to do.

Prior to that, I had left my daytime job in October of 2002 in order to try to get into the music business. I always had the idea that I wanted to be in the music business as a singer, as an engineer, as a producer, mostly for hip-hop stuff. But that business wasn’t conducive for a family. I set up my studio right where I still have it here in Jersey City, and the artists used to come in at 9:00 or 10:00 at night. The guy that was singing brought along like eight or ten of his boys. It was just crazy. I used to get out of here at 4:00 or 5:00 in the morning, mixing stuff, doing demos. I even did some presentations of some possible tracks for Daddy Yankee here before he went MTV. But again, the hours were crazy. I used to get home at 4:00 or 5:00 or 6:00 in the morning. At that time my wife was getting up to go to work, so that wasn’t really working out.

Then in March of 2004 I read a book called The 80/20 Principle that said 80 percent of your income comes from 20 percent of your work. At that time I was producing some local radio commercials here for Spanish radio. They were broadcasting on WSKQ here in New York. I realized that most of the direct money – because in the music business you get your money in the backend if you get any at all – most of the money I was making was coming from radio production and not the music business.

So I said, let me just cut the music engineering part out. I don’t have to work the late hours. The guy that used to do the voiceovers for WSKQ used to come into my studio, drop the vocals, and I’d produce it. I only had to deal with one person instead of dealing with an entourage of artists, and the hours were a lot better. So that’s basically how I took the first step into just doing voiceovers, but it was only production at the time.

Then one day he took a couple of weeks off, and my client had me do the voice work. They were happy with the work, and they kept me onboard for another station they were advertising on. That’s how it all started. So I kind of fell in love with it because I substituted for somebody else. It was pretty interesting, and that was in 2004.

JV: That’s quite a step, going from engineer to voice-over artist in New York in one quick step. Have you had any formal voice training?
Anthony: Well, as you know, here in New York and across the country, the trend has been to have reads that are more from an actor’s point of view, a realistic conversational read versus the heavy announcer read. So I started taking some scene study classes. I did a couple of shows in theater and stuff like that. I think that helped me. I took some improv classes as well. But my voice has a bottom range, so as much as acting is concerned, I was always going to be aiming for promos and imaging and stuff like that anyway.

JV: It’s remarkable that you’ve been able to transition into voiceover so quickly and with good success. Are you staying busy?
Anthony: Day and night. The good thing is, I’ve been blessed to have a wife that supports me in everything that I do. She’s been very patient in order for us to get to where we are now. I’ve been lucky enough because of that support that I haven’t had the distraction of a day job. So every waking hour, if I’m not auditioning and doing voiceover sessions, then I’m thinking of my next marketing move, whether it be sending out postcards, sending out emails or making phone calls.

Business has been good, but this year’s been a little tougher, I think. But at the same time, I have accomplished certain milestones in terms of getting my representation on both coasts, New York and Los Angeles. Now that I’m union, it’s obviously more competitive, and I’m doing higher-end work. In my non-union days, it was a quantity game for me. I used to do a lot of stuff, small tidbits here and there. But once you go union, obviously, I decided to just strictly do union work. So it’s a little different game for me now.

JV: How’s life with the agents?
Anthony: My agents have been great. I’m represented by Atlas Talent here in New York and Vox out in Los Angeles. And they understand that although I speak Spanish and that I have an urban flavor, I do more than just Spanish reads. They send me other general market work as well. And that’s something that with my prior agent, which will remain nameless, I wasn’t getting. I was getting between 85 to 90 percent just Spanish work and Spanish auditions. Here in New York it seems like once they know you speak Spanish – although there’s less competition in Spanish — that’s all they tend to send you on. But I was born and raised in the good old USA, so my language of affinity is English. Granted, it’s injected with an urban flavor and my Hispanic background, but it’s still English. I think my new agents have seen that and understand that, and they can also understand that I can straighten it out for certain reads and general market reads. So they have been giving me more opportunities for a broader market than just Spanish.

JV: You’re still doing both Spanish and English reads though, right?
Anthony: Yes, I’m doing both Spanish and English, but the growing aspect of my career is the acculturated reads, in other words, the English read or the urban English read or even the Spanish-English read. But the growing part of my career is English, and I’m doing more English than Spanish now. Which is great because I think it’s a misconception that the public has of what Hispanic really is. If you look at the United States for example, most people don’t know this but the majority of Latinos in the US are English-speaking, US-born Latinos. The problem is that the term Hispanic reflects language spoken. So, for example, when Nielsen takes their ratings for Hispanic TV, their ratings are based on language spoken, but it’s not really a reflection of what programs Latinos really watch. For example, I don’t watch Spanish television. The only time I watch Spanish television is when either my in-laws are over or my parents are over at our house, and they’re watching their news or their telenovelas. That’s the only time I watch it. In the US, English-born or US-born Latinos see Spanish TV as the channel for our parents and our grandparents. We watch English.

It applies to radio as well. For example, here in New York the majority of my Latino friends listen to Power 105, Hot 97 and even Z100 and ‘KTU. Of course, there’s the occasional tuning into WSKQ 97.9, but in my age range and younger, if they are going to tune to a Spanish station they prefer WCAA over 97.9. The overwhelming reason is because WCAA has more of an urban influence in its programming. They play more hip-hop influenced music, and on Friday and Saturday nights they play more hip-hop and reggaeton, which has become a big thing now, sort of a Spanish reggae with a hip-hop influence in it.

August 01, 2010 2207
Johnny George, Johnny George Communications, Fishers, Indiana You’ve been hearing Johnny George’s work on the RAP Cassettes and CDs for years. Back in 2006, after a long stint with Susquehanna in Indianapolis, Johnny made the...
Read More...
© 1988 - 2022 Radio And Production, LLC
Go to Top