Q It Up: If you could talk to the programmers of Pro Tools, Adobe Audition, Sony Vegas and the others, what program modifications would you ask for? - Part 1

Q It Up: When the digital world took over our radio production rooms, only Orban’s Audicy was created for “us”, and it had a good run (and continues to survive in many studios), but it is quickly becoming extinct. With the discontinuation of that DAW, we have all been left to work our craft on software programs designed primarily for music and video post production. What are your major complaints about these workstations? What would you like to see in the way of improvements to make them more “radio” friendly? If you could talk to the programmers of Pro Tools, Adobe Audition, Sony Vegas and the others, and could have anything you wanted, what modifications would you ask for? 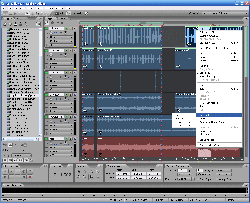 John Melley [jmelley[at]boston.cbs .com], CBS Radio | WBMX, Mix 98-5, Boston, Massachusetts: I use Adobe Audition 2.0 in my studio. It has a lot of good features and I generally like it, but it has some annoying quirks. For example: let’s say you record a VO on track 1 and then lay down a music bed on track 2 to put under the VO. If you select both tracks to do a Mixdown, it puts the mixdown in the track right below the last track you selected. That’s expected. Let’s say it will go into track 3 for simplicity. The problem is that if you had anything else in track 3, either before or after the waves you selected for the mixdown, those other waves in track 3, and any other waves on the tracks below track 3, get bumped down to the next track - even if the waves are grouped with other waves in other tracks.

It also re-numbers the track you just put your mixdown into. It labels it as the next highest track in the whole project. That means, if you were already using 10 separate tracks in your project and you created a mixdown that you expect would end up in track 3, the program says “Okay, this session already has 10 tracks, the next number would be 11.” So it labels the track the mixdown is placed into as track 11. It may visually look like it’s the 3rd track down, but it’s labeled as track 11.

It can be very confusing and results in my having to frequently re-shuffle waves to get them arranged in the way they were, as I was working with them.

The other problem with the “Mixdown” feature is that it isn’t called “Mixdown” in the Edit Menu. The previous version of the software – when it was Cool Edit Pro — called it a “Mixdown.” In this respect, I’m told Adobe mimics Pro Tools here and calls it a “Bounce.” However, the end result of the “Bounce” feature is a wave labeled “Mixdown” like it used to be in Cool Edit Pro (CEP). It lacks a certain amount of consistency.

That’s a lot of kvetching for a problem that’s fairly simple to work around... once you figure out what’s going on.

The other thing I would wish for is that the macros I created in CEP for processing VO’s and other pre-sets I had for certain treatments for my voice and other voice talent here could be migrated over to the Adobe Audition program. Unfortunately, I had a few that I really liked and I haven’t been able to bring them over or quite duplicate them in Audition.

Other than that, I generally like the program and it allows me to do what I need to do here at work. The time stretch and pitch bender are better than CEP’s was, and some of the presets in the delays, EQ, etc. are more intricate. The compression plug-in is also a lot more sophisticated than CEP’s was. Steve Stone [sstone[at]zrgmail.com], Zimmer Radio, Joplin, Missouri: Other than mastering my rock band demos on 1/4" tape, I’m virtually a stranger to the splicing block. Lucky for me, I got into this business right when SAW was on its way out and Pro Tools, Cool Edit, etc were in. I personally was a Syntrillium baby, weaned on Cool Edit Pro (I still have the primative original on my laptop for kicks).

One thing that I’m very picky about is effects. I prefer outboard. I’m sorry, but no software generated effects will ever sound like a Lexicon. Only recently have professional rack-mount effects manufacturers begun implementing a VST interface via USB. These are the companies that will get my money. I would have liked to see the developers of early multitrack software work more closely with the effects manufacturers. VST could have been a lot farther along than it is.

Also, Ryan Keith, our resident imaging wizard, had a wonderful idea. VU meters — two big ones for left and right, and a small one on each track. Many producers (myself included) prefer a needle over a green stick that’s red on one end. Call us “Old School” but I’d bet we number in the thousands.

As far as making it more “Radio Friendly,” I’m at a loss. I’ll be interested to read what other RAPsters come up with.

Brian Wilson [wizman440[at]hotmail .com], ABC Radio Networks Jack FM, Dallas, Texas: Just the other day, I was thinking about how far my production environment has come along in 30 years. In the beginning, we had to use old Garner Ted Armstrong tapes for projects since we never bought fresh tape for ourselves, slip cued sound effects off vinyl, and two cart machines loaded with music to give the spot a “multi-tracked” sound. No mic processing or noise reduction. In fact, the Revox tape deck had unintentional vari-speed, the pitch depending on how heavy a reel of tape you used.

Personally, I couldn’t be happier with Cubase, which has good midi implementation, great plugins, and a pleasant interface. I can’t think of anything I wish it would do that it doesn’t already. I’m sure Cubase does far more that I even realize, as I’m terrible about reading manuals. But I’ve used it with great results for 5 years without cracking the manual, so that says something about Cubase.

Perhaps radio software should have some of the functionality removed. Too many features can be intimidating to some DJs, so make it simple left-to-right easy. Record, play, rewind, edit. Keep the plugins to time squeeze, reverb, EQ and compression. Limit the EQ boost to +/- 6db so the jocks can’t screw it up too much.

But make my software fat with exotic plugins and unlimited tracks!! Yay Cubase!!

Jeff Berlin [jberlin[at]jberlin.com], www.jberlin.com: I wish Pro Tools had a “consolidate regions” command. And I wish it could bounce faster than real time. But that’s it. My previous Pro Tools wishes have all come true: paste BEFORE command; slide/separate/region artifacts -- hard to explain; user selectable pre/post fader sends -- I was screaming for these functionalities, and they were all implemented in later versions. (It’s possible my input had something to do with that thanks to Brian Dozier at Digidesign.) I’m still on Pro Tools 6.x -- apparently in Pro Tools 7 you can organize your regions. Otherwise that wish would be on my list as well.

FWIW, Bob Spicer and Tony Baglio at Greater Media Boston are still using Orban Audicys, but are now in the process of switching over to Pro Tools.

Ian Fish [Ian.Fish[at]chrysalis.com]: Dear ProTools/Digidesign Programmer: please, please, please give us an option to “bounce to disk” in faster than real time. I know your plug-ins sound lovely when fully rendered to 24 bits, but we just compress it all to death anyway for transmission. And whilst it’s good to have the best starting quality possible, sometimes a bounce down that takes seconds instead of minutes is a happy trade off. I would invite you to sit through the bounce down process for our travel sponsor beds, each over 3 minutes long and there’s 21 variations. That’s an hour of watching a blue bar crawl across the screen -- if it was feasible to do them all in one go. But when you’ve got to bounce each one, individually, in real time, it just gets boring. Takes about 15 minutes to make them all and 90 minutes to bounce. Love the rest of your product though, can’t wait for my upgrade to v7.3, which of course came out about 15 minutes after we’d bought the upgrade to v7.2!

January 01, 2008 9657
by Steve Cunningham To say that Adobe’s Audition is a staple of radio production would be an understatement. Audition has been a favorite since it was Cool Edit and Cool Edit Pro, and we’ve looked at that product several times...
Read More...
© 1988 - 2022 Radio And Production, LLC
Go to Top