When last we were time-tripping back through the history of modern synthesis, we were among clean-cut mad scientist types in white coats, fiddling with auditorium-sized devices that were capable of cranking out all sorts of interesting beeps and boinks. Neato, huh? How ‘50s! But as the ‘60s dawned, with revolution in the air, it was inevitable that “established” ways of making electronic noise were going to both experience and be a part of massive change. 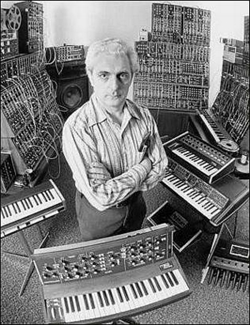 Enter Robert Moog (long “O,” rhymes with “vogue”). A child of the ‘40s, with bachelor’s degrees in both physics and electrical engineering, as well as a Ph.D. in Engineering Physics from Cornell, one might imagine Dr. Moog feeling quite comfortable as a white-coated, clean-cut mad scientist type… if he hadn’t been snared by the siren song of the Theremin. As we discussed last month, the Theremin’s warbly, surreal sounds were a staple of ‘50s and ‘60s sci fi soundtracks, and during the ‘50s Robert Moog founded a company that manufactured “build it yourself” Theremin kits. Had this been his life’s mission, Moog would probably be a footnote to León Theremin’s story, but Moog was determined to make his own mark.

In 1964, with input from several composers including Herbert Deutsch and Walter Carlos (who later became Wendy), he began to manufacture the first modular analog synthesizers. While not Astrodome-sized, the first Moog synthesizers were large, boxy things, with patch bays to hook one module to another, and plenty of knobs to tweak. Once a sound was created, the performer would either have to keep all the patches and knobs where they were, or draw a detailed diagram to reproduce the sound. This didn’t stop composers like Carlos and John Cage from creating artistic masterpieces with the Moog, nor did it deter rock keyboard pioneers like Keith Emerson and Rick Wakeman from making their Roadies haul the things from concert to concert. It was the perfect noise maker for the times, as musicians of many genres began to create “trippy” compositions for the tuned in and turned on generation.

As the ‘60s progressed, so did the Moog… adding new features, making it easier to use… if not to carry. Other manufacturers like Buchla and ARP produced modular synths during this time, but none seemed to garner the “hip” factor that Moog’s creations did… a hipness that only grew stronger in 1971 with the introduction of the non-modular Minimoog. While less flexible to program than its modular big brother, the Minimoog was both easier to play and to carry. It not only sold like crazy, but set the standard by which nearly all synthesizers would be judged.

While the different Moog flavors and their contemporaries were well respected and recorded through the ‘60s and early ‘70s, they had one glaring fault… they could only produce one note at a time. There were some attempts at combining electric organ circuits with synthesizer processing in the early ‘70s, but the first true polyphonic synthesizers didn’t begin to appear until the mid-‘70s, when keyboards such as the Oberheim SEM allowed the performer to play 2 to 8 notes at once. This meant that synthesizer players had finally caught up with their piano-playing brethren, and could play real, honest to goodness chords (more or less).

Around the same time, the breakthrough that had put a handheld calculator in every backpack began to be applied to synthesizers. In 1977, the Prophet-5 became the first programmable polyphonic synth keyboard that let the sound designer save all the knob settings in a microprocessor memory for a particular sound (or patch, as they continue to be called even today; a tip of the hat to the old Moog patch bay days). No more hand-drawn diagrams, no more tweaking… unless you had already filled up the 32 memory slots. Keyboard synthesizers had finally become truly a convenient and reliable instrument, both in and out of the studio, and demand caused a flood of new and improved designs from many companies. But another even numbered decade was coming, and once again revolution was in the air. It could be summed up in one word: Digital.

In the early ‘80s, the computer speak of 1’s and 0’s was hitting its stride, and any device that had a microprocessor was speaking it. Synthesizers went from analog sound generation to digital signal processing to create their sounds. In 1983 the music industry went crazy for a Yamaha… not one you rode, but one you played. The DX-7 was the first FM digital keyboard (FM synthesis uses sine-wave oscillators… we’ll get into that in the coming months), and came filled with tons of pre-programmed sounds. The sound quality was miles from what had appeared in the past, and its patches have been heard on thousands of recordings since. It also helped introduce another important advancement in synthesizer performance/programming, MIDI, or Musical Instrument Digital Interface. Via this communications protocol, electronic instruments, computers and other equipment could “talk” and synchronize with each other. While the DX-7 wasn’t the first keyboard with MIDI ports, it certainly holds the record as the most popular, and soon thousands of “Midiots” were running cables from keyboard to drum machine to computer, and creating synthesized one-man bands.

From there, innovations in synthesis came fast and heavy, because of demand, and because other companies wanted to match Yamaha’s success. In 1987, Roland knocked the DX-7 off the top of the heap with its D50, which was much more flexible to play with more control, and better sound due to Roland’s new LA synthesis. Samplers also became to appear, first merely as devices that recorded and played back existing sounds, later with synthesizer effects to mess up those sounds. Companies like Ensoniq, Kurtweil and Emu were the early winners in the sampler race, but Akai with their S900 became the standard by the early ‘90s.

Stand alone keyboard synthesis has continued to evolve and improve for the last two decades. I could ramble off the laundry list of landmarks, but bottom line is, if you go to any music store today, you’ll see that many have become stand-alone workstations, incorporating synthesis of all types, sampling, recording, sequencing, even CD burning into one package, with little use for even an outboard computer. The sounds run the gamut from the analog days to new, bizarre digital techniques… it seems that nearly any sound can be reproduced by today’s keyboard behemoths. Is there even a next possible step in the evolution of synthesizers? Oh yeah! Next, the virtual world of synthesis, or, “Look Ma, no keyboard!”