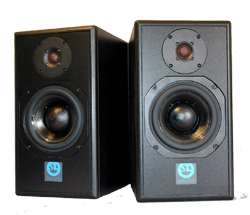 Las Vegas Pro Audio, the U.S. sales office of ATC (Acoustic Transducer Company - UK) introduced the new ATC passive SCM20SL loudspeakers. This offering represents ATC’s first venture into the U.S. pro market with a passive monitor. Designed to fit within the company’s highly-regarded line of speakers, the ATC “Passive 20” features the same woofer and tweeter as the active (SCM20ASL) version of the speaker. The SCM20SL passives are housed in a conventional “pro-black” box for easy placement on any meter bridge. ATC recommends amplifiers with at least 200W per channel of power. The Passive 20 loudspeaker enables ATC speaker fans to own a high performance monitor at half the price of the actives. The SCM20SL Passive low-frequency section is a hybrid design incorporating a 150mm bass cone with a grafted 75mm soft dome for mid-range assist. The woofer magnet assembly utilizes ATC’s “SL” technology to reduce third harmonic distortion and reveal mistakes and details. MSRP: $3,500/pair. www.lasvegasproaudio.com, www.atc.gb.net.

DakingPlus, a new joint venture created by Geoff Daking and Dave Thibodeau that is focusing on new digitally controlled versions of classic analog processing modules, has launched its first products. The initial offering is the DakingPlus EQ500, the four-band “A Range” equalizer for which Daking is known, and will be followed by the DakingPlus Stereo Compressor, which will offer higher performance than the current Daking FET II mono compressor by providing remote digital control of the analog circuitry. The DakingPlus EQ500, designed to fit various manufacturers’ rack-mount module frames, utilizes the same four bands, and five fixed frequency select points as the Daking 52270 Mic-Pre/EQ and is built using the same Class A circuits. A single rotary encoder provides access to all parameter settings, leaving the faceplate uncluttered to provide easy-to-read EQ settings. All EQ settings are retained in volatile memory when the module is powered down. The new DakingPlus Stereo Compressor features remote control and recallable user presets, all accessible via Ethernet. The 2U rack unit also features dual monochrome LCD displays with LED backlighting to display the current compressor settings in an easy-to-read graphic representation of rotary knobs and pointers. The selected parameters are displayed onscreen in text form also, for easy reading of the control’s setting. The rotary encoder has a solid, sure feel and the virtual knobs respond quickly to user input. Metering is displayed on the LCD screens with six meters simultaneously showing the input, output and gain reduction of both channels. www.lasvegasproaudio.com. 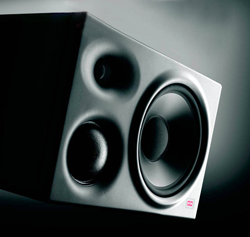 Klein + Hummel, the latest addition to the Sennheiser family of brands, introduced the O 300 triamplified three-way nearfield studio reference monitor. The O 300 delivers the same quality of the O 300 D, minus the digital input and control hardware, resulting in a cost-effective price without sonic compromise. By utilizing a dense, new, extremely low-resonance material called LRIM, Klein + Hummel was able to mold the waveguides required for optimal dispersion directly into the baffle. The elliptical shape of the high-frequency horn makes the dispersion angle in the vertical plane more narrow thus reducing the amount of early reflections off the console surface which would otherwise interfere with the direct sound from the speakers (comb-filter effects), thereby improving spatial definition. At the same time, the effective horizontal listening area is made wider, giving the recording engineer greater freedom of movement in front of the console. The use of LRIM has also made it possible to align the acoustic centers of the two drivers exactly on one plane, parallel to the baffle, thereby preventing time and phase coherency problems at the crossover frequencies. This allows the individual drivers to work together perfectly to produce a precisely detailed soundstage. The unit’s eight-inch cone woofer is made of a special lightweight polypropylene material that has excellent self-damping properties. The midrange is handled by a treated fabric dome with a three-inch voice coil. The one-inch high-frequency driver is equipped with a titanium/fabric dome that combines the transparency of a titanium dome with the low distortion of a fabric dome. All three drivers are magnetically shielded, permitting placement of the speakers directly next to video monitors or computers. MSRP: $2,495.00 per speaker. www.klein-hummel.com. 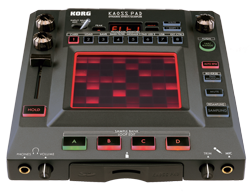 Korg announces the KP3 Dynamic Effect/Sampler, the latest addition to the KAOSS series. New effects, synth sounds, enhanced sampling, computer connectivity and SD data storage are complemented by detailed visual feedback from the new pad lighting system. Like all KAOSS Pads, the KP3 responds to the touch of a finger on its X/Y pad, for intuitive control over multiple parameters in real time. The Hold button locks the finger’s current position on the pad and Pad Motion memorizes and repeats any gesture played on the pad. The new pad lighting system — 64 individual LEDs in an eight by eight grid — can display the Pad Motion pattern as it plays, as well as many other visual cues. The KP3 features 128 effects programs containing new effects such as grain shifter, decimator, a vintage analog-style filter and expanded EQ. There are also drum grooves and unique vocoder and synth sounds derived from the Korg RADIAS. The KP3 can sample from a wide variety of sources via mic and line inputs. Four Sample Bank buttons (100 total banks) allow the user to create, play and save looped and one-shot samples on the fly. All samples are recorded using high resolution 24-bit converters and stored in 16-bit/48 kHz format. Samples can be saved on a Secure Digital (SD) card or transferred to computer via USB. The KP3 thinks in musical terms, allowing the sample length to be defined in terms of beats, not seconds. When sampling is finished, the sample will immediately start playing in sync with the sample source. As the sample plays, its start time can be fine-tuned further. Time-Slicing divides a sample into separate parts. The eight Program Memory buttons can turn individual slices on/off in real time, resulting in new rhythmic patterns. The KP3 can also sample its effects and even resample the entire output for powerful, multi-element sounds. USB computer connectivity allows for convenient data transfer to a computer. The included editor/librarian software also allows AIFF and WAV audio files to be loaded into the KP3 and includes sample-rate pitch correction. MSRP is $460.

Las Vegas Pro Audio, the U.S. distributor for SoundField (UK), introduced the new SoundField DSF-2 digital microphone system. The DSF-2 produces mono, stereo and digital surround sound, simultaneously if required, all from a single microphone. The SoundField DSF-2 solves the issues broadcasters struggle with in meeting the challenges of producing 5.1-compatible audio for high-definition transmission with a simple microphone system, one that does away with expensive multi-microphone arrays and complex recording techniques. All of SoundField’s systems comprise one of their range of processors and one of their patented multi-capsule microphones. The processors produce a four-channel proprietary output format known as ‘B-Format,’ which can then be further decoded by SoundField hardware or software into mono, stereo, stereo M/S, or surround sound in formats such as 5.1, 6.1, 7.1 - or any future surround standard. The precise format of audio generated by the microphone can be determined live - and changed if required - by adjusting the output controls on the associated SoundField processing hardware or software. And if the four-channel B-Format audio is recorded to a suitable multi-track storage medium, the decoding can even take place ‘after the event’ in post-production, with the precise nature of the final audio format not being determined until then. The B-Format thus has tremendous potential as a ‘future-proof’ archive format, as it will allow post-production decoding of archive recordings to other surround sound formats if these replace 5.1 in the future. The DSF-2 is the latest generation of SoundField technology, and the first to output its signals digitally. The 1U-rack DSF-2 controller unit offers live decoding to stereo, stereo M/S, and four-channel B-Format. The stereo signal may be output directly from the DSF-2 in the analogue or digital domain via rear-panel XLR and unbalanced 75‡ BNC connectors respectively, while the Stereo M/S and B-Format signals are available only as digital signals. From here, the B-Format signals may be decoded to a variety of surround formats by SoundField’s existing SP451 hardware processor, or by the company’s Surround Zone decoding software plug-in, now available for use with DAWs such as Digidesign Pro Tools, Steinberg Nuendo, and SADiE. Digital output is possible at 48, 96 and 192kHz for the best possible recording or broadcast quality. In addition to allowing the user to determine the eventual output format of the recorded audio, the DSF-2 system offers the user very accurate control over the apparent orientation, angle and pickup pattern of the microphone without the need to physically move the mic. Changes are easily made from the front panel of the DSF-2 controller. Again, while this might sound impossible, it’s all done quite simply by changing the way the multi-channel B-format signal is decoded. And all the user has to do is turn a couple of front-panel controls. Similarly, the apparent stereo width of the output audio is also precisely adjustable. www.soundfield.com.

A new site found at www.slynth.com provides more than 30,000 tracks of production music, sound effects and audio work-parts all-online. Slynth Audio Search enables any post-production team to preview and download audio files straight to their projects. They can also create and share project playlists with anyone across the country or throughout the world. The Slynth Audio Search already has garnered praise from the entertainment community. The site provides all of its Production Libraries (TunEdge, News Talk Sports Matrix, America, Production Matrix, Fish Tank, Spot Builder, D-Frag, SFX, TripQ and Latin Burn) in .wav and 320kb mp3 files. Constant additions and updates account for an average 500 tracks added each month. www.slynth.com.

Test Drive: The Orban DSP FX Engine For The DSE-7000

December 01, 1996 7608
by Jerry Vigil This month's Test Drive takes a look at a digital multi-effects processor, but this is not your typical effects unit. The DSP FX Engine does not come in a rack-mountable box, and it only works when plugged in to...
Read More...
© 1988 - 2023 Radio And Production, LLC
Go to Top