JV: How did you set the house up in the promos? Did you hint it was going to be this beautiful mansion or anything like that?
Ross: No, nothing. We let the listeners draw their own conclusions. We just said, “We’re giving away a house.” And if the audience wanted to make an assumption, well, that’s up to the audience. And the way we did it was very simple. We did dry voice promos that were of minimal copy, and the cue to call in and get registered for the draw was the sound of a doorbell. The promotion was huge. House prices around here have just hit an average of $500,000, so when you say you’re gonna give away a house, people get excited. But like I say, the Q has such a heritage of, “Here comes the punch line,” or “Here comes the catch,” that people were expecting it. People went along for the ride and people had fun, and that’s the key about our promotional philosophy: having fun. One of our rules is we always try to think of the radio user first and the contest player second. It always has to be entertaining for all the people who aren’t playing the contest.

One perennial favorite we have is called, “What’s in the van, man?” It’s essentially a bargain basement radio version of The Price is Right, where we travel around town with a vehicle, and contestants get the opportunity of choosing either what’s in the envelope or what’s in the van, and it could be several hundred dollars cash or a bag of manure. Or it could be one dollar in the cash envelope, and in the van is a home theater system… that kind of thing. You’ve got a 50/50 chance or getting it right or wrong. So there’s drama and there’s great fun and there’s audience participation. We trot that one out every year, and it’s hugely popular and often copied. The last time it was copied it became a little too close to home; one of our competing stations in Vancouver all of a sudden showed up with it, the exact same promotion, with the same name. 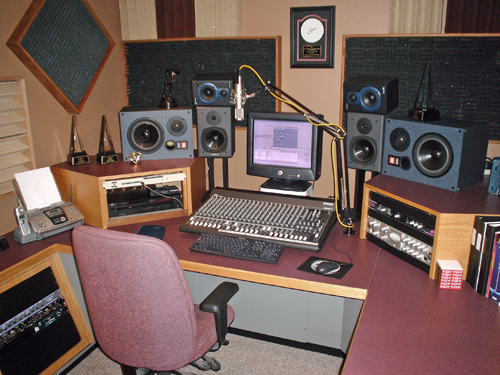 JV: You have a home studio you do some of the station work out of. Tell us about your studio and a little bit about the arrangement you have with the station.
Ross: Well, the studio evolved out of my freelance work growing, and it kind of necessitated itself, so that rather than me going back to the radio station every night and on the weekends to do my freelance work, I wanted to be able to spend time with my family. So the studio evolved into a very nice facility where I do most of the voice work for the Q, and I also voice about a dozen other radio stations. But I still like to do my actual production and mixing work for the Q at the Q.

It’s built around a Vegas PC. I like Vegas. I’ve been using Vegas since late 1999, and I’m now up to Vegas 6. We also use Vegas at the Q. There’s also a Pro Tools setup there, but I think it’s one of those situations where you get good and fast with a certain program, and it works just great, so why learn another one? I’ve already had to relearn production. I’ve been doing this for 25 years, so I started with mono reel-to-reels and razor blades. Vegas suits my needs very well. Also in my home room I have a few different mikes. I’ve got a Neumann TLM 103, an AKG solid tube, and an Audio Technica 4030. I have an Avalon Preamp that has a really nice sound, especially for doing voice-over. I saved my pennies for that one for quite awhile and was able to find a used one on eBay, but it’s been a worthwhile investment.

JV: How did you handle the acoustics?
Ross: It’s a combination of Sonex and fiberglass wedges, and I built a lot of frames using 1x3 cedar, and rather than gluing the Sonex or any of the sound treatment to the walls, they are friction fit into the frames and hung to the walls on 6-inch screws into the studs. Then I’ve got some base absorption in the corners and some panels mounted to the ceiling, as well.

October 01, 2011 6571
by Steve Cunningham No, this is not about world peace. It’s about DSP, because Dave Gamble has been writing DSP code for years, for companies including Focusrite, Sonalksis, and my current favorite specialty plug company,...
Read More...
© 1988 - 2022 Radio And Production, LLC
Go to Top