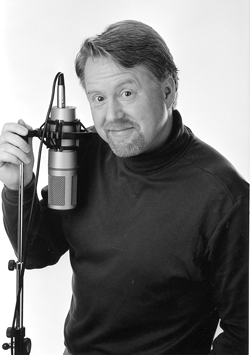 This month’s RAP Interview makes a return visit to Victoria, British Columbia, where we check in after 12 years with Ross McIntyre, Imaging Director at 100.3 The Q. The Q serves a market of just around 300,000, but there’s nothing “small market” about what you hear on the air. Ross, a 7-time RAP Award winner, is celebrating 20 years at The Q, where “local topicality” and self-deprecating humor are key elements in the imaging. If there is one station that best represents the definition and execution of “stationality”, it’s The Q. Ross gives us an up close look at the carefully and creatively implemented imaging at The Q and catches us up on some of the fun they’ve been having over the past decade. Be sure to check out the audio from Ross on this month’s RAP CD!

JV: How have things changed for you in these past 12 years?
Ross: Well, since we last spoke, the focus of the energy that I put into the station has changed. I switched hats from being the overall Creative Director and Production Manager about ten years ago to being the Imaging Director, and so I’m focusing my time and energy on voicing, producing, and writing the imaging and on-air promos for the Q. In addition to that, I’m doing a lot of voice work for other radio stations in Canada and the U.S. and television, as well. I don’t do any of the retail creative anymore. I’m aligned directly with the programming department doing strictly imaging and promotion as it relates to the programming department of the radio station.

JV: You hired a new person to do commercials I take it?
Ross: There was some movement from within. Doug Bidwell took over as Creative Director, and there were some other movements in the production department. Steve Shippanoski came in as the Production Director, and he has since moved on, and that position is currently held by Sheldon Hovde, our Retail Production Director. It’s a solid staff. There are three people in the retail creative writing department and the one producer, and then I take care of things on the Q side, as they relate to imaging and promos.

JV: Is there more than one radio station in the cluster there in Victoria?
Ross: Yeah. The Q has a sister station called the Zone, 91.3; it’s a modern rock station. The imaging for that is taken care of by Sheldon. He does the production and the writing for the imaging on that.

JV: One thing that stood out in our last chat was how the station’s personality and attitude was such a major part of the overall sound and the success of the station, and how you brought that through in the promos and the imaging was just amazing. Has much changed in this approach to the personality of the Q?
Ross: No. It’s still similar in the approach. The personality of the Q has remained true, probably for the most part because the core creative people are still driving that personality. Our approach might be a little less, you know, goofy than it was ten years ago, but it’s still fun. It’s still very self-deprecating, and it’s very topical locally.

JV: I was most impressed with the way you guys had mastered that art of coming off as the underdog station, with that humble attitude and using the self-deprecating humor. All the while, you’re kicking the competition’s butt! What are some fresh examples of how you use this approach to mold the station’s personality?
Ross: Well, we years ago decided that since we just didn’t have the budget to be big, we would try to be big by being small and try to win through humility, and we’ve continued in that path. We try to be local, we try to be topical. We look around at ways of tying the station into big topical local events or pop culture events. We try to look around the community and see what’s happening in the city — topics that have people talking, something that has been bungled locally that we can poke fun at or hitch a ride on so that we can essentially say to the audience, “Yeah, we live here, and what you see, we see,” or, “What drives you nuts drives us nuts.” To give you an example, we have a beautiful new arena which had its share of controversy when it was being built, and instead of doing the usual arena promotion of Seat Cushion Night, we did a spoof sweeper that talked about having “Install Your Own Seat Night.” Right around that time, we did a parody of “Macarena” called, “Hurry, Make Arena.”

JV: You’re not only being topical, but entertaining as well.
Ross: Oh, absolutely. We try to keep the imaging very entertaining as well as topical. We try to gauge it from what Conan and Letterman and Leno are talking about in their monologues. That’s a good way to gauge what’s current, obviously. But rather than being just plain mean, trying to skewer topical pop culture events, we’ll try to tie it into how it relates to the station. I’ll give you a couple of examples: when the Alec Baldwin controversy was going on, we did a liner saying that Alec Baldwin has as much of a chance of winning Parent of the Year as the Q has of winning Station of the Year. The Vancouver Canucks were in the playoffs, and everybody in Canada started jumping on the Canucks bandwagon. We did a series of liners that talked about the automotive modifications of that bandwagon, as if it was a real vehicle and had to undergo some structural modifications to handle the extra load.

September 01, 2003 12766
by Steve Cunningham There’s something just plain handy about a stand-alone CD burner — that is, one that’s not part of a computer. A self-contained CD recorder into which you can plug microphones, with input level controls and...
Read More...
© 1988 - 2023 Radio And Production, LLC
Go to Top