The AlphaTrack currently works with Adobe Audition 2.0, Pro Tools, Nuendo, Cubase, MultitrackStudio, Reaper, Reason, Final Cut Pro, Sonar 1.3, Tracktion, and Soundtrack Pro. Because it includes the well-understood HUI mode in addition to its own Native mode, AlphaTrack can be made to work with several other editors as well if you’re willing to do a bit of programming. While I am not willing to do that work, Frontier Design tends to be responsive to end users, and I suspect the list of compatible applications will continue to expand as more of these devices find their way into production rooms.

I tried AlphaTrack briefly with Sony’s Vegas and was able to get all the basic functions to work in HUI mode, but got stuck trying to program some of the more esoteric functions. So I chose to use Pro Tools as my test bed for this review, although I also exercised it extensively in Audition 2.0, where it is well-supported. 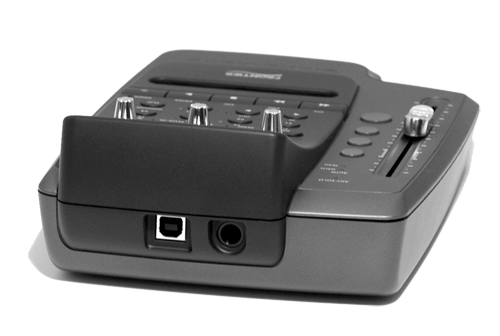 All that’s required to run AlphaTrack is a USB port, and either OSX 10.3.9 or greater on the Mac, and Windows 2000 or XP SP2 on the PC. Installation is simple, at least on the Macintosh, and only slightly more complicated on Windows. The package comes with a CD that contains version 1.1 driver installers for both Macs and Windows, although as always I recommend you check the Downloads section of Frontier’s website to ensure you get the latest and greatest. In addition to the drivers, you’ll also find plug-ins on that page for several audio applications. I grabbed the plug for Adobe Audition 2.0, which comes with a User Guide and a Layout PDF file specifically for Audition. Note that there is no Audition 1.5 plug available, and the Audition 2.0 plug will not work with version 1.5 or earlier.

Installing the driver is a snap. The Setup program will prompt you to disconnect the AlphaTrack from your computer, after which you just follow the prompts. It gives you the option to install plugs for Sonar, Cubase, Nuendo, or Reason, but I took a pass on those since I don’t use them. Installing the Audition plug was a bit more cumbersome, since you have to put the zipped .CV2 plug file inside the Audition 2.0 folder manually. When you plug in the AlpahTrack, Windows will alert you to the new USB device, install the WDM drivers, and prompt you to restart.

There’s no wall wart here and no power button, as the AlphaTrack gets all its power via USB. This is a good news/bad news story, with the good news being that it’s more portable and doesn’t add to desktop wire clutter. But USB ports have two limitations for most of us — one, they’re scarce, and two, USB can only provide a limited amount of power (the spec tops out at 500mA). My MacBook Pro handled all that quite well, with a Digidesign MBox hanging off one USB port and an unpowered USB hub hanging off the other, where three iLok software dongles and the AlphaTrack shared the love. Note however, that there is no room or power for a mouse, unless I plugged in the hub’s wall wart. On my ThinkPad things were worse — with only two seemingly underpowered USB ports available, the MBox consumed one while the dongles, the AlphaTrack, and a mouse had to share the other port. In that instance a powered hub became a necessity. Other USB troubles showed on my desktop machine, where the extra port on the keyboard could not power the AlphaTrack (remember, there’s a motor attached to that fader!). So while the AlphaTrack’s ability to run completely from USB is a blessing for laptop users, desktop users should figure in a powered USB hub or an extra USB card in a slot.

November 01, 1990 10029
by Jerry Vigil Look out! It's the invasion of the consumer DAT machines! Remember when you perused the catalogue of your favorite equipment distributor and drooled over the many DAT machines to choose from but cringed at the...
Read More...
© 1988 - 2022 Radio And Production, LLC
Go to Top