Scenes from a Mall 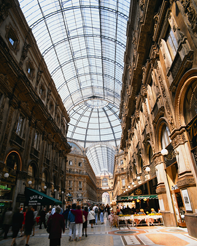 I’ll be the first to admit that I’m the perfect candidate for one of those TV makeover shows. No, not because I’m some clothes crazed fashionista keeping up with the latest trends, in fact it’s quite the opposite as I hate shopping. For me, shopping ranks right up there with catching the common cold. It’s something that’s not a great necessity in my life but still manages to happen to me a couple of times a year whether I want it to or not, no matter how hard I fight to prevent it.

I can’t even say that I hate taxes more than shopping. At least with taxes I usually get a nice tax return at the end... taxes paying me as opposed to me paying for shopping. I shop because I have to as there are holes in my shoes or in my jeans, not because I really want to. I can think of a dozen better ways to spend my time than walking through a mall shopping, let alone better ways to spend money. In spite of all this, I recently spent a gloomy weekday afternoon in a mall. By choice. OK, it was my daughter and her friend’s choice, but I still went along like a good parent.

While wandering somewhat aimlessly through the mall, dodging the shoppers who were attacking it with some sort of passion, it struck me. What differentiates one women’s wear store (just as an example) from the other 28 women’s wear stores? Yup, 28, I counted, I was there with my pre-teen daughter remember. Sure you can separate them by price points, or split out those targeting teens as opposed to older women, but really to me the differences were slight. Not that I’m in any target demographic for any of these stores, I was just wandering around the mall a little past the fountains. It was the same with the eight shoe stores. There were just shoes; the same shoes from store to store, in the same colors, at the same price points with the same sale discounts. They all had the women’s shoes on the left and the men’s shoes on the right. At first glance, the only differences were the lighting and color of the carpet.

These and many other stores in this city, selling the same merchandise, obviously manage to stay in business, sometimes in another mall, sometimes in separate stores, paying their staff, their suppliers, and their bills. How do these stores compare to our radio businesses?

Well, why we all don’t sell the same merchandise or format, with the amount of songs crossing from Country to AC, AC to Hot AC, Hot AC to Urban, Urban to CHR, CHR to Alternative, and Alternative to Rock, there is a portion that is similar from any one to another. Even the News and Talk stations are using recognizable music as talk-over beds and splitters. With clustering and voice-tracking, jocks are dividing their time between stations and formats. A large number of the spots are the same from station to station. If you were just walking down the radio dial like I was walking through the mall, without inside knowledge or a passion for a particular jock or format, the differences would be slight.

We as Producers are one of the few differences between any two stations on the dial. At least with market exclusivity the base elements won’t be the same from station to station, even though they might be the same city to city. That means at best we are franchisees in a chain store. Are you the kind of Producer that takes things apart to put them together so they fit your station and your customers, or are you just plugging in station voice over pre-produced liners all the time, looking to move on to something else? Everyone does at one time or another, but is it out of necessity or habit, temporarily or left until the format changes?

Do you listen to what the other stations in town sound like so you can purposely try to be different from the next guy, or is your window display the same as the store beside you even if you sell different merchandise? Do you listen to mentor stations on the Internet to see what they are doing and to compare (but not copy) to your station? You should spend a little time doing both on a regular basis, but know in your heart what you want your station to sound like. We can and should be the difference in our stations. We have to take pride in what we do and tailor it specifically for how it’s supposed to be used, or who it’s supposed to be used by. At the very least, to catch the attention of someone walking down the dial and window shopping as they go.

The analogy of a store in a mall applies to more than just the sound that comes out of the speakers. It applies to how we think about dealing with our clients as well. Do we pounce on them the minute they put a toe over the threshold, directing them to the merchandise that hasn’t sold yet and has to be cleared out, directing them to what we want to sell, or do we take the time to listen to them and attempt to offer solutions that will fit their business and their needs? I really hate it when some sales clerk pounces on me. If I need them, I’ll find them and ask my question. Coming up to me and asking “How are you today sir, my name is insert-name-here, is there anything I can do for you? Let me show you our newest …” is likely to have me leave or say “Maybe, if you’d let me get my other foot in the store first”, rather than consider that outstanding service and want to leave my hard earned dollars behind in the cash register. When a client comes to my studio, I want to listen to them, and propose ideas for their approval. I want to hear what they are trying to do and who they are trying to reach. If they know exactly what they want, it’s easy enough and then I’m just The Executioner, there to make things happen so the spots get to air as they want.

Our ultimate customers are our listeners, the same people who walk down the floors of the mall. Naturally we want to make them loyal repeat customers. How do they differentiate between the stations? Is it the same way they differentiate the 28 women’s wear stores in the mall? How can we make the differences easier to hear, to separate our store from the one just down the dial? It has to be done, or before you know it there’ll be a going out of business sale, and some other store will move into that space in the mall.

December 01, 1994 10963
by Jerry Vigil Just when you thought it was safe to buy that digital workstation you decided upon after months of shopping, Otari introduces the RADAR, Random Access Digital Audio Recorder. Here's a machine that will appeal to...
Read More...
© 1988 - 2023 Radio And Production, LLC
Go to Top