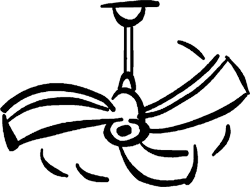 While on the phone the next day with a frustrated AE, she was lamenting the lack of respect between sales and the air staff. They rely on each other, but her sales manager keeps alienating the air staff with comments like “without us you wouldn’t have a job.” Then my daughters ceiling fan started spinning in my head - Cuh-thunk cuh-thunk cuh-thunk. I couldn’t help but think of the radio station as a ceiling fan.

When it’s aligned and well lubricated, the fan is working to be cool to as many listeners as possible, to generate revenue, to be a part of the community. And each of the four blades is instrumental and interdependent to the others in making the breeze, in moving listeners, in moving clients, with making one more revolution. In short, if one is missing, the fan wobbles out of control and will disintegrate, hurting people in the process.

Look at each blade as one of four essential components of the station: air staff/programming, sales, production, and engineering. The fifth element required, of course, is the motor/housing. That would be the office staff. More on them in moment.

But first, consider each of the four blades: We’ll start with engineering. These are the people who get and keep the studios running and the station on the air, allowing others to do their job. The engineering staff provides the megaphone through which the station’s programming is heard, allowing the other blades and fan housing to do their jobs and collect a paycheck.

One of the blades has to be the sales and promotion staff. Zig Ziglar claims there is nothing without sales. Ziglar’s declaration is incomplete. Without a product, sales is nothing (and it is already hard enough selling “air,” right?). So sales needs the air and programming staff to generate the audience, and the air and programming staff need sales to hit the street and handle rejection. Sales is a bitch. It takes a special breed, just as being on the air takes a unique talent. Yes, sales and programming are different personalities, but interdependent for a functioning station. The sales staff scratches and claws out in the “real world,” allowing the other blades and fan housing to do their jobs and collect a paycheck.

Production has to be another blade. While it may involve the air staff for voices, it also involves the sales department for copy points (sometimes even copy, but that’s another discussion for another day). Without production, the sales staff may sell all the time it can, but will never get a renewal as the results can never live up to the promise. Yes, each station needs a creative, compelling talent coach to craft relatable and motivational spots for local clients, and a production staff to dub the agency work for broadcast. (Plus monitor the order the spots play on air, schedule voices so they don’t represent competing advertisers, and so much more). That’s part of how the production staff allows the other blades and fan housing to do their respective jobs and collect a paycheck.

Notice none of these blades were labeled one, two; first, second, etc. The entire fan (station) is interdependent, and therefore no blade (department) is more important than any other. That’s worth repeating: Each department depends on the others, and none is superior.

That means we’re ready to look at what holds the station together and spinning in the same direction: the office staff. Without the office staff to create proposals, to answer the phone, the deposit the client’s checks, and to generate your paycheck, nobody will work for long. Period.

In fact, without any of these “ceiling fan” components, the station shuts down. No person or job is more important than any other. Not the Program Director or custodian, not the DOS or the board op. They all have responsibilities to keep the station moving together, and when one stops, eventually everyone stops. Including the office staff, because without the fan blades, the office staff would overheat as it spun in circles.

So if someone in the station demonstrates they think they are more important than anyone else, whether it’s someone from mornings or overnights, a new account exec or the twenty year veteran, or even the market manager; they need to make amends or find the door. I had a GM a long time ago that called it “stinkin’ thinkin’.” He showed the entire staff that positive morale and team spirit were required to be successful. Sure, personality conflicts happen, but work it out; you are all on the same team, responsible for each other’s success — and paycheck. Maybe it’s better to remember that before the pillow hits the fan, ‘cause once that blade is out of whack, once the “stinkin’ thinkin’” makes itself known, everyone’s job is much more difficult.

March 01, 2007 8438
By Steve Cunningham I’ve been using WaveLab once a week for years to edit half-hour radio shows and to master CDs, and lately it has been pressed into service to edit assorted podcasts. Since its introduction in 1996, Steinberg...
Read More...
© 1988 - 2023 Radio And Production, LLC
Go to Top