Q It Up: Do you use workstation templates?

Only 4 responses this month, but some great stuff. Thanks, guys!

Q It Up: Workstation Templates: In a recent Production 212 column, Dave Foxx described how he uses Pro Tools project templates to save time. If you use templates, regardless of your workstation, tell us about them. How many do you have and what are they used for? Take one of those templates and describe it in detail — number of tracks, what the tracks are for, effects and plugins on specific tracks, etc. Feel free to elaborate on the subject and give us your thoughts on using templates in radio production.

Mike Mlazgar [mmlazgar[at]sri.ca] Standard Radio, South Okanagan/Kootenays, British Columbia, Canada: I use Adobe Audition 1.5, which allows you to have a default template, that automatically sets the program up the way you like it when you’re creating a new session. My default session sets up to record two tracks in stereo on 1 & 2 (for recording music & SFX), and the rest get set up to record in mono (for vocals). I like to have my music & sound effects at the top of my session, and my VO on the following tracks. This gives me the opportunity to drop VO on other tracks to add effects, EQ, or just have update VO.

My default template also sets the master volume to -10db. I need to do this, because when I simultaneously record & playback, I have to use the cue bus on my mixer, and I can’t control the cue bus’s volume. So -10db on the master drops the playback to a level that doesn’t burst your ear drums and you can still hear the mics over it.

I don’t have any effects pre-set, since I find every session is different and requires different needs. I will create a special template if I’m doing something that might require it, like a batch of station IDs.

Ian Fish [Ian.Fish[at]chrysalis.com]: Heart, Birmingham, United Kingdom: My workstation: Pro Tools v7.1 HD3 TDM - Windows XP. I use a template for every single project I work on - and it’s always the same one. Cleverly called “Template”. I keep a copy of it on the audio drive with all the other Pro Tools projects so I can copy, paste and rename it in the correct drive quickly.

The template consists of 3 mono tracks, 3 stereo tracks, 3 Aux returns, and 2 master faders. The MONO TRACKS are identical, each with an ‘EQ’ rolling off anything over 300Hz, into a bypassed ‘DOUBLER’, a bypassed ‘METAFLANGER’ and finally an ‘L-1 ULTRAMAXIMIZER’. The bypassed FX Plug-ins can be turned on/off with track automation. Each MONO FADER then passes through an AUX SEND that goes to the third AUX RETURN and each fader outputs to BUS 1+2, renamed in Pro Tools I/O dialog as “VOX SEND.” The 3 STEREO TRACKS have no plug ins or AUX SENDS set up and simply output to BUS 3+4, renamed as MX-FX SEND.

The first MASTER FADER (Labelled O2R) has a ‘MASTER X’ plug-in as a finaliser, and feeds into the O2R mixing desk, at -18db to match the other analogue kit going into that mixer. The second MASTER FADER (labelled BOUNCE) has the same ‘MASTER X’ for level smoothing with the limiter set at -0.1dB, so it outputs at almost full digital level. When I’m bouncing a mix to .wav, I use the output of MASTER FADER 2 as the primary fader, so the wav is created at full level.

That’s it really. The main advantage I found with this setup is that all the faders, AUX’s and outputs are labelled sensibly (VOX SEND rather than BUS 1+2) making it an easy mixer to follow.

Blair Trosper [btrosper[at]jpc.com], News/Talk 1110 WBT, Charlotte, North Carolina: Normally, I’m too A.D.D. to remember to open my templates, but the one I do have set up is pretty basic and saves me LOTS of time. I always process our voice guy, Lonnie Perkins, the same way, so in Audition I have tracks one and two with his settings loaded. (Sometimes my non-destructive editing is hokey, so I have to overflow/overlap onto track two...again, A.D.D.)

Other than that, I have some effects stacks that I use for certain things — a set of notch EQ’s to bring out low-fi audio like phone calls, a processing EQ set to accentuate music, and so on. Audition and most DAW’s make recalling groups of effects very easy, and I have them on hand in my working templates.

Generally, in the template, I have all voice/phone elements bused one place, and the music and effects go to another place... this beats having to duck music elements individually. I find it’s a HUGE time saver to have these buses already in place to uniformly adjust a lot of elements with a single drag of the mouse.

Granted, I only use the ONE template, but it’s become a comfort thing... and a very easy way to think about things. It’s largely responsible for how fast I’m able to turn around certain kinds of promos! I’ve gotten to a point where I don’t have to really “think” about the mechanical assembly of elements. Since I know the voice guy is going to be consistent, the phone bits are going to punch through, and the music’s going to sound bright, I can worry more about the SOUND of the promo versus the TECHNICAL shaping of it. I love having the template setup because it permits me to jump right in. 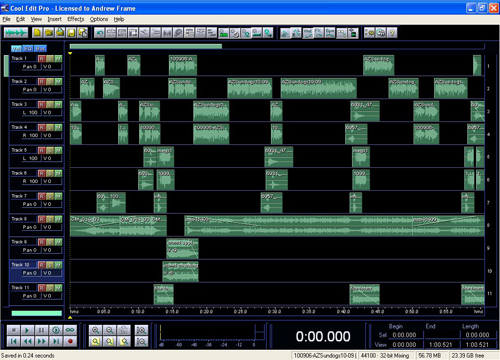 Andrew Frame [andrew[at]bafsound works.com], Brandi & Andrew Frame SoundWorks, Lehigh Acres, Florida: Our core editor is Cool Edit, so we don’t use templates as the ProTools folks would think of one, rather we have a set of general track assignments that allows us to pull up sessions from hours or years ago and pick up immediately.

When I was a ProTools user, we used templates to preset for commercial production or imaging production. (It’s going back to PT3, and I really don’t remember the details.) At the time I believe you couldn’t mix stereo and mono signals on the same track, so it was a: Track 1 V/O, Track 2 Pan Left, Track 3 Pan Right, Tracks 4-8 Stereo (for the music & fx).

Right now I’m working on a promo for the Arizona Sundogs, with multiple layers of stereo-wide on one set of vocals (see pic). Tracks 1,2, & 7-11 are all source-signal dependent, mono or stereo. Tracks 3 & 5 are hard panned left, tracks 4 & 6 are hard panned right. On regular spot production, I wouldn’t have the second hard panned pair.

Cool Edit allows layering of effects, so it’s not a big deal to put a filter and reverb on the same track. Often I will copy the region, put the fx on it, and drop that region into a dry track (“wet” audio on a “dry” track), so I don’t have to use a whole track just for one little clip.

I think templates are a great thing. It encourages consistency, without preventing you from breaking out of your template to do something different if the client wishes. It allows a faster setup, a predictable placement of your regions and effects, so coming back months (or years) later isn’t a hassle.

In a multi-producer setup, it allows another person to come in to a session partially done, and pick right up - or come in to a completed session that needs changes and be able to get right to work without figuring out the previous producers layout.

And anything that speeds up the process is a welcome benefit.