The system requirements have also changed. Audition 2.0 runs on Windows XP (Pro or Home) only. Service Pack 2 is recommended, though I have run it on a machine with SP1 only. For a processor, a Pentium 3 or 4, Centrino, AMD, or any SSE enabled processor is required, along with a minimum 512MB RAM. The first thing you notice upon installation is that an internet connection is required for activation of the software (there is also a method to activate via telephone). The EULA (End User Licensing Agreement) allows installation on two computers, so long as they are not in use at the same time, making it perfect to install on a desktop and a laptop. You can easily uninstall and transfer that installation to another computer at anytime, so long as it’s not active on more than two computers at once. 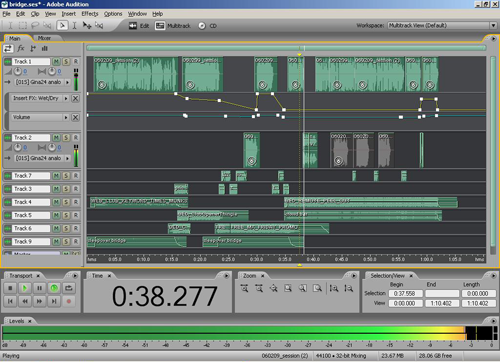 Upon opening the program, the first thing you see is the new GUI (graphic user interface), which looks strikingly similar at first blush, except for the new silver/grey color. The difference is that you can now save custom workspaces of all the dockable panels, either for personal preference, or for ease of use during specified tasks. Panels can be closed, or just hidden behind other panels to be recalled by clicking on a tab. However you want the layout to be, that’s what you can define, and come back to that layout at any time.

In the Multitrack window, perhaps the key change is a completely revamped and upgraded mixer panel. Not just scrubable numbers, but real-look knobs, and the channel layout expected of a hardware mixer, including input gain and phase reverse. There are individual meters and peak indicators per channel. Now all channels, busses, and the master bus all have effect racks with slots for up to 16 effects, with the effects rack selectable for pre or post fader. The old method of automation using “rubber band” envelopes has been retained, but improved. Rather than overlaying the waveforms, the envelopes are moved to adjacent automation lanes, with one lane per parameter, rather than trying to manipulate a multicolored spaghetti nest of envelopes. Yes, I did just say automation! It seems almost everything in Audition 2.0 can be automated. You also don’t need a hardware controller; you can write automation using the mouse on the new mixer faders in real time! These additional lanes do not come at the price of tracks either, as 2.0 allows an unlimited amount of tracks in the Multitrack window. The master lane of the Multitrack window has new global mute and solo buttons. You can use the new mixer to set inputs and record, so in reality you can do everything you’ll need just from the Multitrack screen. 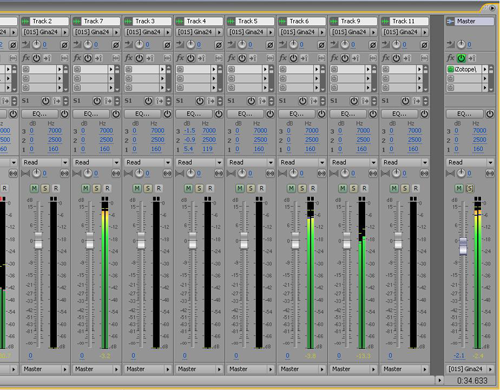 Recording in Multitrack is now direct to disk and non destructive. Files are saved and automatically named directly to disk as they are recorded, rather than held as temp files as previous. You first have to name the session you are working on before anything else happens. A session-recorded folder is created, and all files recorded into that session are automatically saved there, a minor change in workflow for increased security in case of computer or pilot error. CEP and Audition had very impressive disaster recovery features, but if you record in Multitrack it eliminates the potential disasters instantly. You also cannot record over a clip in multitrack. Multiple punch-ins on a track get saved as multiple files, so you’ll have to be sure that you select the correct one, and delete the others if they are not going to be needed.