Are You Ready For Video Production? 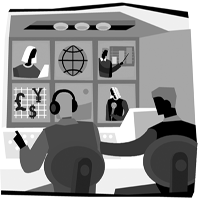 Being a Creative Services Director is AWESOME, I mean right down to the title itself—literally translating to “Guy in charge of making shit up.” It’s a whole job centered around coming up with creative new ways to say the same thing over and over and over. Freaking unbelievable.

“You mean, I could put the phrase ‘rock douche bags’ to a clever beat, and as long as I slip an ID in there, we’ll play it? Hell, yeah!” (Warning: Do not pull this if your station manager isn’t extremely open-minded to creative. Shout out Jim Fox!)

So now you know how I look at my job: Damned near seriously. If you can relate to that, then I’m almost positive you have the same kind of urges I do. No, not those — talk to your mother about those. I’m talking the need for something NEW. You read the best magazines, browse the hottest websites, watch the shows, see the movies. Your brain periscope’s always up, always looking for signs of that next big thing. Will it be a neat new style of production? A bed service? The Ultimate Promotion? All that “finger on the pulse” blahblahblah.

Well, I’ve got a new project for you: Video.

Though I’d yet to be in touch with our corporate Image department here at Entercom, I recently made some calls after coming across this program called Windows Movie Maker. It’s the really cheapo, super easy, consumer-ready movie editor on Windows.

At first, I was just goofing with it. It’s just like ProTools or any other digital audio editor I’ve seen: Works based on timeline; it is primarily drag and drop; is has a limited number of fun FX and plug-ins; and it uses subfolders for its video files. I’m lucky enough to have a digital camera that will film a little bit of video. With some shaky footage uploaded from this thing, and a few pictures I whipped up on Paintbrush (I put in many hours as a teenager), I’ll be damned if I didn’t make my first little movie! Crappy as it may have been….

Jump several months ahead and I, along with my partner in crime (shout out Matt Wheeler, KDND!), after consulting with as many IT guys and videoheads as we could find, have been granted funds by our GM (shout out John Geary!) to buy new equipment, programs, and upgrades. Now we can create in-house sales recap videos, cool stuff for the website and… other.

The first two are great and all (we’ve already made strides in both) but the OTHER is why I am addressing you right now. Ya ever heard the phrase “Viral Marketing” (echoes out)? It basically means getting people to pass propaganda about your station to each other like yellow fever.

Ya know those short goofy clips you get in your email box (i.e. Star Wars Kid)? Using my new tools, Adobe Premiere and Photo Shop, I created a couple of cartoons featuring our morning show (shout out Rob, Arnie & Dawn!). Each had their own “mass appeal.” A few of us sat down and picked the best, most “you gotta see this”-able of them all and then — via several outlets known only to me and my cat — this chosen one appeared very publicly in online places our audience visits. Lots of locals saw it, lots of nationals saw it. They saw the logo, heard the show’s audio, and before they could complain about any graphic images or crude humor… the thing was done. Whether you measure success by the stack of emails we received in response, or by the smart-moving and visionary internal support (second shout out John Geary! shout out David Lichtman!), we have achieved it.

I’m telling you, this video stuff has something to it, and we Imaging-types are just the peeps to manipulate it. Our stations can benefit and we can grow our value by bringing this “Next Thing” into our everyday thoughts. And since we’re already tuned into forward momentum, concise phrasing, and quick “in and out” entertainment, I think we can kick some ASS in this arena. It’s a lot like the big movie makers getting into television series creation. They bring something no one else does.

Next up, I’m gonna teach myself Flash. I’ll see ya in like a year!

August 01, 1993 21093
by Jerry Vigil Trying to find the right digital workstation these days is like trying to find the right breakfast cereal. There are fifteen bazillion brands to choose from, and they're all "exactly what you need." The vast...
Read More...
© 1988 - 2023 Radio And Production, LLC
Go to Top