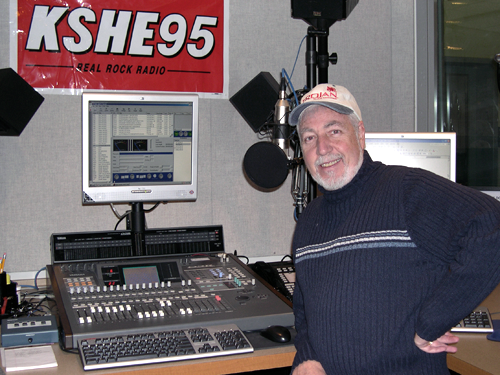 Emmis has had a long history of paying extra attention to its production departments and personnel. This is no better exemplified than at their 4-station cluster in St. Louis, where Ed Brown serves as their Director of Creative Services. We last visited with Ed way back in October of 1989 when he was the Creative Director for KSHE. He had already been on board for several years, and today Ed is one of the few that can boast tenure with one station of over 20 years. In this month’s RAP Interview, Ed catches us up with the past 15 years at the Emmis stations in St. Louis and offers some insights into the success they’ve had, amongst other areas, on the commercial side of things, where Ed’s creative talents are now focused almost exclusively. Be sure to check out Ed’s demo on this month’s RAP CD for a great sampling of his commercial work.

JV: Our last visit with you was in 1989, which was of course pre-consolidation. It’s unusual to find somebody who survived this era at one station, but also to find a station that hasn’t changed ownership in all that time.
Ed: Yes, KSHE was one of the first four stations that Emmis owned. They started in Indianapolis with WENS and then, I think, added Minneapolis after that, and then bought KSHE and what’s now Power in LA. Those were the first four stations in the Emmis cluster.

JV: What changes did consolidation bring to your situation there in St. Louis?
Ed: One of the things that happened was, of course, we lost a lot of close friends because we couldn’t keep everybody through that process. They were good people doing a great job. It was just a numbers thing, and I was fortunate in that regard that I was doing something that was still needed in the consolidation effort.

JV: How many stations in the Emmis St. Louis cluster today?
Ed: Today we have four, which are all in one facility here. We had five up until a few months ago when we sold off one, so we’re down to four stations now.

JV: KSHE is currently the number one rock station in town. I would imagine that’s probably been pretty consistent through the years.
Ed: Yeah, we’ve managed to stay on top in our area, and usually we’re number one with men 25-54 consistently. Every once in a while we slip. The beauty is what we did with consolidation. What it allowed us to do is build what we call a “rock wall.” We have the alternative station which takes everybody from, we say birth to 25 or 30 years old. Then we have KSHE which is more of a classic rock leaning station that does play some current material. That station will pick you up at 30 and take you up to say 49. And then we have K-Hits which is a classic hits station, and that’s a little bit mellower for the older rocker. That station picks you up at 45 and up. The music on that station is going to be for anybody who’s at least under 65.

JV: Back in ’89 you were the Creative Director for KSHE handing all the imaging and a good portion of the commercials. How have things changed?
Ed: Well, I altered the title a little bit to Director of Creative Services to more reflect what I do now because it’s a little broader with four stations and with me now doing the commercial side. Basically, I’ll pinch hit in imaging now, and I’ll help negotiate contracts for libraries, especially for KSHE. But I don’t do the imaging anymore. It seemed there were a lot more administrative duties once we got four stations. I found out I was spending more time trying to find things that fit different formats and that accommodated different people and keeping up with supplies and stuff like that. I’m talking to different syndicators and services out there plus dealing with the creative needs of the sales staffs for four stations – we have four separate sales staffs.

So, it took a lot of time to deal with all these things. Furthermore, I don’t know if Creative Director was a title that our corporate structure had in their official listing, so for budget coding purposes, I think Creative Services Director fit the bill better. It’s funny because I’ll talk to people at our other stations around the country, and everybody’s got a little bit different title, and they all mean something a little different, but we’re all doing the same job.

I oversee the commercial department completely and then get involved in whatever area is deemed necessary at the time, whether it’s budgetary or whatever for the imaging. But the image guys all work directly with their PDs. So really, their needs stem from the conversations they have with their PDs, and whenever possible, it’s much better for them to work that stuff out. Basically, at budget time I round up numbers. But even then, I go to those guys and talk about, “Well, what do you guys need? What do you want? Where are you going?” Because they know what they need. And then I focus on what we need from the commercial side to be able to do the best job we can do.

JV: How many people are handling the commercial production?
Ed: It takes three people on a daily basis. We have three full-time people. I have one person, Drew Johnson, who’s responsible for K-Hits and for our FM talk station. He does the commercial production for both of those stations. Then I have another guy, Jamie Lambert, who’s a young guy I just hired recently to do the commercial production for the Point. That’s what the Point needs. I sat down with the PD and it was decided when we first got the Point that they needed somebody who’s young, who’s in that lifestyle, someone who pops that music in their CD player on the way home from work and who likes to go see those bands and such. I love to do production for that station, but for me, when I do commercial production for that station it’s almost like I sit down and go, “OK. Now if I’m 25 years old, what do I want to do here? What kind of cool effects can I put on this or how edgy can I get with this copy?” But these other guys, they live it, they breathe it. They just think that way. So it was really important to get somebody and keep people in that position who understand the Point and its audience. I do the writing for the other three adult stations almost exclusively, and for the Point only if somebody brings something to me that needs some special attention. I also do all the stuff for our NTR Department and our Interactive Department.