JV: Are you doing some commercial VO work as well?
John: I get the occasional VO job, but I don’t solicit it, and that’s what you really need to do if you’re going to be big in that arena. I just found that I am active in so many other areas that that’s one thing that I used to do all the time when I was a Production Director, but I just don’t do too much anymore.

JV: How do you manage your time? Are you finding yourself unable to do a lot of things because of the many duties that you have?
John: Well, vacations are one of the things that I’m unable to do. I have to be a very careful time manager. Every day, I have to take a look at the list of priorities of things that have to happen that day, and in the next three days. The trap here is that you get so busy with immediate deadlines that you stop thinking long-range, and it’s critically important to reserve some time to think strategically about what you do, about where your career is headed, what opportunities are ahead that you want to position yourself for, what people you need to meet to build your network.

I can’t tell you at my age now how important making friends in the industry all this time has been, because I’m still tight with people that I’ve been working with now for 25 years. I don’t burn bridges because you never know when you need to cross back over. 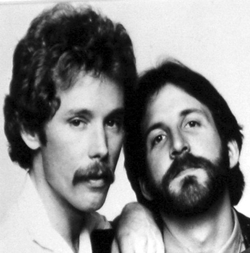 JV: You also have a CD of your own music. It’s interesting that you brought up earlier in the interview that you were a musician before you got into radio, and that’s something that you still have managed to keep alive. Even with everything else that you’re doing, you’ve cranked out a CD of original music. Tell us a little bit about this music venture.
John: I’ve been playing guitar since I was about seven years old. I’ve always been a musician. I spent my 20’s writing songs, playing guitar, playing in bands, making records, touring around the country. I played opening acts for so many names that you know from the ‘70s and ‘80s. But then, at age 30, I got into radio and had a wonderful time since then doing that. That’s been almost 25 years, but I have always been a musician, and never stopped doing that.

I had a very unusual year in 2004. My best friend is a fellow who I’ve known the longest in my life. He was the bass player in my band when I was in my 20’s. Richard Gates is his name. He plays bass for Paula Cole, for Patty Larkin, for Suzanne Vega. Well in 2004 Richard was diagnosed with a potentially fatal heart disease, and there was a time that we though he might die. And I thought to myself, “I have never made a CD with just Richard,” acting in the dual roles – he’s a good record producer, as well as a great bass player, kind of like a McCartney-level base player. So I went to him and said, “Do you have enough energy to do this project?” And he said, “I would love to do this project with you.” I said, “I’ll come up with a budget, and you just pick the tunes, you pick the side musicians, you pick the studio, you do everything that a producer normally does, and I’ll bankroll the thing. We’ll use my songs. I’ll sing and play acoustic guitar.”

It’s one of those things, if you knew you were going to be dead in nine months, what would you do different? And so, I just did that thinking that I don’t want Richie to slip away without us having this experience together. We did this record. It’s the first one I’ve made since 1980. I’m really proud of it. Richard, as I said, produced and played bass.

About six weeks after we finished the record, Richard went into the hospital and received a heart transplant, and now, a couple of years later, he’s doing wonderfully. He’s newly married, and the outcome has just filled me with joy.

JV: Great story.
John: I’ve got a second story to tack on to that. What are the chances of a guy’s two best friends both needing organ transplants? I figure next to none. But the other case involved my friend, Paul Yeskel. Paul is the President of AIM Strategies, which is one of the biggest classic rock record promotion companies in the industry. Paul was diagnosed with a potentially fatal kidney disease, and he and I are talking about this at the Conclave Conference, which is held every summer up in Minneapolis. Paul’s starting to freak out about this because his blood chemistry is starting to go south on him, and the doctors are saying, “You either need a transplant, or you need to go into dialysis here very shortly.” I said, “Paul, what’s your blood type?” He said, “A positive.” I said, “That’s my blood type. I should just give you one of my kidneys.”

And to make a very long story very short for your readers, that’s exactly what I did, about 15 months ago now. We went into the Robert Wood Johnson Hospital at Rutgers University in New Jersey, and they took my left kidney out of me and they installed it into him, and so now between us, we’ve got only two. We call his “Billy the Kidney.” Every time we’re out together, people say, “Oh, how are you doing? How do you feel?” He’s doing fine; I have felt fine since a couple of months after the operation. It took me about a couple of months to recuperate. It’s a pretty intensive operation, but after a couple of months, you don’t even know that you’re only working with one kidney, because your body really only needs one. It’s the only place where God over designed the instrument.

All of these things happened all in one year. As I said, a big year – 2004. I came out with a record, my best friend got a heart transplant, I gave my kidney to my other best friend.

JV: Over the past ten years, as you’ve bounced around the country looking at the different radio stations and kind of getting a sense of the production departments, how have you seen radio production evolve, and do you have an idea of where it’s headed?
John: Well, certainly consolidation has meant that more stations are under the control of fewer people, and the reductions in cost meant that now one Production Director has multiple stations to take care of. And so we have to, as a result, learn how to work smarter, because there’s only so much time in the day, and we literally can’t work harder. Figuring out priorities and rearranging priorities on a daily basis is a key skill for a Production Director today.

The other thing I’ve noticed, and maybe this is just my perspective, but I’m getting more and more fond of reality. Every time I hear a promo that’s nothing but bangs and whizzes and funny voices and EQ and stuff like that, I don’t react to it in the same way that I used to. It’s almost like my imagination says, “Been there, done that too many times.” I am much more apt to react to the quality of a human voice and the character of the emotion expressed in that voice, and the words.

Now, I think we’ve come back full circle to the message. So if I had to say what’s the single most important skill a radio Production Director can have today? It isn’t a big sound effect library. It isn’t a great big bass voice. It’s can you write well, and can you emote what you write on the radio?

June 01, 2006 10529
by Steve Cunningham When it comes to control surfaces, particularly ones that work with Pro Tools, I admit to being spoiled. I have access to most everything that Digidesign makes through USC, including the budget-busting Pro...
Read More...
© 1988 - 2022 Radio And Production, LLC
Go to Top