JV: It’s a Pro Tools studio there as you mentioned a moment ago. Has that been the case since the conversion to digital?
Brian: I was actually one of the first guys in the country to get Pro Tools. I remember actually being at Mike and Bob Lee’s house visiting them in, I think it was 1991. They had Sound Designer from Digidesign, which was their two-channel editor. They were like a developmental partner for them, like a beta tester almost. He said, “Yeah, you should wait because they’re coming out with a multi-track version of Sound Designer.” So I waited, and we ended up buying Pro Tools, which at that time was very difficult to use. The plug-ins didn’t exist for it. It was two separate programs. If you wanted to record something, you had to launch a separate program. If you wanted to then edit it, you had to save and quit out of that program and open up the next. It was really hard to use, but we stuck with it.

We’ve purchased thousands of dollars worth of equipment over the years. Our first Pro Tools system cost about $45,000-$50,000. We had one gig hard drives that cost $5,000 apiece. Now you can get 300 gigs for $200 in a case. So I’ve been with the product since day one. In fact, some guys from Digidesign came here within those first few months just to say thanks for buying the Pro Tools system for a radio station. I think there was a station in Philadelphia, maybe one in L.A., and then us. 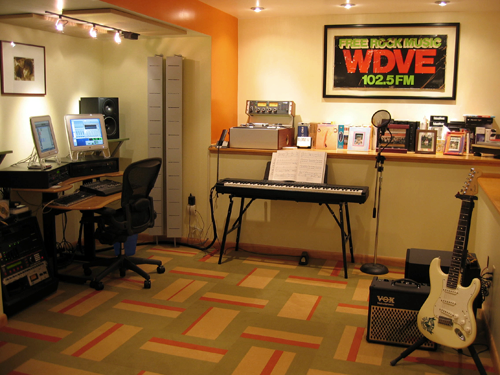 JV: Do you have a studio at home as well?
Brian: Yes. It’s a 24-Mix system with three Legacy farms in it and a couple of interfaces. It’s an older system, and I need to upgrade to an HD probably next year. The 24-Mix system has been in my house for about three years. Before that I had an 001, and before that I had an Audiomedia 3 card. So I’ve had a little setup in some way, shape or form at home for about 6 years. But the 24-Mix system kind of changed everything. Finally I could work at home, and it was just like working here at ‘DVE, with no limitations.

JV: Did you take a lot of work from the station home?
Brian: Yeah, I did a lot of back and forth work, and I still do to this day. It’s nice to have that interchangeability. Right here at work I have the same system. It’s a complete mirror of it.

JV: Were you also doing some freelancing out of the home studio?
Brian: Well, I first started putting a studio together because when I got married and my wife was pregnant, I determined that staying late at work just wasn’t going to be something that I could do any more. And I did start getting some clients. That was starting back in the mid-90s through almost the late 90s. Times were great for an independent producer to make some extra money. Stations just believed in hiring outside guys. They set aside a few hundred bucks a month to maybe do a couple of promos or some sweepers, whatever. I had a ton of clients. At one point I had stations in New York and Miami. I used to do stuff for KUFO in Portland. That was also at a time when we were owned by Frank Wood/Secret Communications, the small boutique company I was talking about earlier. You didn’t have to worry about competing against your own company back then; we just didn’t have very many stations. Once everybody started getting gobbled up and you’re down to like two giant companies now and then a few others, it’s very difficult for me to get a call from another market and not be competing against another Clear Channel station in that market, which is kind of a no-no. Not to mention, larger companies have also decided they need to save money. They’d rather hire another production guy. Get somebody started in the business and have him do that extra work you need done instead of paying $5,000-10,000 a year to various freelancers. So the business kind of dried up for me around 2000-2001, just as I bought a new computer and everything. Then I started doing stuff for Premier. I started doing the Classic Rock Plug & Play Imaging Service, and that’s kind of been a resurgence for my home studio. They’ve helped finance the construction of it and all the equipment upgrades that I’ve done. I pretty much dump all the money that I make right back into that. I’ve been doing that for about three years now.