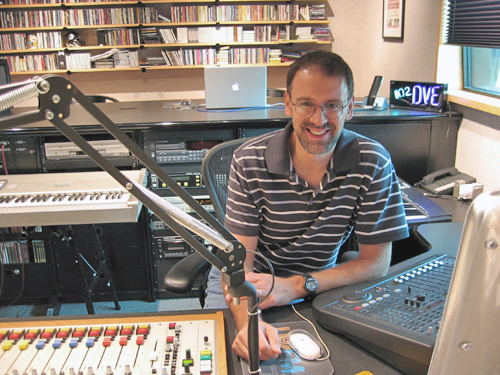 You can’t talk about monster, heritage rock stations without talking about WDVE in Pittsburgh. Clear Channel’s pride and joy in Steel Town continues to dominate, and this month we visit with Brian Price who has been imaging the station for the past 14 years. It’s another story of a dream job and one of those guys who’s a “veteran” in the biz, even though he’s only worked at one station his entire career. Brian gives us the inside scoop on imaging ‘DVE and we chat a little about his latest venture, Category Five Sound, his new imaging library company. Be sure to check out Brian’s imaging demo on this month’s RAP CD!

JV: How you got into the business?
Brian: Well, I was pretty fortunate. I started out in college at West Virginia University in Morgantown, and we had a college radio station that had a tremendous amount of structure to it. So it wasn’t the college radio that most people think of where people just kind of do whatever they want, show up with their own record collection, and have their buddies on the air with them. It was run like a real radio station. So the four years I put in there was truly like working four years at a small-market radio station. And while I was there, I interned at two places. One was a post-production house for West Virginia University called Radio & Television Services, which ultimately hired me out of college. I was the radio producer for WVU. I did a lot of image building for the university, a lot of interviews with deans talking about how great the agricultural school was or what the engineering department was up to. These sorts of things would air usually during halftime at basketball games or football games for WVU and that sort of thing. I would also do audio support for video. After about three or four months of working there, I got a job at ‘DVE as a part-time jock. Prior to this, while I was still in college, the second internship I did my senior year was in production at ‘DVE, so they knew me already.

When I showed up at ‘DVE, I fully intended to be a jock; I thought that’s what I wanted to do. And after about three days in the production room, I realized that every day you played Led Zeppelin and Deep Purple and John Mellencamp, and it’s almost the same songs every day; and in production you can really do a lot of different things. So it took literally three days for me to change my mind. My predecessor at ‘DVE, a guy named Tom Koetting, was also from our college radio station. He had been at ‘DVE for about five years. So U92, my college radio station, has kind of controlled the production at ‘DVE now for about 20 years. It’s a great station. I kind of owe it to that launching pad for getting such a great start at an early age.

So for about a year I worked two jobs out of college. The first was the full-time job at the post-production house, and then I worked part-time at ‘DVE. I drove about 75 miles from Morgantown to Pittsburgh each way. I did that for about a year, and then Tom left. He moved on to KBCO in Boulder, and that left me in a position to get the Production Director’s job. I was 23 years old at the time. It was kinda funny because when I talked to people like Joe Kelly, who was our voice guy at the time, and Spike Lee at Brown Bag Productions, who we bought our stingers from, they would say, “Where did you work before?” expecting this ten-year trek. “Well, I got out of college, worked here part-time for a year, and now I’m here.” I was very lucky. I’m from this general area and always wanted to work at ‘DVE, so that’s another reason. I had a tremendous focus on getting here and making sure I stayed in this area.

JV: Sounds like it was your dream job from day one.
Brian: Absolutely. And it has remained that to this day, which is rare. It was rare back then and it’s even more rare now.

JV: WDVE was a rocker back then. Has it been a rocker all this time?
Brian: Absolutely. It’s been on the air about 36 years now, and that’s the beauty, it’s never changed. It’s a true heritage rock station that has no blemish on its record. It doesn’t do like ‘MMS did back in the ‘80s — Top 40 for a while then something else for a while. We’ve never really been all over the map. We’ve stayed the course, and that’s why we have bonded so closely with the people in Pittsburgh. When you drive through Pittsburgh seeing ‘DVE bumper stickers, T-shirts and billboards, it’s like driving through any other city and seeing Coca Cola ads. In fact, just last night we had a little ceremony. We are in a building at the top of a hill near one of the three most traveled areas in Pittsburgh. It’s like the main drag to go into the city from the airport. We’re at the top of this hill in this eight-story bright gold building; it looks like a flashcube. And after many years spent trying to make this happen, we now finally have our call letters on the side of that building at the very top, so it looks like the ‘DVE Building. We lit the sign last night and had a little ceremony. It’s great because we’re at the top of this hill, and people will sit in traffic sometimes for an hour on this hill. It’s the ultimate billboard. I’ve got video of it. It will be on our website in a couple of days.

October 01, 2011 6355
by Steve Cunningham No, this is not about world peace. It’s about DSP, because Dave Gamble has been writing DSP code for years, for companies including Focusrite, Sonalksis, and my current favorite specialty plug company,...
Read More...
© 1988 - 2022 Radio And Production, LLC
Go to Top