From the northwest of Russia, about 800 miles due east of Moscow, sits the Republic of Komi, home to Aleksey Vaneev and his Voxengo Pro Audio Software company. I’ve noticed that the Voxengo line of plug-ins is quite popular with radio pros, so this month we’ll take a look at a couple that are of particular interest to production, Pristine Space and Voxformer.

Aleksey Vaneev is a busy guy, as evidenced by the thirty-five plugs in the Voxengo range (fully thirteen of them are free). His VST-format plugs run the gamut from compressors and EQs to more esoteric fare like phasers, tube simulators, noise reduction and even sample rate converters. The most expensive of the lot is the Pristine Space reverb (see below), which weighs in at $139. Most plugs are in the $50 to $70 area, and they’re better than those prices indicate. Gotta like that. 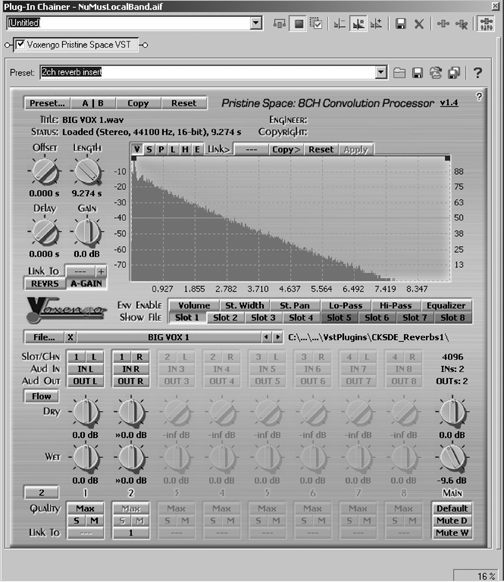 Good convolution reverbs are now available at much lower prices than was the case just a year or so ago. Voxengo’s Pristine Space is one of these, and carries a price of $139.95 for the full version. The company also offers a Light version with a price of only $59.95, which is really a huge bargain considering the only difference is that the full version can generate eight channels of reverb, while the Light version is stereo only.

In my review of the Waves IR-1 Convolution Reverb (RAP March 2004), I explained a bit about convolution and the use of “impulse responses” that capture the properties of a real reverberant space, so you might check that out if you need background information on the process. In addition to convolution and support for eight channels, Pristine Space also includes comprehensive routing options for those eight channels, “low quality” and “zero latency” modes that use less CPU resources, a large number of impulse files that are available as free downloads, some non-destructive editing of impulse files, and a browser-based help file. You can get a fully working demo as a 1MB download from the Voxengo web site and check it out on your own system. The only restriction is that it cuts out briefly every 25 seconds. If you decide to buy it, Voxengo will send you a registration number to unlock the full version.