Q It Up: What mics do you use?

Q It Up: What mic do you use for your commercial and/or imaging production? What are your likes and dislikes about the mic? If you had your choice of ANY mic, what would you choose and why? Feel free to add any other related comments.

Rob Frazier [robnokshus[at]yahoo .com]: There are three different mics in my studio and I use all 3 for various things. At the operator position, the mic that I use all the time for my voice is a Neumann TLM 103. Nice, warm and versatile, it’s about 2-years old — a great mic for about a third of the cost of a U87, which is what resides at the guest-2 position. This is the mic that I record everyone else on. Great mic. At the guest-3 position is a good ol’ RE-20. Since the RE-20 is the mic we use on air, every studio here is equipped with at least one, though I rarely use it.

All 3 mics run through Eureka mic processors. I spent a good 2-weeks once we moved into our new studios tweaking the settings on the TLM-103 until I was satisfied with the sound. The other 2 mics use the settings set by our Chief Engineer, Lynn Duke. 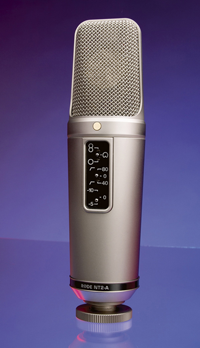 John Pallarino [JPallarino[at]entercom .com], Entercom, Greenville, South Carolina: We currently have five production rooms using the traditional Electro Voice RE20 with a Symetrix 528E processor. Our main production room where most of the commercials are produced and voiced has a RODE NT1000 condenser mic which has temporally replaced the Marshall MXL2003. There are also four EV RE20’s in the room as well for interviews and shows.

The Electro voice mics are great for broadcast but too flat for commercial production. They have no presence and don’t carry the low end very well. The RODE is great for VO and really captures the high and low end well. But for the money, I would have to say that the Marshall MXL 2003 is my favorite. It’s been said to be a Neuman knockoff at fraction of the cost (about $150!) Try it, you’ll see!

My choice of mic would of course be a Neuman U87, combined with a Sennheiser MKH416. Both mics have a unique sound to them that can really capture some great VO. One of our voice guys (Brian Lee) uses the Sennheiser for all of his work and it really has a nice mid range crisp sound to it that works great with his voice but may not work well others. Mics can be tricky, so I think that’s why most engineers stick with the beloved EV RE20 when setting up a studio.

CJ Goodearl [cj[at]realrock1011.com, www.cjgoodearl.com], Clear Channel, Orlando, Florida: For comedy bits, I use the mainstays: station-owned EV RE-20 or RE-27. Like the proximity effect, low distortion, decent midrange. Don’t like the lack of sensitivity — not great on some female voiceovers, tends to turn some jocks into “pukers,” that is, they may feel they have to project more. For promos/commercial work, I own an AKG 414, and LOVE IT. Like the price, (bought it for a song from Jeff Laurence, thanks Jeff!) — also, built very solid. Dropped it last week and almost had a stroke until I realized there was no apparent damage. No dislikes really. (Well, OK, the gold grill may be a little too much “bling!”) Recently bought a Rode NT-1. What a bargain! Sounds almost as good as the AKG — not quite as much top end, but great overall. Only criticism is no polar pattern switches or pad, but I still love it. Looks like a Neumann U87 if I turn the dimmer switch down low enough. Let’s see... if I could use any mic, I’d probably go for whatever Chris Corley uses! Fantasy mic would be a Neumann U87, vintage Telefunken, or maybe one of the Manley models. That reminds me, I have to play the Lotto this week.

John Mangan [John.Mangan[at]cptc .edu], KVTI Radio, Tacoma, Washington: I’m afraid we’re not very exciting when it come to microphones. All the studio mics are EV RE-20’s (time-tested, tough and clean). When we need something more directional, we have some RE-16’s. And 635A’s for out on the street. We also have a small but pristine collection of old (working) RCA ribbon mics that are too fragile for everyday use (77DX, 74B, BK-11A).

Jason Skaggs [zackl[at]zrgmail.com], Zimmer Creative Services, Joplin, Missouri: We built new production rooms here in Joplin about 2 years ago — the walls are angled, new B&W speakers, it’s awesome. When it comes to mikes, I choose Studio Projects C1. Let me tell ya, I’ve worked with a lot of mikes (and even a couple of guys named Mike). The C1 is the best prod mike so far. It looks good, it sounds even better. And the shocking part is, (whisper) “it’s dirt cheap.” You can get the Studio Projects C1 for around $200 to $300. I’d put it up against a $4000 Neumann any day, for everyday prod work.