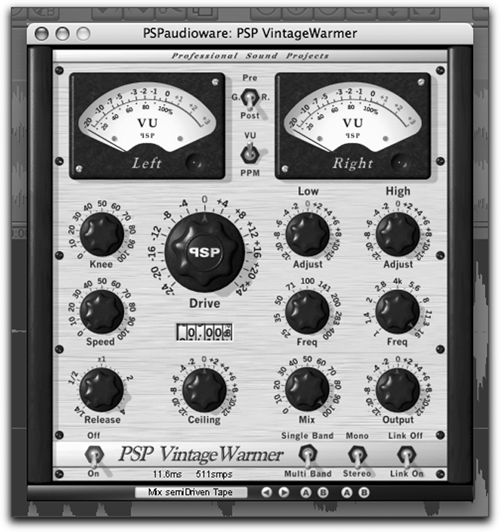 VintageWarmer is a plug-in emulation of an analog single- or multi-band compressor. PSP effectively captures the analog vibe with an attractive front panel that incorporates retro VU meters. The large Drive control with a range of ±24 dB sets the input level to the limiter, while Knee adjusts from a hard turnover suitable for limiting, through tape-saturation characteristics, all the way to soft-knee compression. The Ceiling knob lets you adjust just the peak output level. Speed adjusts both attack and release times simultaneously (its name refers to tape speed), while you can shorten or lengthen the release separately using the Release control.

Mix and Output are self-explanatory, and again the fake Power switch acts as a bypass. I often found myself setting the Output to match the input, and then using Bypass to hear exactly how VintageWarmer was “enhancing” my tracks. The twin VU meters can display either pre-EQ level, gain reduction, or output levels for the left and right channels, with needle ballistics that simulate either a hardware VU or a PPM meter. Included are overload LEDs, which count the number of consecutive samples at 0 dB and light up on a count of three (this default can be adjusted on the rear panel). Once lit, the LEDs slowly fade but remain a dark red until you click on them to reset them.

The key to understanding VintageWarmer lies in its two operating modes: single-band and multi-band. In single-band mode, the entire signal is first passed through high- and low-shelving filters and then compressed. That is typically the mode you’ll use for recording and is the mode employed in the factory tracking presets (the last 12 of 29) supplied with VintageWarmer. In multi-band mode, the signal is first split by parallel low-, medium-, and high-band filters, each containing its own compressor. The mixed output is then passed through a hard-knee limiter. You’ll generally use multi-band mode for mixing and finalizing, and it’s in use in the first 17 presets. 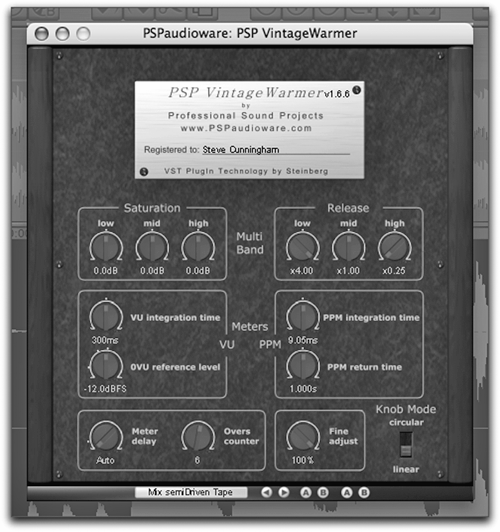 VintageWarmer offers a complete set of front-panel controls for managing all EQ, compression, and limiting parameters. Some control functions change with the mode — for example, the High and Low Freq knobs set the shelving frequencies in single-band mode, but set the crossover frequencies in Multi-band mode. To reduce control-panel clutter, it has a back panel (accessed by clicking on the VintageWarmer logo on the front panel) with controls for functions that are used less frequently. In a nice touch, the Fine Adjust control can be used to restrict the ranges of critical front-panel controls down to 12.5 percent of normal. Range reduction is especially useful for tweaking the factory presets without destroying their intended function. Back-panel settings are saved with presets, but the factory presets all have Fine Adjust set to 100 percent, so flip around back before tweaking them.

VintageWarmer is effective and easy to use. I was always able to find a factory preset that came close to the sound I was reaching for, and was simple enough to tweak the rest of the way. The manual is clear and covers all the functions, although you won’t find any extended EQ and compression tutorials there. But I’ve quickly became addicted to VintageWarmer for getting additional punch and “texture” on VO tracks, especially for promo work. Well worth a tryout, so go download the demo and give it a whirl.

The Lexicon PCM 42 was a pre-DSP digital delay line that was introduced in 1981. Its audio delay was digital, but everything else about it was analog. It had primitive clock-sync functions that made it a favorite among loop performers. Sweep effects were provided by a time-base modulation section with an envelope follower and a low-frequency oscillator that generates sine or square waves. A Delay X2 button cuts the sample rate in half, doubling the delay time (and the grunge factor). Most importantly, the PCM 42 had a characteristic sound that made it a standard. I bought mine cheap in 1988 from a studio that was going out of business, and still use it regularly.

So how does the emulation compare with the original Lexicon PCM 42? Never mind the fact that you can have a PSP 42 on every insert of every channel of your mixer, it has preset memories, plus automation, and a snazzy photo-realistic front panel. Moreover, the controls and indicators on the plug-in generally act the same way they do on the original.

Not everything on PSP 42 works exactly as it did on the original. On the original PCM 42, hitting the infinite-repeat button immediately locked whatever was in the entire memory. Infinite repeat in PSP 42 has more in common with a modern phrase sampler, initiating a one-shot capture at the current delay setting.

The Clock mode also works differently. The PSP 42 locks to any tempo provided by your host application, or you can set the tempo from the front panel. Up and down buttons set the note value (16th, eighth, quarter, and so on) and the number of note units. It also does a very nice emulation of clock sweep, something that most software-based audio delays don’t handle well. It also does a very satisfying octave shift when you hit the Delay X2 button.

But what about the sound? The PCM 42 is a classic because it sounded good — not transparent, but with a nice round and slightly dark tone. The PSP 42 holds its own, exploiting PSP’s tape saturation emulation to achieve a sound that is pleasant and warm. It’s certainly close enough to the original for gummint work, and in fact provides an organic-sounding alternative to the stock delays provided with most software editors. Go get the demo — I think you’ll like it.

Cool-sounding plug-ins coming out of Poland? Who knew? Seriously, the PSP plugs are worth a listen. They’re particularly attractive at Group Buy pricing, which is how I ended up with mine (see sidebar on next page). But check ‘em out for yourself.

PSPaudioware’s Nitro, Vintage-Warmer, and PSP 42 carry a retail price of $149 each, and are all available for purchase and download at the company’s website. For more information worldwide, visit www.pspaudioware.com.

March 01, 2000 37711
There’s an old saying about choosing the right tool for the job, and that’s as true in the production room as anywhere else. We’re all doing more production work on tighter schedules than ever before, and our equipment has to be...
Read More...
© 1988 - 2022 Radio And Production, LLC
Go to Top