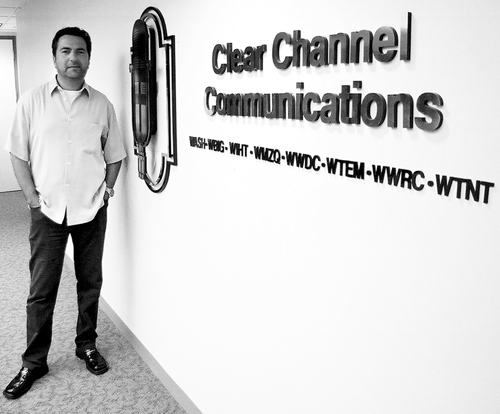 When you’re truly passionate about this business, it seems there’s no limit to what you can do. Yaman Coskun is a prime example. Bitten with the passion at age nine using a walkie-talkie as a “radio” transmitter, Yaman was “on the air.” His passion has fueled him through an illustrious career in radio including several successful years on the ad agency/prod house side of things. But it is radio that has most recently called him back as Clear Channel’s  Creative Director of Sales for their Washington D.C./Baltimore cluster. Yaman shares highlights of his 20+ year career and focuses on his role with Clear Channel’s Creative Services Group and “Less Is More.” Be sure to check out Yaman’s demo on this month’s RAP CD! 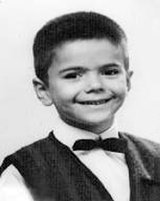 JV: When and how did you start in this business?
Yaman: Well, we’re going to go way back, because the true start was when I was nine years old broadcasting live with a pair of walkie-talkies to my best friend’s house next door. By the time I was 15, my fascination with the radio evolved into more of an obsession as I turned my bedroom into a pretend studio utilizing every piece of audio equipment I could get my hands on. In other words, my story is no different then any other passionate radio producer you have ever interviewed. We all got into radio because at some point in our lives, in most cases between the ages of seven and 17, we fell in love with this incredible medium.

My professional involvement began in 1983. Living in Philadelphia I often made the time to drive up north on the New Jersey Turnpike just to be able to receive my favorite radio signal from New York. It was 98.7 KISS. I was absolutely blown away by a guy named Shep Pettibone who used to do remixes on that station. He would take songs that had been in the power rotation and remix them, giving them extended life while giving the station an untouchable exclusivity. They called them “master mixes.” They use to have this cool sweeper; this sexy voice would come on and go, “98.7 KISS, the Master Mix.” I would be so fascinated by it and would go home and try to imitate the same concept using the highly impressive, but primitive pause button on my Radio Shack Realistic cassette player.

Then one morning, scanning across my Philly FM dial, I hear this brand new station come on the air in Philly called KISS 99 FM. It later become Power 99 FM, a hot, sexy, fresh CHR station in Philly sounding very much like KISS 98.7 in New York. I’m like, “Great, now I can save gas because I don’t have to drive on the New Jersey turnpike to listen to them; we have our own!” For me it was just pure ecstasy and an opportunity to possibly become the Shep Pettibone of Philly.

Thanks to an extremely cool and open minded, hot, young, new, energetic PD who was running Power 99 FM, his name was Jeff Wyatt, this ambition of mine led Wyatt, who was familiar with what Shep Pettibone was doing in New York, to giving me my first shot at bringing about what became quite a hit in the ‘80s in Philly, “Yaman Supermixes.” Of course that’s when I came face-to-face with two new partners who would be with me for years to come replacing my Radio Shack pause button, and that’s Mr. Razorblade and Mrs. Splice Tape.

JV: At this point, you were just freelancing these mix shows for them?
Yaman: In the beginning yes, but then subsequent to me making a name for myself through these Yaman Supermix shows, I started doing club gigs for the radio station as a DJ and as a semi-personality — because I wasn’t an on-air personality. I was constantly told, “You can’t go on the air because you have an accent.” Unless you had a Hispanic accent, a foreign accent was not a thing that anybody could find a benefit in to put you on the air. I was the off-air personality making club appearances as the Supermixer. And that’s how I started making a living through radio at the expense of repeatedly being yelled at by my father that I am absolutely wasting my time until the wee hours of the morning playing with razor blades and splice tapes in the studio of a radio station that, for me, will have no future, no money, and I should take up something that is more responsible and more of a career. This was an ongoing dispute between my dad and me.

JV: What happened next?
Yaman: From there I basically was able to hone my skills as a radio producer because starting out as a remixer, and actually spending that much time in the studio, allowed me to assist the production department with little projects, little commercials here, a piece of copy there. Then when Jeff Wyatt moved on to Los Angeles to become a golden child of the ‘80s as he became the VP of programming for Emmis on the West Coast, I stayed behind as the assistant production director without that title. I was basically a part-time guy who would help do some of the imaging for Power 99FM as well as assisting with the commercial production.

That went on for a few years until I decided to pack it up, move to LA, and pursue an acting career for about an hour, during which I got a phone call from an old buddy named Frank Cerami who was sitting in a hotel room outside of Philly carting up music for a brand new radio station that was about to go on the air in Philadelphia named Q102. He asked me if I would be interested in coming back to Philly and joining him to assist him, as he was appointed to be the Music Director for Q102. And the passion and the state of delirium that I entered at the age of nine while broadcasting to my neighbors house prompted me to say goodbye to LA and return to Philly. I joined Frank Cerami as the Assistant Music Director at Q102 where we launched Q102 in 1989 under the direction of Mark Driscoll and later Program Director Elvis Duran, both of whom I worked under in what I would say were some of the most colorful years of my radio career. 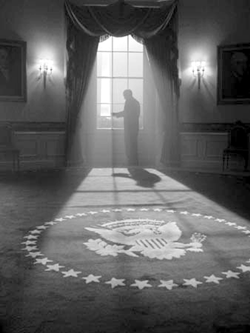 JV: What was your next stop?
Yaman: Well, let me just pause here and tell you that if you have not been fired from a radio station, you truly are not in the career of radio; you’re just kind of having fun and haven’t totally been christened so to speak. Frank and I were fired along with 15 other people from Q102. That led to the next phase in our lives, which was After Midnight Productions, our own production company which we ran from his basement. Our specialty, your favorite and mine, nightclubs and car dealerships. They are the local revenue machines, at least a big percentage of it. So we focused on that for a while, and After Midnight Productions, literally from the basement of Frank’s house, rocketed to the top of a high rise in downtown Philly, evolving into a company called SoundByte. SoundByte became a radio production powerhouse handling local, and some national accounts, via strategic partnerships with some of the agencies in Philadelphia. I became the Creative Director and Senior Editor for SoundByte working closely with Frank, and it was a very educational experience.

Of course, and one point in this whole story I am telling you, I did have to say goodbye to my partners Mr. Razorblade and Mrs. Splice Tape, leaving them for a new hot chick named Pro Tools. The transition from tape to digital was made somewhere around 1991. Frank Cerami is a man with great vision, and he was probably one of the first people in the country to recognize the transition was about to be made permanently. He invested in a digital workstation called Pro Tools. Of course I was like, “What is this thing? What does it do? Why do I have to make the change?” Because as you all know, everyone hates change.

I hated it in the beginning and I couldn’t believe that we just invested like 16 billion dollars, which at the time seemed like the price tag of this digital workstation. It turned out he was a brilliant man for recognizing that it was about to become the wave of the future. I became quite proficient on it, and it helped me a great deal in expressing our creativity in ways we could never imagine when working at SoundByte.

JV: You were obviously a producer from way back when you were doing the mixes. SoundByte was a commercial production house. At what point did you start getting into copywriting?
Yaman: Right away. Copywriting really started at the basement when we were doing After Midnight Productions. It was more conceptualizing for me, and then Frank would help me refine the copy and we would do it collectively. It was always a good 50/50 partnership. Copywriting became a pivotal part of my duties at SoundByte, although I must admit more than 50% of the time copy was provided by the agency with whom we would work on a particular project.

July 01, 2010 9299
By Jim Kipping Alas: A new beacon of light at the end of the production wind tunnel we force ourselves into every day. This article will change the way you will do work in your studio or on the road. Production folks,...
Read More...
© 1988 - 2023 Radio And Production, LLC
Go to Top