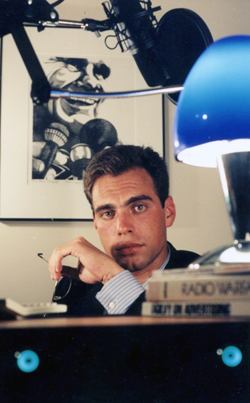 Franklin Raff, at thirty, is a Washington insider with some fifteen years in the radio business, spanning local and national sales, station management, production, and talk. He’s the founder of the unusual advertising/consultancy shop Raff Radio (www.raffradio.com), and though he’s a senior network producer – and G. Gordon Liddy’s right hand man – there’s nothing he likes better than a long night in the production studio. So either he’s doing something right, or he’s just plain nuts. RAP mag wanted the skinny. Be sure to check out a sampling of Franklin’s work on the RAP CD.

JV: When, where, and how did you get your start in the biz?
Franklin: Well I learned how to make coffee as an intern for WRQX in Washington DC, and Jack Diamond gave me a few golden nuggets of advice: Visualize your listener, driving alone. Life is supposed to be fun – be disciplined enough to keep it fun. Rinse the filter. At that time I could only get on the reel-to-reels in the middle of the night, and this was when it would take ten hours or more to do, what I thought was, a really startlingly good piece, so there was a lot of sleep deprivation and bloody fingers.

But there was a certain inevitability about radio for me. I was nuts about The Greaseman as a boy, wondering how he managed to incorporate all those wonderful sounds in such a seamless, centralized way. And I remember long winter nights in the eighties in Quebec. I’d be curled up in the top bunk of a boarding school dorm room after “lights out,” listening to local college radio. That was when I was first struck by the warmth, unlimitedness, and accessibility of the medium, and I wanted to create that magic. So I puked my way through early shows, imitating my heroes. Later, in college at WYBC – Yale Broadcasting, 94.3FM in what was market 96 – I made a number of decisions that, while eventually propelling our 3 kilowatt station to #1 12+ in the market, also destroyed what I most loved about college radio to begin with. So I do have some wonderful mentors – PDs, SMs, and GMs alike – but sometimes I feel I will always be atoning for early sins, and always just starting out. I think it’s that way for a lot of people who really love radio.

JV: You started an unusual business – Raff Radio – ten years or so ago. A “radiocentric” ad agency. This was about the time Roy Williams was firing up his famous shop. How did Raff Radio come about?
Franklin: At one point I worked for a duopoly that changed parent ownership three or four times in the space of a year, and when the talent started getting blown out here and there, I negotiated a commission and hit the streets to supplement my air income and secure my job. Well, I really liked sales, I enjoyed solving gross sales problems, writing copy, producing the spots; and I started to study the lives of Lasker, Ogilvy, Clow – the old ad greats. I was writing too many time orders for my competitors, and I was, in fact, pretty inspired by Roy Williams and did go out to Buda, TX to meet him.

To make a long story short, for the benefit of those interested in going it alone, I put a little client roster together, and with the blessing of my GM and SM, I left my talk show and sales job and started Raff Radio. My fellow reps were thrilled to get my list, and I was thrilled to keep serving my biggest clients. Radio is like a small business; it’s a good idea to know how to make and sell the widgets. Roy Williams has been a formative influence, although we’re not colleagues in any way, and I think Edwin Arlington Robinson was a bit of a hack. But along these lines, I now feel compelled to tell you, for the benefit of that one reader out there who is wide-eyed and just getting started in radio, that there is a myth of sorts about “who you know” in this business. It is true that a T&R rarely lands a gig, but neither does a recommendation, unless it’s nepotistic, in which case you don’t want to work with ‘em anyway. And job titles don’t mean beans. Your life in radio really is about the quality -- the purity and depth – of your work. If you have a craftsman’s heart, a keen attitude, and a certain disdain for complacency, the world is your oyster in any market.

JV: Are you pleased with the work that comes out of Raff Radio?
Franklin: Yes. But in preparing for this interview I dug into the archives and pulled out some old spots and gave them a listen. There are, naturally, some fantastic spots in the can and some very well-executed and commercially successful campaigns, past and present. But the fun stories and the best lessons are the nightmare stories, so here’s one more reason God gave us tape bulkers and delete buttons: We did a campaign for The Music & Arts Centers – a client that grew from twenty-some to eighty-some stores with Raff Radio – and I was dead-set on a certain direction for a fall music instrument rentals spot — we’d custom-tag these market by market. The unique selling proposition is that the employees at M&AC are, on the whole, teachers and musicians, that they truly care about kids and music, and that they are uniquely qualified to guide schoolchildren through the instrument choice, sales and rentals process. Well I had something entirely different in mind. I had a vision of a child transformed by the power of music, and I wanted to paint the picture of an imaginative young girl who forsakes prime-time TV to sit outside on a dark fall night and listen to the “symphonies” of the crickets. I was addicted to the concept of a 60-second spot that started with ten seconds of nothing but crickets, and I went so far as to get a well-known young actress -- a personal friend -- to break a SAG work strike to cut the spot for me. And she, in turn, dug deep into her character as a pubescent Ophelia searching for identity and meaning in the Era of Interminable Sales Messages or some such nonsense. There’s a way to get the best out of actors. You must never, never, ever give them line readings.

Well, to start, the entire spot was whispered. I had the talent on a huge diaphragm mic that picked up her heartbeat, for goodness sakes! And then there was this din of crickets all over the piece. It was a spooky commercial designed to utterly subvert the spot set. And if it had ever aired, it would have done just that. But though the concept was nifty, the execution missed “sixty second sales call” by about three exits and turned right into the parking lot of the Bates Motel. I could not, for instance, let go of the part of the copy where the girl, speaking of our worthy arthropods, whispers: “in the winter they hibernate, or die… But that’s a kind of music, too…” At the time, you see, I was just so in love with the “big idea” that I couldn’t see that the spot would have been unacceptably risky as a sales tool. And I negated my own focus group — a bunch of people you pay to sit on a couch together — whose response was frankly one of utter emotional distress. So there I am in the boardroom, fresh out of Leonard Cohen negotiating tricks, pleading with the client to accept a spaced-out, morbid introvert and a handful of crickets as their national spokespeople. I crack up just thinking about it. The point is that you make mistakes along the way, often for entirely noble reasons, but that pushing the envelope is never really wrong, and your clients know it. As Leo Burnett used to say, if you reach for the stars you might not get one, but you won’t get a handful of mud, either. Crickets, maybe, but not mud. We kept the client.

July 01, 2010 9206
By Jim Kipping Alas: A new beacon of light at the end of the production wind tunnel we force ourselves into every day. This article will change the way you will do work in your studio or on the road. Production folks,...
Read More...
© 1988 - 2022 Radio And Production, LLC
Go to Top