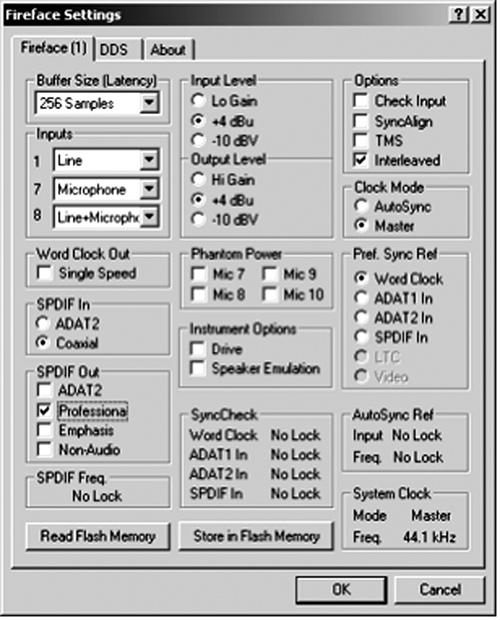 The two software programs included with the Fireface are Settings and TotalMix. The Settings software allows you to configure the interface’s various options, including input selection and level, output level, configuration of digital I/O, phantom power on/off, and system latency. There are displays for system clock source and frequency, and you can tell at a glance if you’re just locked (working at the same sample rate) or actually sync’ed (slave devices are sample locked to the master clock). You can even “detune” your entire workstation by adjusting the clock plus or minus 4% from within the Settings program.

The TotalMix program essentially turns the Fireface into a standalone mixer, and it has complete access and control of the DSP in the unit. TotalMix can freely mix, distribute and route all of Fireface’s inputs and outputs. You can create up to 14 completely independent stereo submixes using the software, making it simple to create mix-minus and phone patch submixes, additional independent headphone mixes, and more. Once you’ve set everything up the way you want it and have stored it to flash memory, all the Fireface’s settings, including the TotalMix setup, clock settings — the whole enchilada — are recalled when you switch on the power to the Fireface. So even without a computer, Fireface can be used as a stand-alone submixer, a multichannel A/D and D/A converter, a headphone mixer, a multichannel microphone pre-amplifier, or even a format converter (albeit an expensive one). You can also run TotalMix along with your editor, where it provides metering that is quite possibly more accurate than what you see in your editor.

TotalMix features a Matrix window that is a quick alternative for setting routing schemes. The Matrix displays all 28 inputs and outputs in a grid, with all the hardware outputs across the top and all hardware inputs and playback channels down the sides. Connecting a playback channel to an output requires just a click in that crosspoint. But if you click again on that crosspoint, you can enter a gain value for that crosspoint or even mute it altogether. Once you have things as you want them, you can save the entire setup as a preset for later recall. It’s one of the easiest routing systems I’ve experienced, and the ability to set gain is a large bonus.

Fireface also has a MIDI input and output, and the setup software will allow you to assign MIDI as a clock or sync source if that’s what you need. I used the MIDI interface to change patches in my outboard reverbs from within Acid, and it was not only handy to have but it also eliminated having a separate MIDI box hooked to the computer. 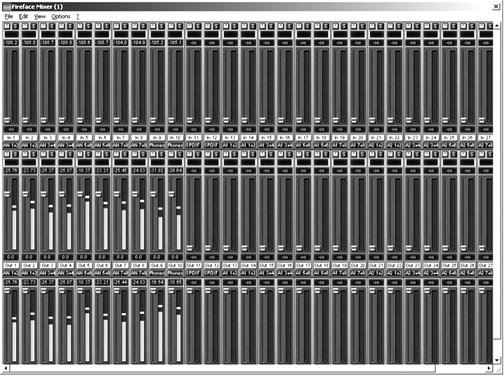 The quality and accuracy of your word clock has a direct impact on the quality of your digital audio. In general, you’ll always get the most accurate sound quality by using the word clock that runs your A/D converter as the master clock for the rest of the digital devices in your studio. The FireFace 800 is equipped with an internal word clock that RME calls SteadyClock, which provided an extremely stable sync source to the rest of my stuff. RME claims that SteadyClock also refreshes clock signals and removes jitter from external digital clock sources, as when you have to use the S/PDIF signal from a Minidisc as your master clock because your Minidisc player won’t recognize an external word clock.

Here’s another cool thing about the Fireface — if your software editor supports multiple I/O devices, then you can connect more than one Fireface to get even more gozintas and gozoutas. The box has one Firewire 400 (1394a) and two 800 (1394b) connectors on it, so you’ll need two Firewire ports on your computer to run two Firefaces at 400Mbps. If your computer has an 800Mbps Firewire port, you can daisy-chain two Firefaces (Firefaceii?) together from the single port, using the two Firewire 800 connectors on the back panel.

In a word, spectacular. The Fireface worked flawlessly on the PCs running SAW Basic, Adobe Audition, Sound Forge, Wavelab, and Vegas. In most of these you have the choice of using ASIO drivers, Microsoft’s MME drivers, or Window’s built-in WDM drivers. Each has its advantages and disadvantages regarding the amount of latency or delay introduced between input and output. I used either the ASIO or the MME drivers, and the system latency was extremely low — lower in fact than with Pro Tools on Windows XP.

The Fireface’s converters themselves are equally stunning. The mic preamps are clean with more than adequate headroom, and the line inputs and outputs are equally clean and very quiet. A group of us from the university informally compared the Fireface with a Digidesign 192 IO in a PC-based HD3 rig (for those of you who don’t know what that is, suffice it to say that it’s an expensive PT rig). Keeping in mind that the 192 IO is a 16-channel interface that works only with Pro Tools systems and lists at about $5K, almost three times the price of the Fireface, the informal results were three to one preferring the sound of the Fireface. Listening critically, I heard none of the high-frequency “smearing” or stereo image-collapse that I associate with clock jitter, which speaks well of RME’s SteadyClock.

I’ve always heard that RME’s sound cards and interfaces sounded good and had low latency, and in fact Bob Lentini of SAW fame actually recommends them exclusively for use with his software. Add to that the wide variety of routing possibilities — I was able to set up a VO phone patch session using the Matrix in just a few minutes — and I think RME has a winner here. It’s not cheap, but if I can replace the mixer entirely with it, the price is right.

SIDEBAR: What is Firewire (and Why Do I Care?)?

Firewire (also known as IEEE 1394) is a cross-platform high-speed serial data bus that is commonly used in multimedia -- you’ll find it on most consumer DV cameras, allowing you to transfer your movies into your computer for editing. It’s also widely used for external hard disk drives and some printers, and is finding wide use in television production. Firewire supports data transfer rates of up to 400 Mbps (in 1394a) and 800 Mbps (in 1394b), and promises to reach 1600 Mbps in the coming months.

Its cross-platform capability means a Firewire device can be used on desktop and laptop PCs, Macs, and even Unix computers. Products supporting the 1394 standard are marketed under different names, depending on the company. Apple, which originally developed the technology, uses the trademarked name FireWire, as do most audio products. Other companies use other names, such as i-link and Lynx, to describe their 1394 products.

Firewire has several distinct advantages that make it good for digital audio use. First, a single IEEE 1394 port can support up to 63 external devices (although for reliable digital audio use I don’t recommend hooking more than two or three devices in series). Second, it supports isochronous data, which delivers data at a guaranteed rate because no memory buffering is used. This is essential for the kind of real-time multi-channel data transfer that’s happening between the RME Fireface and your computer.

In addition, Firewire supports hot-swapping, its cabling is simple, there’s no worries about device IDs, and it is a peer-to-peer protocol — which means you can transfer video between two DV camcorders without using a computer. The maximum cable length between devices is 4.5 meters (about 15 feet) and a single chain of devices can have 16 hops from end-to-end, for a total length of 72 meters (about 236 feet). Firewire hubs and repeaters are widely available, at about the same prices as USB hubs.

Firewire’s main competition is USB 2.0, but so far IEEE 1394 is still on top in audio and video by a wide margin. Audio devices that use the older USB 1.1 standard, like Digidesign’s popular mBox and the M-Audio line, can handle two or four channels of digital audio quite well, but can struggle with more channels and with higher sampling rates. USB 2.0 devices promise to close the performance gap, but they are just now being introduced so it’s too early to say which will dominate. But a little competition can be a good thing. Until recently, Firewire peripherals were substantially more expensive than equivalent USB devices, but the delta is decreasing quickly thanks to the competition and to increasing use of Firewire in the products we like to use.

March 01, 2008 2924
Kurt Schenk, The Write Creative, Rochester, New York By Jerry Vigil Eleven years ago, we touched base with Kurt Schenk, who was getting a handle on a growing cluster of stations in Rochester, NY. Not long after, Kurt exited the...
Read More...
© 1988 - 2022 Radio And Production, LLC
Go to Top