Ah, the other physical blessings we gain when we lose one of our senses! Most of us in this boat experience a heightened sharpness of one or more of our remaining senses: sight, hearing, taste, touch, smell. If you have all of your senses intact, you may relate to this by noticing the hyper-creativity and talent of people like Ray Charles, Stevie Wonder, Johnny Ray, Blind Bryan Lee from New Orleans, to name a few. The testimonial examples go on and on. Walt Disney had a medical condition that caused him to envision things when he heard sound. From this was born the movie Fantasia, so he could express it without losing his mind. In my own case, the loss of one eye since birth greatly enhances my sense of hearing and smell. Of course, this acute hyper-ness has always had a downside, such as being in burning buildings at an early stage before smoke detectors pick it up, being the ONLY one who knows WAY before anyone else, and then having insurance companies chase you down to be an expert witness. That part is not fun. Or being in a room and being able to tell you who had been there an hour before because their scent is still present. Maybe I should have become a wine taster and been paid to enjoy wine instead of the other way around… having to buy the wine! But then, this speaker article by a cheap wine snob would never have happened!

Ever since I was in my twenties, I knew I would stay in broadcasting and some form of music and recording. Most people buy insurance policies. I thought it would be wise to chart and graph my hearing every six months or so with a reputable ear clinic, so I would know if there was any loss over the years, and if so, in what frequency range, so I might compensate with EQ (or so I thought at the time! Read on! *). Little did I realize at the time that I had picked the best, the famed John House Ear Clinic in downtown Los Angeles, who over the years catered to the special needs of Ronald Regan, Rush Limbaugh and the like. In my last year at my last radio job, I suffered a severe ear injury and have avoided sound as much as I could ever since, and when I need to be exposed, I do so at low to moderate levels, lest I make a constant ringing condition any worse than it has been.

With the Yorkvilles, the response is so smooth and harmonious, I was able to monitor more loudly than before without aggravating my injury. The overtones and harmonics are clean and very present. A great test of this is violin or piano solos. There is no stridency to the midrange, yet they are not dark in the midrange. Quite an accomplishment! There is a built in peak limiter in the monitors, which you may turn on and off. They not only smooth out distorted peaks that could take out a tweeter at high levels, but are also a boon to protecting one’s hearing! 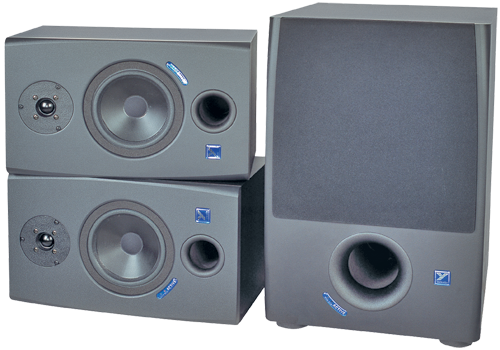 Here are some great, unique features to these monitors that make them additionally “fanciable.”

1) No wires all over the studio between speakers and amps because they are Bi-amped. The only wires are the one pair from the console out to the monitors. 2) Footswitch for the sub-woofer on-off toggle. 3) Inputs: XLR, ¼” TRS “Combi-jacks”, RCA. 4) Variable crossover to accommodate different room sizes. At the high end, the choices are normal room, bright room, and dampened room. For the low end, the “LF efficiency factor” choice is for full space, half space or ¼ space (such as corner placement), and using this compensation keeps the low end flat despite its corner location! 5) Computer friendly; they won’t suck down the sides of the picture in a tube monitor, or spread the color into a gaussian smear up and down the sides of the screens, causing need to frequently de-gauss. 6) Built-in clip limiters (mentioned above), so you won’t fry the circuitry or your ears with feedback or other high-energy stuff. Boy, wouldn’t these have been cool when we used to rewind tape over the heads and take out tweeters at a few hundred bucks a pop… plus labor? Thermal protection with auto-reset is also a feature. 7) Small footprint.

I procured a piece of rubber mat material and cut it to size (from your local grocery store’s house wares section), and placed it under each nearfield to prevent scratching and vibration on the studio table. This also assured a lower likelihood of resonance to the tabletop, and kept them from sliding around, as well! 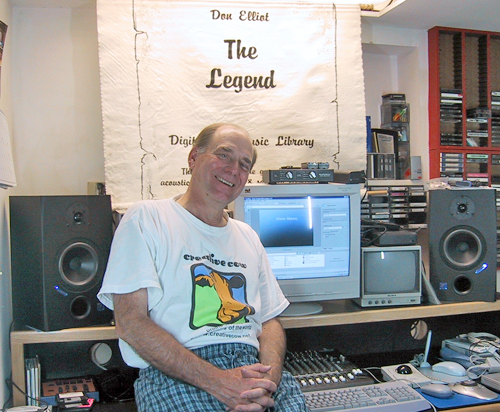 March 01, 2007 8227
By Steve Cunningham I’ve been using WaveLab once a week for years to edit half-hour radio shows and to master CDs, and lately it has been pressed into service to edit assorted podcasts. Since its introduction in 1996, Steinberg...
Read More...
© 1988 - 2022 Radio And Production, LLC
Go to Top