I’d like to report to you that I wasn’t the typical gawking tourist, but that would be a lie. The truth is that if it had been raining, I would’ve drowned, staring up at the buildings with my mouth open like that. Yes, New York City was the eye opener I expected it to be, and then some. 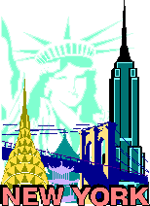 I wasn’t there by any action of my own. The guy I spend my afternoons producing won a Rising Talkshow Host of the Year award, and as part of the award he was offered one shift on WABC. He was, of course, happily stunned. I think that’s why he asked me to tag along. He only had to ask once.

His show was on a Sunday morning, so we flew in Saturday. I was ready to play tourist. Why not? It was my first time in NYC, and it wasn’t like I was going to do a show on one of the biggest Talk stations in the country the following day. Jerry, however, for some strange reason had gotten no sleep the night before the trip. So, while he crashed at the hotel, I headed out to take a bite out of the Big Apple. Okay, maybe it was more of a nibble, but I saw a good piece of what I think of as New York. Times Square, Radio City Music Hall, Rockefeller Center, Central Park, guys selling bootleg DVDs on the streets... I saw it all and then some. I was surprised at how many of the landmarks were not so far away from each other, and disappointed at the ones that were too far away for me to check out on foot, such as Lady Liberty. But for all the site seeing I did on Saturday, the biggest treat was still to come Sunday.

I knew that WABC was at 2 Penn Plaza, but I didn’t know that 2 Penn Plaza also happens to be Madison Square Garden. I still have enough midwestern bumpkin in me to find that cool. Even cooler was the realization that WABC wasn’t the only legendary station I was going to tour... more on that shortly.

Eric, a Production Ace who both works at WABC and has a great produced bit service that we use on our regular show, escorted us to the station. He got us settled in, making sure that we both had a computer for show prep (yeah, like Jerry was going to use my stuff in New York). It wasn’t long before Jerry was sitting in THE studio. When I say THE studio, I’m talking about the one that you might see every afternoon on Fox, the one Sean Hannity does his show from, the home of Curtis and Kuby each morning... basically the Holy Grail of Talk studios.

A confession here. I’ve been producing live talk shows for over three years now, and while I think I do a good job, I still can’t say that I’m the biggest fan of the genre. Still, even for me this was pretty cool. And although I’m not a big time Talk Program Director, I do think that I’m qualified to say that Jerry stepped right up and did a show worthy of the station. And he did throw in a couple of lame things I’d written, so now I can tell the Grandkids that I was “on” New York radio once.

After the show was over and the heat was off, Eric took us for a tour. That’s when I discovered that they shared a floor with ESPN radio, Radio Disney, and WPLJ. Did I take the chance to see Scott Shannon’s on-air studio? Oh yeah! The first thing I noticed was the carts. Actually, they are hard to miss — floor to ceiling, the walls are covered with them! Eric told us that Mr. Shannon doesn’t trust on-air computer systems. Carts! Who would’ve imagined it? At one of the top stations in the top radio market in the world!

There were other surprises. I did see one tricked out Pro Tools room, but most of the other Prod rooms were the same as anything you’d find at any station. In fact, one room featured an audio program whose name escapes me, but it seemed pretty basic. In fact, my overall impression of the facility tool-wise was that I’ve seen worse, but I’ve also seen better. It was all extremely well kept, but all things being equal, the average fare you’d find at any multi-station facility.

Funny, the things we take away from an experience like that. There are the obvious memories — TV screens on the buildings in Times Square with more square footage than my house, the rum and coke in Mickey Mantle’s bar, the 37 times I was ignored by cabs I was obviously trying to hail the wrong way. Then there’s that mystery at 2 Penn Plaza. How the hell do they put together such amazing radio with the same gear as everybody else in the country?

It really isn’t a mystery, of course. It’s never been about the gear. It’s about a creative mind, a good ear, and the drive to accept nothing less than the best work. Having the “best equipment” is nothing to brag about if the finished product is lame and sounds like crap. Does it matter to Scott Shannon’s audience that ‘PLJ is using carts or computers or wire recorders for that matter? Nope. Do Eric’s daily bits suffer because he can’t get into the Pro Tools room? DEFINITELY not!

I’ve come back to my production with a renewed vision. I might not have a U87 mic or a Wheatstone board in my studio, but I do have the experience to know when I’m really being creative… and when I’m faking it. So Jerry may have won the award, but I got the prize: a reminder that the best tool is still between my ears.

January 01, 1993 21805
by Jerry Vigil It's here. Another recording format. Another replacement for the aging analog cassette. Digital Compact Cassette. There is a ton of money to be made if one can capture the current analog cassette market with a...
Read More...
© 1988 - 2022 Radio And Production, LLC
Go to Top