Reverb is one of the cool tools of production. Everyone has a favorite model of reverb, and perhaps several of them. They serve to create the illusion of space, they can warm up dry tracks, and occasionally get used to hide sonic warts, particularly in music beds. They’re great fun to use and sometimes abuse.

Like many of our other tools, digital hardware reverbs are being replaced with software plug-ins. For the most part these plugs do a good job substituting for their rackmount forebears. But until very recently, few would mistake either software or the hardware reverbs for the effect of recording in an actual acoustic space. They give the impression of a space, but certainly don’t “model” it. Enter convolution reverberators.

The Waves IR-1 is a stereo convolution reverb that uses Impulse Response technology to actually “model” a physical space, rather than try to mimic it using conventional reverb parameters. Before we go any further, let’s look at how this works. 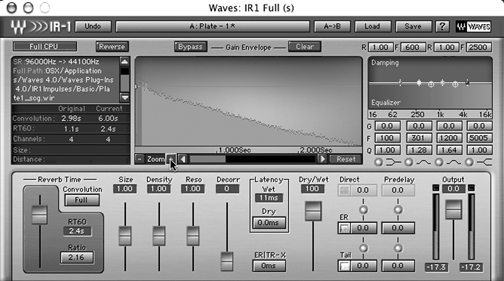 Digital reverb has been with us for over twenty years, replacing our old mechanical spring and plate devices and allowing us to simulate a wide variety of acoustical spaces. But the simulation has always been just that, creating the illusion of a space by approximating some of the natural properties of room acoustics.

To understand how the illusion works, we need a bit of acoustic theory. Reverberated sound can be broken down into three components: the direct signal that travels straight from the source to our ears, the first few early reflections that bounce off major boundaries in the space before reaching our ears, and the reverberation itself, which is sound that has bounced off multiple surfaces many times before it gets to us. Unlike the early reflections, these later random reflections are so closely spaced that our brain can’t discern them as individual reflections anymore, and they are instead perceived as a single decaying sound.

It is the few early reflections, which we perceive as echoes and are collectively called pre-delay, that give us the best subconscious cues as to the size of a room. Recalling that sound travels at 1130 feet per second, if the time between the arrival of the direct sound and the arrival the first early reflection is 100 milliseconds (a tenth of a second), then that first reflection had to travel a 113 feet farther than the direct sound to get to our ears. Our brain tells us that we’re probably in a large room. If the arrival time difference is smaller, then our brain tells us we’re in a smaller room. And if we’re in a very small room we may not perceive the early reflections at all, since most people can’t hear delay times of less than about 25 milliseconds discreetly. At that level the first reflections just seem to be part of the direct sound.