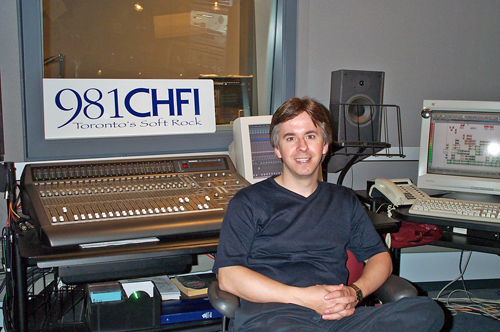 A glance at RAP Awards winners from the past several years will give you an idea of the quality of imaging and commercial production that emanates from north of the border. Canadian radio continues to put a great emphasis on quality production, and Toronto is perhaps one of the most competitive Canadian markets in this regard. In the midst of the Toronto production wars is the Rogers Communications group of stations, a cluster of four including their powerhouse AC station CHFI, and the recently launched Jack FM. Heading up the rather large (by US standards) production department is Chris Pottage, an extremely talented producer with an interesting background in the biz. Check out Chris’s demo on this month’s RAP CD, and then read on for a remarkable peek at Canadian radio at its best.

JV: How did you get started in radio?
Chris: I grew up not too far outside Toronto in a place called Kitchener. During high school, which would have been early to mid ‘80s, I did a lot of work with the Kitchener Waterloo School Board. They had a three-camera television studio and a guy there named Doug Gerrard who was sort of my mentor. He taught me a lot about television and broadcasting and was just an outstanding guy. Out of the thousands of high school students in that region, there were two or three of us who just sort of had the run of his TV studio, and we took full advantage of it. We went in there quite a bit and tried to learn as much as we could, in addition to the courses he gave. I finished high school, and he had hired me somewhere in this time to do a little soundboard operating for the Waterloo Region School Board meetings. So that and the TV experience gave me a little background in broadcasting.

Doug Gerrard later hooked me up with another student of his, who had been a student of his about 10 years earlier, and his name was Bill Reimer. Bill owned a company called Image Corporation. The Image Corporation was basically a small communications and advertising company that did a bunch of everything. They gave me a gig there based on Doug’s reference, and I did everything from video editing to video photography and some multi-image editing with multiple slide projectors all linked together at one time. I did that for a little while but always knew I wanted to go back to school, so I went to Toronto to go to a place called Ryerson to get my degree in broadcasting. I think I was in first year when somebody from the school office came looking for a student who would be interested in and capable of operating an on-air console at Q107, a pretty big radio station in Toronto at that time and still now. I guess I was one of the few students who had some background in doing something related to broadcasting, so they sent me up there. I went up there in my nice suit and brought my briefcase and my resume and everything I needed for the interview, and when I got there, the secretary of the General Manger just said, “You start tonight. There is no interview.”

JV: Not bad. Your first radio gig was at a top station in a major market! When was this?
Chris: That was in 1989. And I remember that being a stressful time trying to learn an on-air console at a big radio station. It sort of freaked me out, but it was a terrific place to work, and they had some great producers back then. Actually the same producers still work at Q107. I learned a boatload working with them.

JV: So you started out as a board op. What happened next?
Chris: Maybe a year and a half into it I started to ask about doing some real production, multi-track production. And the Creative Director there, Dave Barker, gave me a shot. They had one 8-track studio, which was already going 16 hours a day. I was there from midnight until 8:00 a.m. helping out for a bunch of weeks. I got my feet wet, but I remember being really jazzed about having that opportunity to be there and hopefully to prove myself.

I did a bunch of work with that 8-track machine, and right about that time is when they were starting to get into Pro Tools. I was also doing some work at another studio down the street, and the guy had a Pro Tools system. So when Q107 got their Pro Tools system, I said, “Hey, if you need anybody to help train your guys, I’m the guy to do it.” So, sure enough, they got the Pro Tools system, and I remember their Production Director coming in — and I don’t think I’ve ever told him this — but he came in one day and asked me if I could give him a demo on Pro Tools. I didn’t know Pro Tools. I’d used Sound Designer, which came before Pro Tools; and it was a 2-track editor, which I knew like the back of my hand, but I knew Pro Tools wouldn’t be the same thing. So I remember stalling and thinking, “Oh, man! I've got to figure out how to use this system if I want to keep myself in a gig.” I told him I’d come over later that night to the studio and show him. I went over later, and he was too busy to do anything, and I’m thinking, “Oh, thank God!” because I had no idea how I was going to talk him through it. So that night I went to the other guy’s studio that I did work with. Rob Rettberg was his name. I remember that night leaving Q107 and going straight over to Rob’s place, and I grabbed the manuals and started reading. Rob said, “Go ahead, spend as much time as you want.” So I think I spent the next 16 hours straight learning Pro Tools so that I could go back to Q107 and start training their guys. And though you wouldn’t think so, that sort of turned into a three or four month gig, just training the regular guys at Q on how to use Pro Tools. All those guys were analog, and some really weren’t too keen on going digital. Some were thrilled, but some weren’t. So I got a lot of work out of that, and from that I got into a regular freelance production position with Q.

Then in January 1993 I got an offer from Rawlco Communications, which had just gotten a new license in Toronto for an FM station, CISS. They were going to launch a country radio station. I got an offer from them to be a fulltime producer there, and I thought, “Oh, perfect. At least it gets me out of my 4:00 – 10:00 p.m. shift at Q107. Q made a counter offer, which was very flattering and nice, but in the end, the hours were just way too attractive, and I went to the country station. As it turned out, at Rawlco I ended up working longer hours, but I didn’t know that before going over there. I would say my shortest day would have been 9 or 10 hours, and there were days when I wouldn’t leave until 4:00 or 5:00 in the morning.

JV: Were you doing both commercials and imaging for them?
Chris: I started out doing a little bit of both, and it was about three months in that they gave me all of the imaging responsibilities. My old boss was certainly a better producer than me, there’s just no question about it. But I think the PD just got along with me better. So, that was sheer luck. And from there on, I pretty much have only done imaging since 1993. And boy, I learned so much at that country radio station. It just about killed me, mind you, but it was the best learning experience I think I possibly could have had anywhere. At one point in time, I believe it had the largest country music listening audience in the world. It was a pretty big radio station, and they did a lot of things right.

July 01, 2003 6244
by Steve Cunningham Left to my own devices for this month’s product review, I found myself compelled to look at a software plug-in whose sole purpose is to twist, mangle and otherwise brutalize audio. While this plug includes...
Read More...
© 1988 - 2022 Radio And Production, LLC
Go to Top