If you prefer, you can save yourself all that time and eyestrain and just read this brief roundup. Gathered here are three of my current favorite free plug-ins for your dining and dancing pleasure. Each plug-in meets a relatively short list of qualifications: it performs a useful task in the production room, it sounds good, it’s available in multiple formats and can be downloaded directly from the Web, and it costs absolutely nothing. So let’s get started. 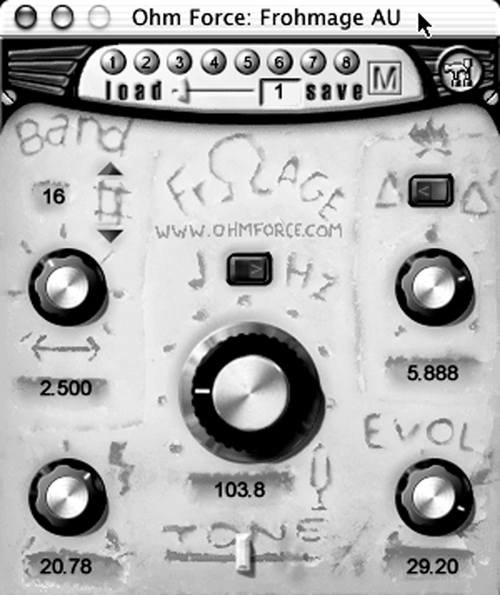 Our first stop is the home of a group of wacky French code-jockeys, Ohm Force (www.ohmforce.com). They offer several radical effects plug-ins including Fromage, their free sound mangler. There’s nothing subtle about any Ohm Force plug-in, and Fromage is no exception. It’s twisted.

Fromage’s interface is retro-crude, but fun (see Figure 1). You’ll probably have a tough time figuring out some of the knobs, although the important ones are obvious. The big knob in the center controls the LPF’s cutoff frequency, and the rocker switch above it calibrates the cutoff frequency in Hz or in musical pitch. The smaller knob in the lower left controls the LPF’s resonance. The knob in the upper left controls the spacing of the BPF bands, while the up-down buttons above that set the number of bands with “1” meaning that only the LPF is active.

The knob in the upper right quadrant sets the level of distortion. Fromage’s distortion section softly clips the signal — this is not a guitar-type fuzz box, although cranking it up will give you a decidedly grungy overdrive effect. The rocker switch just above the knob sets the routing of the distortion. The distortion processes the entire signal with the switch in the left position, or only the LPF’s output if set to the right position. The latter gives you the ability to generate a distorted VO that is still intelligible, since the bandpass outputs that carry most of the consonant sounds remain clean.

The Evolution knob is in the lower right quadrant of the panel, and it generates some of the more interesting effects in Fromage. It applies delay to the bandpass signals when the knob is moved off the 12 o’clock position. Turning the knob to the left delays the lower-frequency bandpass filters, while turning it to the right delays the higher-frequency BPFs. The Evolution control creates some delightfully odd robotic/ring-modulated effects that can properly thrash a VO track without turning it to mud. You imaging guys should like this one a lot.

The little slider at the bottom of the panel is labeled Tone, but it’s not tone in the way most of us understand it. It’s really a mix control that changes the balance between the LPF output and the BPF output. Slide it to the left and you’ll hear just the low-pass filter; slide it to the right and you’ll hear only the bandpass filter (or filters).

All the controls on Fromage are manual, and there is no low-frequency oscillator to rhythmically sweep the filter. You can automate the parameters via MIDI if you’re using an editor that supports MIDI controllers like Pro Tools, but the knobs are smooth enough that you can get away with changing them in real time.

The eight numbered buttons across the top represent presets, and each is always active for editing. To save a setting as a preset you click the “M” in the top panel, then click one of the buttons. Banks of eight presets can be saved and loaded from hard disk using the Load and Save buttons.

Not to be missed is the small slider just below the preset buttons. When you switch between Fromage presets, the effect “morphs” between the two presets, over a time period set by that slider. You can set the morph time in seconds between 0 (no morph, an immediate switch) and 99 seconds. This feature is Big Fun, especially considering the lack of automation in Fromage.