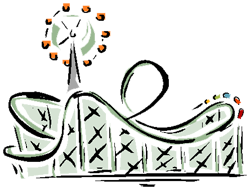 Having worked in the radio and TV production industry for around 10 years, when I first visited the Disney and Universal theme parks in Florida back in 1999, I was totally blown away – though I must confess I probably spent as much time trying to see “behind the scenes” as I did looking ahead of me. The trip certainly planted the seeds of an idea, and having only established NYPD (New Yorkshire Production Department) a few months earlier – specializing in commercial production - I decided that I wanted to diversify into bigger sound design projects too. So on my return to the UK, I made a call to the nearest park, Pleasure Island, which is only around 30 miles from my home. I asked to be put through to the manager. However, once I had tried to describe the purpose of my call, I was routed onto the marketing department, where again I tried to explain the services I could offer. I was met with a very confused response, and the lady I was talking to just kept coming back to, “but we already have some music for our radio commercials.”

Eventually I got the message across, and having established that they didn’t already have anything similar to what I was offering, I arranged to visit the park so we could discuss my suggestions further. The people I met with seemed quite interested, but I still didn’t think they could really envisage the full effect, so I decided to go-ahead and make a sound track for one of their white-knuckle rides – The Boomerang. They didn’t even know I was doing it; I just wrote up some ideas, then paid the voice-talent out of my own pocket, mixed it up and took it back to them. They really sat up and took notice. They liked the whole sound thing, and, as it was already done, I let them have “The Boomerang” soundtrack free, but at the same time I walked away with a couple of orders for other rides. From here things just kind of snowballed, as I had real material I could cut down to “demo’” length and mail shot to other parks and attractions. Orders soon came in from Lightwater Valley, Drayton Manor and Pleasure Island’s sister venue, Flamingo Land Theme Park & Zoo. Plus in addition to the sound design, I soon started picking up their radio commercial production work too, which was a bonus. We’re just about to start on projects for a new client, West Midlands Safari Park.

Having now established my services with a number of regular customers, the actual production process is relatively simple and great fun to work on. It usually starts with a site visit, to see the new ride, the area or attraction that’s going to be given the NYPD touch. Not having the benefit of the Florida sunshine — generally, the theme parks here in the UK are only open for part of the year, typically from around March to October — many of my site visits are actually during the closed season. In many cases this means that the job in hand is still under construction, or in the case of the new for 2003 Pendulous at Pleasure Island, not there at all. The landscaping was being constructed and the foundations were in place, but I was shown designs, artists diagrams and manufacturers brochures to get an idea of the ride. It was similar last year at Flamingo Land. They were developing a totally new “seaside adventure land,” which required several high impact tracks, as well as a number of different background, thematic projects too. When I arrived, the whole area had been dug up so that the cables and pipes could be buried, before the seaside adventure land was flooded! Given whatever information I have, I then come up with a number of treatments that I put to the client, and we decide which one to go with. Then I get down to writing a whole load of scripts.

As with most radio commercial production, I tend to write with a specific voice in mind, and once the scripts are complete they’re given the once over by the client. From here on, most clients now just let me get on with it, as they know the kind of thing they’re going to get, which is great for me. There’s a great selection of voice talent that I can call on, and we’ve bought in numerous specialty sound effects libraries and copyright free production music. In fact, everything we do at NYPD uses copyright free music, and we’ve sourced some great libraries from around the world. For this sound design work “Apple/Fresh” have some great movie-score type material, and we’ve also bought in specialty discs from Music Bakery. One CD that is particularly useful and highly recommended is “Symphonic Adventures,” which we bought through Sound Ideas. It’s a collection of short, dramatic, suspense pieces played by a full orchestra.

Once I’ve got the voice tracks down, I’m just left alone to play in the studio — dragging effects and tracks from numerous CDs and really just making it up as I go along. Though I’ve got the scripted words, what I do with them and where I put the effects and so on, really is up to me. Typically, a high impact soundtrack featuring a number of “inserts” spaced between appropriate music will take around 6, maybe 8 hours to produce. The client always gets excellent value for money because I tend to get carried away and cut together far more than we initially agreed on, but I guess that’s just because I really love what I do.

This year, we’ve delivered eight soundtracks to Pleasure Island alone, which includes remixing three previously produced CDs with new safety warnings – one of those was the initial, loss leading “Boomerang” we supplied for free back in 1999. Our soundtracks are used in three ways. There’s the “High Impact” style, which is contained within a small area around the ride and where guests are queuing to get on; background, thematic effects to set a wider area such as the Moroccan market place we’ve produced this year; and thirdly, we cut down examples and slightly amend them to make a “welcome” programme promoting the various areas around the parks, which covers the car parks and entrances.

Technically, we just supply the audio on CDs (one single track which is left on auto repeat), and the venues either use their own staff or bring in a company to install the PA system, and though I advise upon stereo separation to get the very best out of our sound tracks, this doesn’t always happen. We’ve been looking at a serious studio upgrade which would allow us to mix 5:1, and if we go down that route, then I’d love to be able to produce awesome “high impact” sound design, though I fear it might end up being played across a mono system!

The example of audio featured on this month’s RAP CD is top and tailed with radio spots, followed by short examples of the produced features, interspaced with very short samples of some of the music we use.

November 01, 2011 6639
by Steve Cunningham I love small companies, mostly because they’re so... well, little, and because I spent a significant part of my past life working in them. Among my favorites are the really small, one-man outfits. Often the...
Read More...
© 1988 - 2023 Radio And Production, LLC
Go to Top