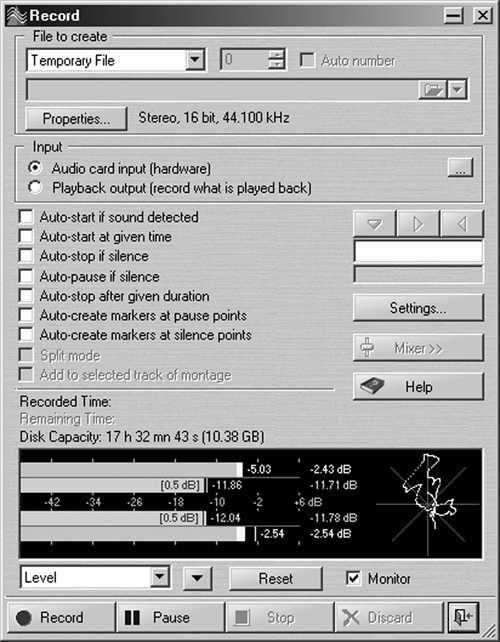 WaveLab offers some very cool analysis tools, and version 4.0 adds a few new items to the menu. The program has a selection of real-time metering functions, including standards such as level and pan, phase scope and 60-band spectrum meter, as well as more exotic wave scopes and bit meters. This last item is my personal favorite, since it lets me see both the actual bit-depth of my digital audio and how much of the available dynamic range is actually being used (it doesn’t hurt that it looks very cool on the display, either).

Those of you who record at 24-bit resolution know that you need to dither that audio when converting it to 16-bits for CD, lest you end up with low-level unpleasantness as your program hacks off those last eight bits. WaveLab helps out by providing Apogee’s UV22 dithering, available in the window just below the Master meter pane. The new UV22 HR supports dithering to 8-, 16-, 20-, and 24-bit resolution.

The other effects plug-ins bundled with Wavelab are certainly adequate for everyday use, and version 4.0 includes a couple of professional-grade processors that are perfect for clean-up and mastering applications. The addition of noise reduction, stereo expansion, pitch correction, and time stretch, along with more common effect plug-ins like EQ and echo make Wavelab an attractive package. However, a notable absence is a reverb plug, and you’ll want to add one. Since WaveLab is DirectX compatible, you can always use one from that “other” editor you won’t need anymore.

One minor annoyance is in the user-interface design for most of the supplied effects. You change the value of a plug-in’s virtual-data knob by clicking on the (virtual) data wheel and moving the mouse up or down. No problem, except that the effects always appear by default at the top of the screen, leaving little room for an upward mouse stroke until you drag the effect downward.

WaveLab 4.0 supports a number of CD burners for creating Red Book audio CDs. It can also burn mixed-mode and data-backup CDs, and has a CD-copy feature that can copy directly between two drives or write to the hard disk first. The program even includes a basic but very usable Label Editor window for designing disc labels, tray inserts, and covers. 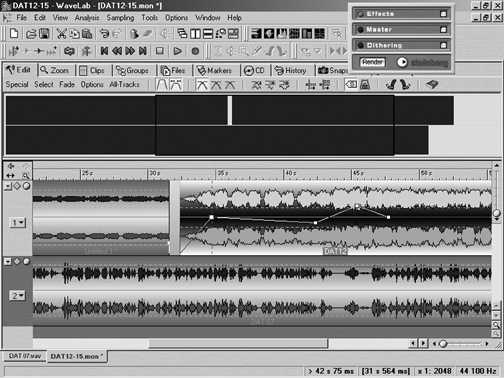 Perhaps the most powerful feature in Wavelab is the Audio Montage, a multitrack playback facility that enables you to quickly create complex collages of audio files and output the results to a variety of formats, including mixed WAV and CD audio. Audio Montages can contain an unlimited number of tracks, and each track can contain an unlimited number of clips that reference audio files on the hard drive. It’s easy to automate pans and volume fades on clips, and it’s a completely nondestructive process that leaves the source material untouched. In addition, each clip in the Montage can be independently processed by as many as 10 VST effects plug-ins.

Clips can be crossfaded by dragging them on top of each other, and fade curves can be edited by creating new nodes and manually shaping the fade or by using one of the seven envelope curves. If you create a curve that you really like, you can store it to a preset and recall it anywhere in the Montage. And if you really like it, store it as your default curve, replacing the standard linear fade.

The Montage window is a spot-producing monster. It has all the features of a multitrack editor, although Steinberg is quite insistent in its literature that the Audio Montage “is not a multitrack tape machine emulator.” I dunno, aside from not having a mixer panel it certainly behaves like one. What I can tell you is that I created several finished spots in the Montage window, and I never lacked for a function to get the job finished. And some multitrack editors don’t let you drop CD track markers and generate a perfect track report, without resorting to another program or process. But WaveLab does that.

If six big ones stretches your budget too far, you might consider WaveLab’s lighter sibling, WaveLab Essentials. It’s the same, but smaller — the Montage shrinks to two stereo tracks, it lacks some of the plug-ins, and it won’t save in the background. But it does give you a lot of bang for $250, less on the street.

WaveLab is sweet, and I’m now using it regularly in place of some of my old favorites. Heck, after the first couple of days I chose a WAV file on my hard disk, went to the Properties option, and linked it and all other WAVs on my computer to WaveLab. That should tell you something.

March 01, 1998 12534
By Jerry Vigil In this day of digital workstations with plug-ins and built-in effects, one might think that the external effects box is becoming a thing of the past. If the only effects you need are basic reverbs, delays, pitch...
Read More...
© 1988 - 2022 Radio And Production, LLC
Go to Top