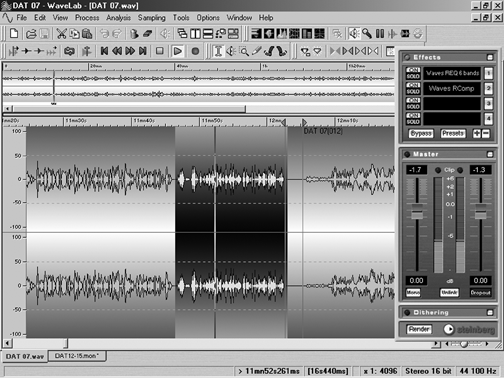 Wavelab’s basic interface is clean, ergonomically straightforward and customizable. Standard editing features are available from the menu bar and context menus. There are a total of seven control bars that group more than 70 frequently used features, that you can drag-and-dock to any side of the main window or you can let them just float on the screen. Comparing screenshots of version 3 with the current program reveals that WaveLab has undergone a substantial facelift, but the basic layout should still be familiar to current users.

As with most editors, WaveLab’s waveform windows are divided into two segments, with a small overview pane at the top and the main waveforms underneath. Clicking and dragging a section of the overview zooms to that section in the main view, making it easy to zero in on exactly what you want without fooling with zoom sliders.

Jog and shuttle are activated by hitting the F10 key, or by clicking on the jog/shuttle button in the Transport Bar. A vertical line appears in the middle of the wave display, representing the virtual playhead, and the cursor changes to a hand. If you click and drag in the lower half of the wave display you activate the shuttle function, and the play speed will increase, either forward or reverse, in proportion to the distance between the cursor and the play head. Clicking in the upper half of the waveform lets you drag the waveform back and forth over the play head and hear the results as jogging or reel rocking. When you stop moving the cursor, the audio slows to a stop. In either mode, releasing the mouse button brings the audio to an immediate stop.

While it certainly worked as advertised, the jog function was sluggish on my 700 MHz PIII, in that the display did not keep up with the audio playback. In addition, the shuttle mode was too sensitive for me — a small movement either side of the playhead set the audio playing at double speed. Although I found all this disconcerting, it wasn’t a showstopper. The jog-display situation would likely improve with a faster computer, and shuttle simply required a bit of finesse on my part. But the sound quality of both features was first-rate, and I had no real trouble finding tight edit points.

WaveLab does the ordinary tasks with speed and aplomb, and it’s especially adept at working on long-format material. For example, I’ve just finished editing an eight-hour seminar for a client. Opening a 90-minute segment for the first time in WaveLab took 33 seconds — while the program analyzed and built the waveform display — which I found substantially faster than doing the same thing in Forge. And subsequent opens of the same file in WaveLab took less than two seconds.

CD track markers can be positioned anywhere by simply right-clicking on the time ruler and selecting the appropriate marker. This was a real time-saver for me on the above-mentioned long-form project. It’s very fast and flexible, perhaps a bit too flexible, as it’s also easy to make CDs that won’t play back on home players. Fortunately Wavelab checks your work before you burn to ensure that your CD is Red Book-compliant.

Many editing functions take place in memory and aren’t final until the file is saved to disk, so simple functions like cut, copy, paste and mix are instantaneous. I found Wavelab to be substantially faster overall than other programs. It’s also worth noting that Wavelab does proper multitasking, so when you process something that takes time, you’re free to continue working on other stuff while the program crunches numbers in the background.

Batch processing — the ability to select a number of audio files and apply multiple processes to them, all in one go — went missing in Sound Forge 6, but it lives in WaveLab version 4. WaveLab’s intelligent batch processing further automates a number of DSP and archiving functions, using some pretty clever shared-information techniques to reduce CPU demands. You can process and archive entire projects to disk or CD in the background, and they can even be compressed on the fly as ZIP files.

Or you can use another new feature, WaveLab’s OSQ (Original Sound Quality) lossless encoding. OSQ seems to live up to its name — in my casual tests, it was difficult to distinguish between an original 89 MB WAV file and the same file as a 57 MB OSQ version.

WaveLab supports most major audio formats, including Sound Designer II, AIFF, WAV, Javasound, Windows Media (export only), and MP3. Also supported is the Broadcast Wave Format, and selecting that option presents you with an entry window for logging the file’s source, title, sample rate, and so on.

WaveLab includes ASIO driver support and updates MME to include WDM support. Because WaveLab isn’t a multiple-output application, earlier versions of the program required the use of MME drivers. Although not a problem in itself, it has been my experience that ASIO drivers are preferable to MME drivers in general due to ASIO’s lower latency, and trying out both in WaveLab confirmed my beliefs.

November 01, 1998 20825
By Jerry Vigil Ensoniq, long known for high quality digital gear for musicians, has made its debut into the realm of digital audio workstations. Having waited so long to do so has given Ensoniq the benefit of watching the...
Read More...
© 1988 - 2022 Radio And Production, LLC
Go to Top