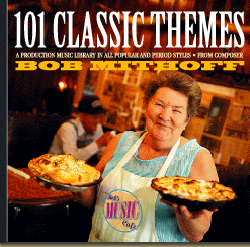 You may not have ever heard of Bob’s Music Café, but the Café and proprietor Bob Mithoff have been very busy supplying music for film, video and television… and winning many awards along the way. Bob has worked with Dan Akroyd, Sheena Easton, Berry Gordy, Howard Hewitt, Julio Iglesias, the Pointer Sisters and more. Clients include big names like ABC, Blockbuster, CBS, Chevrolet, Columbia/Tri Star, Fox, HBO, and so on. Awards include an Academy award for music, an RIAA Double Platinum award for Best Soundtrack (Beverly Hills Cop), a Triple Platinum album with the Pointer Sisters, and more. Now, all this fine talent and great music are available for radio in a handy 4-CD collection called "101 Classic Themes – Broadcast Edition."

The contents of the CDs are organized into 14 categories: Rock, Blues, Dance, Trance, Country, Folk, Dramatic, Jazz, Pop, Wacko, Orchestrated, World, Short Cues, and FX. With the exception of the Short Cues and FX, each category offers several themes in :60, :30, and :10 edits with an occasional “version B” on some :60s. The titles of the themes are descriptive enough to guide you to what you’re looking for quickly. For example, under the Rock category are themes titled 70s British Rock, Metallic, Rockabilly, Surfer, 80s Rock, Rock Athem, Modern Celtic Rock, Motor City, 90s Ireland, and Hip Rock.

Disc 1 contains the themes mentioned above along with 16 Dance & Trance themes for a total of 31 themes on Disc 1. What’s noticeable immediately on this disc and throughout the whole library is that none of the music is “in your face.” It’s subtle. It lends itself to voiceover and theatre of the mind production very well, which also makes it ideal for film and video work. For example, the track titled Metallic is not your typical total distortion show-me-how-heavy-you-can-make-it kind of metallic library track you might expect. It’s got enough grunge to get the idea across, but doesn’t try to be the “star” of the commercial. Similarly, the Blues, Dance, and Trance themes all set the mood well without overpowering the entire production.

Disc 3 delivers Jazz, Pop, Wacko and Orchestrated categories. The jazz tracks include themes titled Ragtime, Funk Jazz, Big Band, and Way Mellow. All well produced, and all delivering the feel the title suggests. The Pop category only offers 3 themes: Showtime, Announcing, and Pop Ballad. Useful, but not what other libraries might call “Pop.” The Wacko category has 7 themes good for morning show sillies, funny storytelling, or anything needing a humorous or novelty type bed. The Orchestrated category has 15 themes. Titles include Classical Pomp, Stately Beat, British Isles, Grandeur, Promenade and more — lots of theatre of the mind production music here.

Disc 4 wraps up the library with World, Short Cues, and FX. There are 10 World themes including trips to Latin America, Spain, the jungle, Jamaica, the islands, Japan and China. Short Cues offers 13 tracks of :03 to :44 musical workparts, such as fanfares, a Bad Accordion piece, a little “Circus” logo and so forth. The rest of the CD, tracks 44 through 99, belong to the FX category, which is split into four subcategories. Synth FX delivers 16 tracks of mostly simple synth sounds, certainly nothing to compete with your zip-zap imaging library, but there are some useful sounds. The next 6 tracks are Impacts and include a Bass Drum Roll, Piano Bang, Piano String Slide, and a couple of Piano String strums – the kind of sounds that if you know they’re there, you might use. The next subcategory, Bells, Whistles, Horns, give you some chimes, slide whistles, a ref’s whistle, a car horn, and a few other useful sounds. The last subcategory, Spot FX, has 23 sound effects ranging from a tape rewind, to a record scratch, to rifle cocks, to boings, to pots and pans.

Consider the Short Cues and FX categories as bonus tracks. The real value in this library is with the music tracks. The variety of music on these four CDs is excellent. The compositions are all well done. The music is well produced and very clean. Again, the overall theme of this collection seems to be understated music that does the job well. Here’s another way to describe this. If you’re a Country station, you’ll likely pass on the Country tracks for your productions because they’ll be too subtle if you’re trying to say “Country!” in your production. On the other hand, if you’re a Rock station doing a theatre of the mind spot with a story about some cowboy, the Country tracks will be perfect. Actually, what’s better than words is to visit Bob’s Music Café online where 30 of the library tracks are available to audition. You’ll get the idea.

If you do theatre of the mind production, you’ll get good use of this library. This is the type of library that you can play tracks at random to ignite creative ideas. This is definitely a library for commercial production and would easily be handy in promo production if you do lots of theatre of the mind promo stuff. The library is a buyout at $195.00 for the 4-CD set. You can get the same package for just $99 if you order online at www.MusicForRadio.com. For more information, call (800) 274-8008.