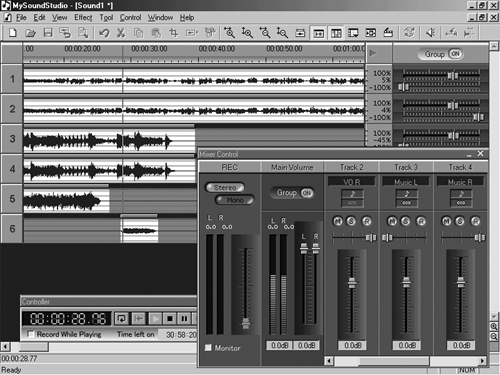 I have to admit that the student’s words gave me pause. When I mentioned in my Radio Production class that I was reviewing a product called “MySoundStudio,” several students rolled their eyes. One said, “It probably sucks. Anything with the word ‘my’ in its name usually sucks.”

But Stomp’s MySoundStudio definitely does not suck.

While its name may be too cute by half, MySoundStudio (hereafter MSS) is a capable little editor that offers more than one might expect. For $69, the same price as Cool Edit 2000, you get a six-track recorder and editor with twenty-one effects and CD ripping built-in.

MSS is a product of Stomp Inc., famous for the sticky paper CD labels and the gizmo to apply them. Stomp markets MySoundStudio toward consumers who make compilation CDs or want to clean up home-movie sound tracks. As such it lacks a few capabilities that you might consider essential, such as audio scrubbing and 24-bit file support. Its interface has a few oddities that take getting used to. But overall it has enough features and functions to work as a serviceable production tool, and makes up for some of its shortcomings with a rock-bottom price.

MSS runs under Windows 98SE, 2000 Pro, Millennium, NT 4.0 with service pack 4, and XP Home or Professional. It requires a 300MHz Pentium or faster processor, 64MB or RAM (128MB under Windows XP), and at least 12MB of available hard disk space for installation. It also requires DirectX 6 or later and a Windows compatible sound card with full duplex capability to allow recording while playing (most pro sound cards do this). The program’s requirements are light enough that it will run just fine on a modest laptop.

MSS works with both 8-bit and 16-bit digital audio at sampling rates up to 192kHz, assuming your sound card supports higher rates. In addition to handling WAV files, MSS reads and writes audio in several formats including AIFF, MP3, AU, and AVI audio.

Installing MSS is quick and straightforward. As a bonus, MSS appears to install the absolute minimum number of .dll files on your hard disk, so it’s not likely to mess up some other program on your computer. During the installation process you have options to install the browser-based help system (recommended), the PDF format manual (install it, read it, and toss it), and two tutorials (don’t bother — unless this really is your first editor, you won’t need them).

Once you’ve installed MSS, you’ll need to help it find your sound card. The Settings option in the File menu displays a window with choices for both input and output devices, and lets you specify other preferences like where temp files will be stored, the session sample rate and bit depth, and so on. Once you’ve sorted that, it’s time to record and cut some sound on the cheap.

April 01, 2009 13023
by Steve Cunningham I continue to be amazed at the number of inexpensive condenser microphones on the market. In the mid-1990s you had to spend big bucks to get a good-sounding large diaphragm condenser for voiceover work, as...
Read More...
© 1988 - 2023 Radio And Production, LLC
Go to Top