Why would anyone involved in radio production ever consider using a software editor with the word “Video” in its name?

If the product is from Sonic Foundry, purveyors of the industry-standard Sound Forge stereo audio editor, you’d know enough to consider it. Even given that the product’s full moniker is Vegas Video, I’ll bet that you’d give it a go, and you’d be right to do so.

The Vegas product has been around for several years. In the beginning, Sonic Foundry developed Vegas, which begat Vegas Pro, both of which were video editors with very capable multitrack audio editing facilities. A couple of years ago the company split Vegas Pro into Vegas Video and Vegas Pro/Audio, presumably to more clearly serve the two very different markets. Sonic Foundry has now dropped Vegas Pro/Audio altogether and put all their R&D and marketing efforts behind Vegas Video version 3.0, which is the product we’ll examine here.

Ignoring the video component for now, Vegas Video 3.0 is a multitrack audio editor with a fairly complete suite of non-destructive recording, editing, and mixing tools. It comes with 18 DirectX audio effects, supports 8-, 16-, or 24-bit digital audio at sample rates up to 96KHz. The maximum number of tracks is limited only by your CPU and RAM, as is the number of Undo’s available. Vegas Video also has the ability to import a considerable variety of file formats, including WAV, AIFF, MP3, AVI and QuickTime. Similarly, it will export to MP3, WAV, AIFF, and it supports file authoring for Internet streaming applications, such as Real Networks G2 (RM) and Windows Media Technologies (WMA). Vegas Video 3 can even edit Windows Media files directly.

Vegas Video is a PC-based application whose system requirements are a 400MHz processor, 128 MB of RAM and 40 MB of hard disk space, a Windows-compatible sound card and a CD-ROM drive, as well as a VGA monitor (a 24-bit color display is recommended). VV runs under Microsoft Windows 98SE, Me, 2000, and XP, and requires both DirectX 8.0 or later and IE 5.0 or later (thoughtfully, both are included on the CD-ROM). 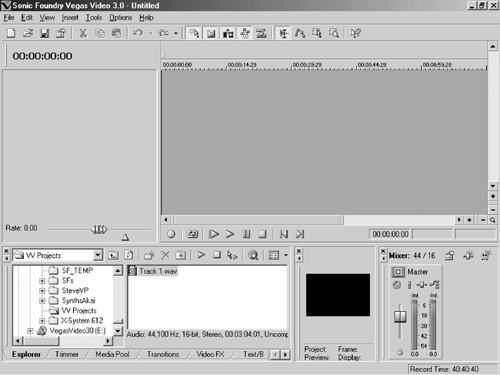 Installation of Vegas Video was a snap for me, thanks to a well-written Installation Wizard. The program first presents you with a screen from which you can choose to install Vegas Video 3.0, a batch-file converter, or just browse the CD. The rest of the installer is brain-dead simple.

Like other Sonic Foundry products, on first run Vegas Video “encourages” you to register it with a screen that lets you register online, by phone, from another computer, or later. If you choose “later”, then the program will operate in 30-day demo mode. All functions are available and working, but on day 31 you can no longer start up the program. Furthermore, that screen will appear every time you start the program, so you’ll be well served to just register the thing straightaway.

Once you’ve installed, booted, and registered the beast, it drops you into its main window from which you can do most everything, including record, edit, and mix. I am especially enamored of the fact that I can do 90% of my work from one screen, and yet it’s not overly cluttered. The interface displays the track view on top, while on the bottom you’ll find the browser, the master meters, and the video reference screen. The transport controls are just below the tracks ala Sound Forge, and a button bar across the top presents a quick way to get to the most-used functions.

Fact is, Vegas Video’s interface isn’t just an older brother of Sound Forge — rather it looks eerily like Acid Pro, right down to the track meters. If you use Acid then you’ll have little use for the online help, and if you’re a regular Sound Forge user you’ll feel at home in Vegas Video.

November 01, 1998 20981
By Jerry Vigil Ensoniq, long known for high quality digital gear for musicians, has made its debut into the realm of digital audio workstations. Having waited so long to do so has given Ensoniq the benefit of watching the...
Read More...
© 1988 - 2023 Radio And Production, LLC
Go to Top