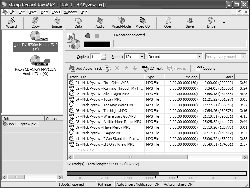 Stomp, Inc. announces the availability of its Click ‘N Design 3D CD/DVD labeling software. Available in both PC and Macintosh versions, this new labeling software allows computer users to design and print their own custom CD/DVD labels, jewel case covers, and CD business cards. Features include easy to use 3D text, an intuitive easy start label wizard, dynamic circular text editing, and multiple options for graphic effects. In addition, users can import multiple file formats or draw from over 5000 background clip art images. Works with most any inkjet or laser printer. Click ‘N Design 3D retails for $19.99 and is available at retail outlets nationwide and online at www.clickndesign3d.com. Also new from Stomp is RecordNow MAX version 4.0, CD/DVD burning software. The new version offers a simpler user interface with an Explorer-like browser for quick and easy recording. Users can still copy CDs and DVDs, record video CDs (VCDs), data CD-ROMs, DVD-ROM, DVD Video (from authored image file), bootable CDs, and create music CDs from a live audio source. In addition, RecordNow MAX can create standard music CDs from MP3, WAV and WMA files, which can be played on any audio CD player. With the included Drive Letter Access (DLA), users can leverage their CD/DVD recorder like a floppy or hard disk and drag and drop files onto their CDRW and DVD+RW disc. RecordNow MAX 4.0 still offers unlimited MP3 ripping, and now rips can be made at up to 320Kb/sec. Users can also record using up to 64 CD-RW or 16 DVD recorders at one time. RecordNow MAX 4.0 retails for $49 and is available at retail outlets nationwide and on line at www.recordnowmax.com. Visit Stomp Inc. at www.stompinc.com.

Mackie Designs unveiled a new 24-bit/24-channel non-linear hard disk recorder with a manufacturer’s suggested retail price of $2499. The SDR24/96 takes its place as the newest member of Mackie’s family of hard disk recorders that currently includes both the MDR24/96 and the HDR24/96. The SDR24/96 has processing power for 24 simultaneous channels at 24-bit/48kHz or 12 channels at 24-bit/96kHz. An internal IDE hard drive provides storage for up to 90 minutes of 24-track recording while an on-board drive bay will accommodate the same Mackie Media M-90 pullout disks and Mackie Media Project drives used by the MDR24/96 and HDR24/96. Front panel controls are fashioned after familiar tape-based systems. But, unlike tape-based recorders, the SDR24/96 benefits from true, non-linear recording and editing capabilities. Non-linear recording allows the SDR24/96 to record multiple versions of a track or track segment without destroying the original. During playback, the recorder recombines the non-linear segments into a seamless stream of audio. In addition, the SDR24/96 is able to increase recording time per gigabyte by efficiently using only the space needed for actual audio. The SDR24/96 comes with fixed rear panel inputs and outputs that include 24 channels of analog via six DB-25 ports, ADAT optical, MIDI I/O for MMC and MTC, SMPTE, and clock inputs and outputs. Also included is a USB port for export of standard .wav files to PC or Macintosh® computers. The SDR24/96 is also fully compatible with the new Mackie MicroRemote Controller ($99.00 MSRP, U.S.) and the existing Remote24. Other features include 192 virtual tracks, a full meter bridge, and 999 un-dos. www.mackie.com. 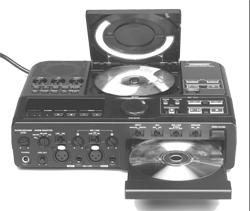 The Superscope PSD300 is the world’s first CD Recording system for the performing arts that combines a professional CD-R/RW recorder with a CD-R/RW player featuring innovative CD manipulation controls. This portable stand-alone system is designed specifically as a portable music rehearsal and performance tool. In addition to its recording drive, the unit’s CD player features the same performing arts controls found on the Superscope PSD230 portable CD player. These special controls allow musicians to practice with their favorite artist or a specialized music accompaniment CD and manipulate the key or tempo of that music on the fly. The PSD300 can adjust the tempo of any music CD as much as -33% to +50% without changing the music’s original key (unlike standard pitch controls found on some tape and CD machines). It can instantly transpose the music’s key in musical half step increments or micro tunings without affecting tempo. It can significantly reduce a lead vocal from a song at the touch of a button. The unit can also simultaneously change key and tempo. Finally, portions of music can be easily slowed down and programmed to continuously loop until a riff has been mastered. Musicians can play their instruments or sing along to music on CD, manipulate that music in real-time, and then record their live performance blended with the prerecorded music to blank CD-R or CD-RW discs. Features include a programmable mic/line EQ, noise filtering, manual or automatic level control, an internal microphone, and external stereo XLR or ¼” mic/line inputs. The recordings can be played back on any CD player that reads finalized CD-R or CD-RW data or music discs. The PSD300 also functions as a 2X speed stand-alone duplicator. The PSD300 includes RCA analog and digital (SPDIF) outputs. 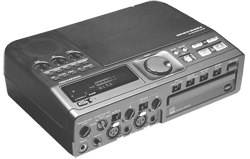 A related unit is the CDR300 by Marantz Professional, the world’s first CD Recording system designed for stand-alone portable recording. This CD recorder offers the functionality of a professional tape recorder, while recording directly to blank CD-R/RW media. Recorded discs play back in any CD player. To record, place the CDR300 on a table-top, plug it into an AC outlet, and record live using either the internal microphone or external microphones that attach to stereo XLR or ¼” mic/line inputs and use a built-in preamplifier. A built-in speaker or headphone jack allows recordings to be monitored. High and low EQ and high and band pass filtering can be independently adjusted for each mic/line input in the preset menu. 48-volt phantom power is available for condenser microphones. The unit also provides manual or automatic level control, limiter, and digital level meters. The unit can also record a CD from any digital or analog source including LPs, DATs, cassettes, or MiniDiscs. RCA analog inputs/outputs and digital (SPDIF) input/output are provided on the rear panel. The CDR300 will carry a suggested retail price of $849.  Superscope Technologies offers a line of professional audio and video equipment under the Marantz Professional and Superscope brands for the recording and music industries, sound contracting, broadcast, govrnment, audio/visual, education, and related fields. www.marantz.com, www.superscope-marantzpro.com.

Killer Tracks announces several new releases from their Atmosphere, Match, and Koka Media music libraries. Full descriptions of each release can be found at www.killertracks.com.

Congrats to RAPster Kurt Kaniewski/Cox Radio Dayton on his Crystal Award of Excellence in the recent Communicator Awards competition. Kurt won for his commercial titled “Starving” in the Radio Commercials/Furniture category.

August 01, 1993 21045
by Jerry Vigil Trying to find the right digital workstation these days is like trying to find the right breakfast cereal. There are fifteen bazillion brands to choose from, and they're all "exactly what you need." The vast...
Read More...
© 1988 - 2023 Radio And Production, LLC
Go to Top