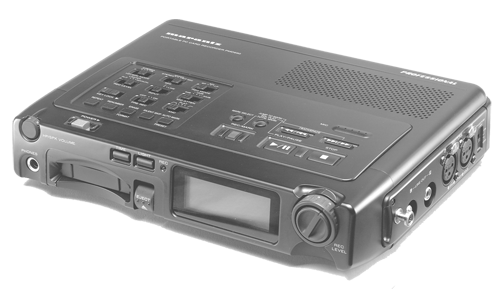 Throughout the many years I’ve recorded audio in the field, I have to say that I’ve never been completely happy with portable recorders. I’ve still got an expensive portable cassette recorder that I use for interviews — it’s reliable enough but it’s noisy. The early portable DAT recorders were promising, as well as amazingly expensive and often fragile. The current crop is now reasonably rugged and the price has come down, but it’s still DAT, and I see less of that as time goes on.

The portable MiniDisc recorders are pretty good, but I just don’t like MiniDisc... call it an eccentricity. And lately I’ve been drooling over a laptop solution with a Titanium Powerbook and a Firewire-based in/out box, but that’s expensive too. While it certainly would be portable, you couldn’t exactly walk around with it collecting sound effects.

So when our esteemed editor asked me to review Marantz’s PMD690 Portable PC Card Recorder, I was all over it. The PMD690 is a two channel portable digital audio recorder that uses PCMCIA memory cards as its recording medium. Priced at $1,499, the PMD690 implements the best features of portable MiniDisc recorders while eliminating the need to record audio tracks back into a computer for editing. The PMD690 is particularly well-suited for capturing sounds in the field without worrying about bumping the unit and misaligning the heads, because there are no heads. No heads, no capstans, no motors, and no belts.

Nope, there’s none of that because the PMD690 records to removable Flash memory cards. It’s a completely solid-state recorder. The PMD690 can record directly to Flash memory type II or type III cards, compact Flash cards with an adapter, or to one of those newfangled IBM Microdrives with an adapter. When you’re done recording, you just stick the memory card into your laptop or desktop PC and hack away to your heart’s content.

Designed primarily for ENG applications, the PMD690 is a little larger than a pro cassette recorder, and about the same size as a portable MiniDisc or DAT recorder. It weighs in at just under three pounds, and the package includes a shoulder strap that fastens to either side of the unit. It’s pretty easy to carry around, and what’s better is that you don’t need any extras, save for spare AA batteries. Two mic preamps are built in, as is a small speaker for playback. There’s even a built-in condenser mic for those times when you really want to travel light.

The PMD690 records mono or stereo digital audio in either linear PCM (.wav or .bwf) or compressed MP2 formats, and you can select one of eight different MP2 bit rates between 32 and 384 kilobits per second (kbps). The unit’s bit depth is 16 bits and its sample rate is fixed at 48kHz, which is probably a nod to the video side of ENG.

Although its case is plastic, the PMD690 is not at all flimsy. It feels as if it will withstand a fair amount of abuse, short of a direct trip to the concrete. All the switches are recessed, and the dual concentric record level knobs and headphone volume knobs are rubberized which gives them a nice positive feel.

Those knobs are located on the front panel, along with the slot for the memory card, and the display. The display shows a counter, the meters, and lots of tiny icons that indicate the state of the machine. Given the huge amount of information presented in the display, I wish it was a tad larger and easier on these old eyeballs. It’s fortunate that once you get the machine set up you’ll only need to see the meters and counter, which are clear enough.

There’s a big Eject button next to the slot for when it’s time to remove the memory card, and buttons to change the counter’s mode and to fire up the display’s backlight. The headphone jack is on the lower left corner of the front panel, which is good news for protecting your headphone plug while you’re running around Out There, recording Stuff.

On the right side are the unit’s two balanced XLR inputs, which operate at either line or mic level. The line level input spec is nominally -20 dBU — a bit more sensitive than most pro gear, so you’ll need to pay attention to your levels to avoid overloading the inputs. The mic level input spec is -68 dBu, which is sensitive enough for the vast majority of microphones. Phantom power is available on both inputs, and is activated with a recessed slide switch next to the XLRs.

The PMD690 features both analog and digital outputs. The analog outputs are on the right side, on unbalanced RCA connectors at line level. The digital output is on the left side, and its format is SPDIF on an RCA connector at a fixed sample rate of 48kHz. Also on the left is a 1/8" remote jack for pausing in play or record via an external switch. Rounding out the left side is the DC input for the wall-wart, and a charge switch with indicator for charging an optional battery pack while it’s in the unit.

The transport buttons are located on the top of the case, as are the various editing buttons and slide switches for setting recording, playback and input modes. The built-in condenser mic is just above the transport controls, and above that is a built-in speaker for monitoring.