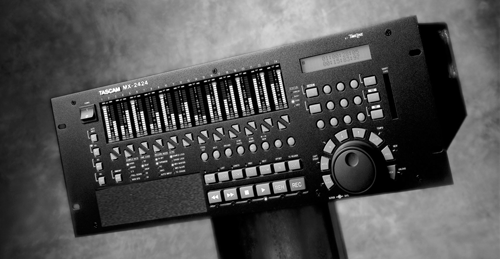 Over the years, Tascam has provided us with a lot of cutting-edge recording tools at reasonable prices. In 1992, Tascam unveiled its DA-88 8-track digital tape recorder, which at $4500 helped to fuel a low-cost revolution in digital recording. Eight years later Tascam introduced the MX-2424, a hard disk-based recorder with a list price of under $4000. The MX-2424 not only beats the DA-88’s original price but it offers some cool features, including 16- or 24-bit resolution and 24 tracks. With the recent release of version 2.0 software, the MX-2424 now has the ability to record up to twelve tracks at a 96kHz sampling rate, and provides for compatibility with the HFS+ Macintosh drive format for use with big drives.

The Tascam MX-2424 is a dedicated 24-track hard disk recorder/editor developed in conjunction with the company’s Timeline division, which has had success in the post-production market with their digital dubbers. The unit is operationally straightforward in that it’s laid out more like an analog multitrack than a workstation, although all the typical workstation editing capabilities are there as well. Finally, the MX-2424 reacts just as does an analog deck, with no appreciable latency or punch-in/punch-out timing problems. To my thinking, it responds and feels like an analog Otari 24-track.

Like the Tascam DA-88, the MX-2424 is housed in a four-rackspace chassis, and as we’ll see, the physical connectors make it a plug-and-play replacement for the DA-88. The unit is fairly deep (17.5 inches) to accommodate the motherboard inside. A cooling fan is mounted near the rear of the unit on the side panel. Although the presence of fan noise can be annoying, the optional RC-2424 remote ($1,499 MSRP) lets you mount the MX-2424 in a machine room or other location away from open mics. There is a front-access single drive bay, into which is typically installed a DVD-RAM drive or backup Travan tape drive. The MX-2424 also comes with some substantial weight, and tips the scales at 31 pounds with a couple of option cards installed.

Popping the top cover, I was impressed by the clean circuit layout. The drive is a 9.1GB Quantum Atlas V, which in my experience is a solid, high-reliability unit, mounted in the bay above the open slot for a second internal drive. The user can pick from a list of Tascam-recommended drives, ranging from Travan, DVD-RAM, hard disks or hot-swappable, removable Kingston carrier frames. Additionally, a rear panel wide-SCSI port is provided for external storage and/or backup devices. Also on the rear panel are two empty slots for I/O options. When installed, the analog option occupies the large slot and has 24 AKM 24-bit/96kHz ADCs and DACs (one per channel) built into a shielded card cage. Judging from the inside, the MX-2424 appears to be sturdy and well designed.

One of the attractions of the MX-2424 is the ability to configure it exactly as you wish via a number of I/O cards. My MX-2424 came with 24 channels of AES/EBU digital I/O as well as 24 channels of analog interface. The optional AES/EBU interface features three of the familiar 25-pin D sub connectors, each with eight channels of digital I/O. The IF-AN24 analog interface uses six 25-pin D-sub connectors, each of which carry eight channels of balanced audio either for input or output. If you’re planning to use the analog I/Os, you’ll need to get six breakout cables. These are readily available from numerous manufacturers. In addition to the optional analog and AES/EBU I/O cards, Tascam TDIF and ADAT optical interfaces are also available for the MX-2424.

Since I work in a digital studio environment with a digital console, I had to establish a digital reference clock for the MX-2424. This was easy since both word clock and video sync connectors are on the back panel on BNC connectors. For ease of daisy-chaining multiple units, both signals are available on In, Thru and Out connectors. The remaining back panel connections include timecode In, Thru and Out on quarter-inch balanced TRS connection, a Cat 5 Ethernet socket, a Wide SCSI 68-pin socket, a nine-pin remote socket, MIDI In, Out and Thru connectors, a quarter-inch footswitch jack, and the nine-pin connections (In and Out), which allow multiple MX-2424 units to be connected via their proprietary TL bus.