This month’s RAP Interview visits the 46th ranked market in the U.S. where WCCC-FM, Marlin Broadcasting’s only Hartford station, sits comfortably as the market’s top rocker in the midst of clusters of stations owned by Clear Channel, Infinity, and others. At the production helm is Rich Conway who brings a style of imaging to WCCC aimed at setting the station apart from the others by giving the audience more than “movie drops, statics, and bangs.” It’s the concept of radio as a theatre, and the stage is alive at WCCC. 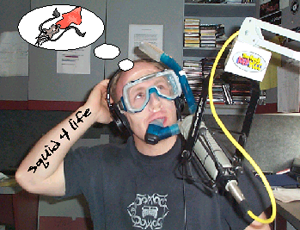 JV: Tell us about your background in radio and some of the highlights on the way to WCCC.
Rich: My first real job was at I-98 in Willimantic, Connecticut. I started there in 1988 doing a weekend overnight shift then was hired full-time to do nights. I was later called by Bob Bittens, who was programming WHCN in Hartford at the time, and interviewed with him for nights. At this point, my production skills were limited, and the interview went great until he asked if I could do production. To make a long story short, I didn’t get the gig. As a result of that interview, the next weekend I spent 48 hours straight in the production room and never looked back.

I spent some time at WHJY in Providence, Rhode Island where I was their imaging voice and producer, then I came to WCCC where I ended up on the air as a jock doing nights before Marlin took over. Then I went to do afternoons and middays at I-95 in Danbury, Connecticut for a couple of years. In 1998, when Marlin called me with an opportunity to do production full-time back at WCCC, it was a job I didn’t want to pass up. I already knew some people at the station, and it just seemed right. So, I gave up the air shift and went into production full-time. I miss not being on the air at times but never get sick of production. It’s an incredible creative outlet. The highlights along the way have been the people I’ve been fortunate enough to work with. Nothing is better than to being able to do something everyday that you’re passionate about, and do it with great people.

JV: I think our readers will get a good idea of the kind of stuff you do if you tell them the April Fool’s Day squid story. How did it start and what happened?
Rich: When I think of it in retrospect, it’s so cool. I remember walking in and hesitantly asking Picozzi, our Program Director at WCCC, about this idea I had for a report that had to do with the swimming patterns of squid. He just looked at me and said, “Whatever turns you on.” The first “Squid Report” rode that fine line where you couldn’t tell if it was real or not. In the report, this guy Gus Wilson just gives zany reports about the best places to go squid seeking. I talked about how squid were swimming off the coast of Old Saybrook, Connecticut and Long Island, New York. I talked about how beautiful their underbellies were when they poked out of the water. The reports seemed so real because this guy talking about the squid was so excited. I remember calling in Picozzi and playing it for him. As usual, he didn’t know what to say other than O…………K. It was so weird, he couldn’t possibly say no. After it aired, people would call and say, “what was that?” Before you knew it, people were calling in asking, “When is that weird squid thing going to be on again?” The reports were completely made up—even the names of the squid. It was the ultimate theater of the mind stuff.

A month or so into the reports I started telling listeners that the Giant Prehistoric Halipeano Sonoma Squid was coming, and according to my calculations it would surface in the Connecticut River between March 28th and April 18th. In the beginning, I never would have imagined what would become of an idea I had while driving down the road listening to a commercial talking about home heating oil prices going up and how I should invest now...blah, blah, blah.

On April 1st it all climaxed. At 6 a.m. I was at the station trying to figure out how this whole thing would end. I had nothing written. It was like the thirtieth report I had done in 15 days, and I was creatively fried. I produced a six-minute piece to play as the last break of our live broadcast which started at 10 a.m. or when Howard ran out of things to say. I found the sounds of this mammoth crowd and added the sound of ten friends from the station all chanting “squid, squid, squid!” It sounded like thousands were gathered at the river to see this huge event. When the live broadcast began, there I was standing in my scuba suit with our promotions guy “Craig the Porn Star” doing live breaks over this endless loop of screaming squid seekers.

At the river, we had no idea what to expect. Would people actually show? Then one car pulled in. Then two. Before you knew it, there was a large crowd of people who really thought a giant squid was coming. We thought, “What do we tell them when they find out it’s a joke? Will they start beating us up?” While we all waited for the squid, we treated them to seven 6-foot subway sandwiches. At noon, our midday guy Mike Karolyi opened the mic and sent it to the river for the historic event. Karolyi sounded so serious. Don Steel, who runs Howard in the morning at WCCC, gave play by play as Gus Wilson met his fate and was swallowed by the giant squid and carried out to sea. By this time, the people at the river were laughing, finally realizing it was a joke. But for the people listening, it sounded so real. People were calling the station all day and were freaking out. At 3 p.m. the station did a eulogy. Paul Turner, our station voice, cried as the WCCC Church Choir sang “Gus Wilson is dead.” And for those who wondered what became of Gus, he was eventually passed out of the squid’s ass off the shores of Arkansas. Long live Gus Wilson.

August 01, 2000 13054
by Steve Cunningham When Alesis first announced its MasterLink product in June 1999, they promised that it would change forever the way records are mastered. I don’t know about that, but having spent a few weeks with the...
Read More...
© 1988 - 2023 Radio And Production, LLC
Go to Top