The effects available in Deck fall into two basic categories: destructive effects that actually rewrite audio files, and non-destructive real-time effects that act like standard external effects boxes or EQ controls on an external mixer, and leave the source audio file intact. In addition, Deck can use any of several third party plug-in effects. 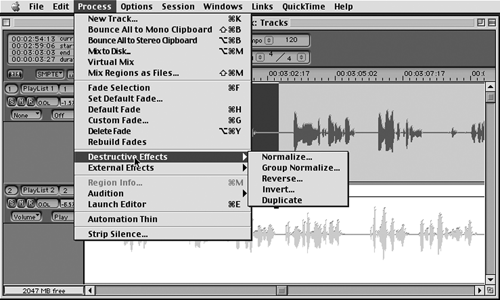 Deck’s destructive effects (see figure 5)  include Normalize, which looks at an audio region and automatically adjusts its amplitude to the maximum allowable level. There’s also a Group Normalize function that performs in the same manner, except that it finds the peak over a group of regions and adjusts each region the same amount. Reverse takes the selected audio region (or group of regions) and turns them around so they play backwards. Invert flips the audio region (or group of regions) upside-down. This does not alter the sound of the region(s), but can be useful for matching waveforms for looping and general sound design tasks. Duplicate physically duplicates the range or region(s) you have selected and copies the new audio file(s) to that session’s Audio Files folder. This is useful if you have copied an audio region several times in your Deck session, but want to have only one instance of that audio file affected by an edit, for example. Deck will make a separate physical copy of that region in the Audio Files folder, and changes made to it will not affect other copies of that region.

Deck also offers real-time, in-line non-destructive effects available during playback and mixdown. These include Gain, Delay 1 and Delay 2, Chorus, EQ, Hi Shelf EQ, Low Shelf EQ; Graphic EQ, EQ-4, and Multitap. These effects are simple to use, and have an intuitive graphic interface that is similar to that of any multi-effects box. In fact, these effects are easier to use than many hardware multiprocessors, as all the controls for all of the effects you have chosen are available in a single window.

Gain is a one-control-slider effect, which gives you a +18/-18 dB gain stage. This is essentially a preamp, or attenuator, which either increases or decreases the volume of your playback track.

Delay 1 and 2 adds a delayed copy of the audio at specified intervals, creating an echo effect. The Delay effects in Deck offer you control over the delay time (length of delay), amount of feedback, cutoff frequency and “wet,” or percent of effect, compared to “dry,” or unaffected, signal. The two delays may be set differently for application on the same or different tracks.

In the Chorus effect, the delayed sound is mixed with the unaffected audio to create a thicker sound, and with extreme settings, a woozy sound. Deck’s Chorus effects allow you to choose amount of delay, speed, depth of modulation and “wet,” or percent of effect, compared to “dry,” or unaffected signal.

Deck’s EQs allow you to select the frequency affected, the gain (the amount of cut or boost) and Q, or resonance, for each EQ selected. The Hi and Lo EQ are shelf EQ’s that allow you to select the frequency and gain of the shelf. The Graphic EQ operates as a 7-band graphic equalizer, with a slider to boost or cut each of the 7 frequency bands. EQ-4 is a full four-band parametric equalizer.

Multi-tap is designed to use multiple delays to simulate reverb-like effects. However, multi-tap is processor-intensive, and running it on many different tracks can max out your CPU and cause stuttering playback. 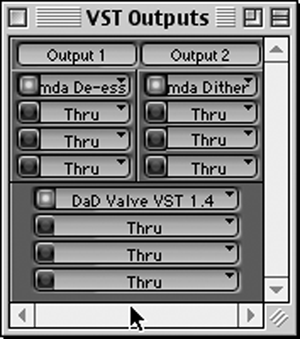 Plug-in audio effects for Deck are currently available from several third-party developers. For Deck version 2.7, plug-in audio effects for the Macintosh platform that use the Adobe Premiere plug-in architecture can be used. However, the forthcoming version 3 of Deck discontinues the use of Premiere-format plug-ins in favor of VST plugs (see figure 6). This is an important improvement, since VST-format plugs are substantially better in audio quality than are Premiere-format plugs. In addition, there are literally hundreds of high-quality VST plugs available from many different companies, while most developers have dropped the Premiere format altogether.

Deck’s ability to use VST plug-ins is a major improvement to the software. Among the many VST plugs on the market is the Waves bundle, reviewed in these pages. The Waves compressors, limiters and EQs rival many hardware effects at a fraction of the costs. Ya just gotta have ‘em.

With the addition of a SMPTE to MIDI converter and a compatible ASIO audio card, Deck can sync to SMPTE from external audio decks. Deck makes it possible for hard disk audio to play in sync with timecode DATs, ADATs, or even reel-to-reel tape recorders, with Deck running as a slave to your SMPTE source. All you need to do is route the SMPTE signal from your audio source to a compatible MIDI interface, like Opcode’s Studio 5 or MOTU’s MIDI TimePiece. Then when you select the applicable SMPTE frame rate in Deck and put Deck online, the current session will automatically synchronize to the external time code source. This feature is unique in Deck’s price range and is a very valuable tool for those working with audio on tape.

Deck allows you to create and record mixer automation so you can fully automate your mixdown process. Perhaps the simplest way to automate a mixdown is to create and edit visual volume and pan envelopes in the Track window. Deck also offers more traditional real-time mixer automation that is based on the idea of performing a mix and recording the motion of the faders during the performance. This mixer-based automation also creates automation envelopes that can be edited visually in the Tracks window. To accomplish mixer-based automation, Deck uses real-time fader motion recording, mixer states, and transition time. Real-time fader motion recording records the actual movement of Deck’s mixer faders, and is a simple, intuitive way to create automation. Mixer state automation is scene-by-scene oriented. A mixer state is a picture of the current position of every fader and pan on the mixer. Each state is stored on Deck’s Mixer State pop-up in the Transport window, and each can be recalled at any time. You can set a fixed transition time, and that time is always used to fade smoothly between each mixer state.

Once your mix is automated to your satisfaction, you are ready for the digital bouncing process. In this process you will use Deck to create a mono or stereo Sound Designer II, Audio Interchange (AIFF), QuickTime, MP3, or WAV sound file on your hard disk. This sound file will be an exact digital copy of the mixdown from which it is created, including all processing, level and pan settings, and automation. From there you can burn the resulting file to a CD, or send that MP3 out over the network.

Deck is a straightforward program that includes a strong set of built-in effects and all the editing power of the high-priced spread. Deck also offers some cool features like real time pitch and speed change for creating special effects. It’s easy to learn, and it can take good advantage of some of the inexpensive audio cards that have recently come available.

The bundled LE version of Peak, Bias’ two-track editor, has many more format I/O and precision editing options than Deck, and it is worth upgrading Peak to the full version. The two programs compliment each other nicely, and with the addition of a higher end ASIO card and perhaps a SMPTE to MIDI converter, a manly digital audio workstation can be configured for very little money.

The only quibbles I have with the program are minor. For example, while mixer states are saved within a given session, occasionally the mixer will revert to a default state after performing a save. It’s easy enough to click the button and put the mixer right, but it’s annoying, and BIAS says this will be fixed in version 3. Now if they would just get Deck to do 24-bit recording, I’d be completely blissed-out.

I’ll certainly admit to my personal bias here (all puns intended). I’ve been using Deck almost daily for nearly four years, and it has yet to disappoint me as a workstation. I’m glad that it will soon make use of VST plugs — that will be a huge improvement to a program that is just as strong as ProTools.

There is also a very active and enthusiastic mailing list of Deck users if you would like to explore the finer points of Deck in greater detail. To subscribe, send an email to: majordomo@ shoko.calarts.edu with “subscribe deckusers” or “subscribe deckusers-digest” in the body, without the quotes. After sending this initial email message, you will receive a confirmation email to complete your subscription.