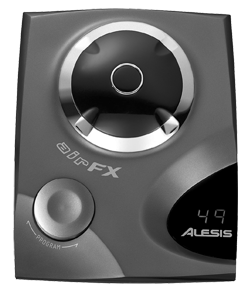 Production people are always looking for something new and different with which to mangle sound. We run our promo tracks through plug-ins that filter, flange, and distort in an effort to build breaks that will hold the listener’s attention. And we’re always on the lookout for new boxes that will provide us with new noises quickly.

Now the folks at Alesis have given us a really unique device with which to twist our tracks - a strange but most effective little box they call airFX. While airFX is targeted at club DJs, it turns out to be a terrific tool for the production room, where it can produce a range of wild effects quickly and easily. How easily? If you can wave your hand, then you can produce some killer effects in real time, and it costs less than 250 bucks.

The Alesis airFX unit is small, measuring about six by eight inches. It’s also very simple, with a front panel that consists of a Program Knob, a two digit LED display to show the program number, and the Axyz Controller. This controller is a black dome-shaped device, about four inches in diameter, which you use to control the effects in real time by moving your hand around the dome. It sounds a little wacky, but it’s effective and a great deal of fun, as we’ll see shortly.

The only connectors on the airFX are stereo analog inputs and outputs on RCA jacks, and a connector for the supplied wall-wart power supply. The analog ins and outs are connected to 24-bit converters, and Alesis says airFX’s dynamic range is 102.8 dB, with a signal to noise ratio of -102.4 dB, both A-weighted. Those are impressive audio specs for an effects processor.

The best way to connect the airFX to a mixing console is to use channel inserts, rather than using the effect send and return busses. This is because when the effect is off, the airFX still sends the dry signal to its outputs. This could cause phase cancellation or other unwanted effects if the aux return is then mixed back with the original signal. Since the effect will always be in line with your audio source, the airFX’s pristine audio specs ensure that it will only mangle your sound when you want it to do so. Of course you can always connect a recorder or CD player directly to the airFX’s inputs, and then run its outputs to a console channel, but I found that patching via the inserts was the most flexible way to go.