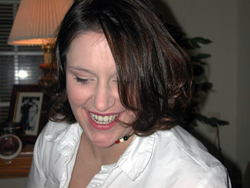 Count on your fingers the number of really talented women in radio production, and you’ll probably have enough fingers left over to finish off a plate of hot wings. And the most talented women in radio production are usually found on the commercial side of things. So, it’s even more rare to find a female producer handling the imaging for a station. Let’s make that station a rocker, one whose target audience is young males, and now you have enough fingers left to pop a beer to go with those hot wings. Ann DeWig is the Creative Services Director for Clear Channel’s DC101 in the nation’s capital. Plug in this month’s RAP CD, give her demo a listen, pick your jaw up off the floor, then sit back and read all about this fast rising prod-goddess.

JV: Tell us about your radio journey to WWDC starting from your first radio experiences.
Ann: I grew up in Denver and ran away to college in a small town in Iowa where I jumped head first into their entire mass media program. Immediately, I showed interest. They threw me on the campus radio station. They threw me on the campus television station. I was anchoring weather. I was also doing a weeknight show on the radio station. It was a small town, so it wasn’t really a big deal. Before I knew it, one of my classmates suggested I join her doing part-time work at the local commercial radio station because they were looking to hire. So, I started board op-ing for Twins games up in Iowa, and they soon moved me over to the big Top 40 FM to do board op-ing for Casey Kasem. That turned into weekend overnights, which turned into weekend swing shifts, which turned into middays. And in Sioux City, Iowa, the turnaround is such that at 18 I became the Program Director of the AM station, which was Big Band, and they asked me to switch it to a Talk format. So, I worked my butt off and put in an automated system. I was throwing Michael Reagan on… “oh, that sounds good. We’ll put Dr. Laura on.” I had no clue. I wet my feet in that arena and played around as the Music Director on the Top 40 format. This was back in ’93 and ’94. It was amazing at 18 to take such an active role in a commercial radio station. That’s also where I got my feet wet in production with an 8-track reel-to-reel machine. It didn’t really spark my attention but it was something fun to do at the radio station, and it was actually something I had to do being the Program Director, producing all these IDs for Michael Reagan, Laura Schlessinger or whatever.

I was doing this at 18, and I noticed all my college classmates graduating and getting jobs at the Quickie Mart down the street—not really doing so well. I grew up in a big city, and I didn’t want to be stuck in Sioux City for the rest of my life. So, as a sophomore, I started throwing out all sorts of tapes and resumes looking for a disc jockey gig. I sent a tape and resume to every radio station in Denver thinking it was probably safe to move back home. Luckily, I got a call back from KBPI, a Jacor property, and they asked me to do weekend overnights. I guess you can say I became a jack-of-all-trades. I think at the time there were four Jacor stations in that building, and I made it a habit before leaving every day to go to every department head and ask if they needed anything. Before I knew it, I was producing a show on K-Talk. I was doing weekend overnights on both KRFX and KBPI. I was a Production Assistant for KBPI and KRFX. I filled in for traffic and continuity. You name it; I did it. When someone went on vacation, they called me. And that’s how I jumped into production because Todd Little, who was the Creative Services Director at KBPI and the one that returned my call when I was in Iowa, left to take a programming job. They filled his shoes by asking me to fill in. They weren’t really expecting me to take on the job full-time, but I think I showed such incredible drive, and everyone they were looking to hire was asking for such big money that they thought…this might not be a bad idea. So after about six months of filling in as the Creative Services Director at KBPI, the great guys at Jacor called up Eric Chase in Tampa and asked him if he wouldn’t mind me visiting him for a couple of days. So, I went down to Tampa and spent two days with Eric, and I became a Creative Services Director in those two days. I’ve never soaked up so much so fast. I really absorbed a passion for production from him. It was unbelievable. I came back more fiery then ever, and they put me on as Creative Services Director for $20,000 a year. I did that for six months before the word got out that a young punk was doing pretty good, and I got romanced by KEGL in Dallas. I went down there in ’97 and joined Nationwide Communications at KEGL, which Jacor bought, and now it’s Clear Channel. I was with KEGL for about nine months when DC101 came calling. I arrived here in November of ’98.

JV: Did they hire you as Production Director?
Ann: I was hired as the Creative Services Director for DC101. And this is the first rock station that they decided they wanted a female to be the primary voice of. I was actually doing, not only the voice work, but a majority of the production from Dallas as a freelance producer. Then, after about six months they said, “None of this. You have to be here.” So, they made it worth my while to come up. I’m the station voice and the Creative Services Director.

JV: What were those two days with Eric Chase like? What did he teach you?
Ann: He didn’t really know how to teach me the fundamentals. And no one can really teach you the fundamentals of production. The best thing that someone can do is say, “I want you to listen to everything that I’ve got here,” which would be either his own work or someone else’s work, “…listen to all of this. Tell me what you like about it. If you don’t know how to do that, I can teach you.” So we sat down and listened to, not only a great deal of his work, but work from one of his mentors, Jeff Thomas, who was at KISS FM in LA for quite a while, and now he’s back in Australia. Jeff Thomas had Eric’s head ringing. We listened to a lot of his stuff together, and Eric really opened my eyes to the world of EQ and compression. Up to that day, I kind of had an idea how to put things together in a cool way, but my stuff was very muddy and very hard to sift through. I had no concept of equalization and compression, and Eric gave me that. And now from that, for the last five, six years, everyday I experiment with frequency and equalization. Every time you sit down and get a little bit better at figuring out what EQ means and where it’s strong, you get a little bit better as a producer. I’m a big advocate of learning equalization and compression. Eric taught me enough those first couple of days to help me clean up my stuff. And in cleaning up your stuff, it allows you to do more. Say I had three layers and it was coming across muddy. If we cleaned it up and everything came across strong, all of sudden I found that I could throw in four or five layers and everything would come out clean.

The human hearing range is 20Hz and 20kHz. FM radio takes away from that range, so you’re back down to maybe 50 hertz on the low end and 15 kilohertz on the high end. Radio gives you just a certain amount to play with on the EQ band. You find out that maybe your male voice has a real strong presence at about 2K. And you also find out that a dog barking has a real strong presence at 2K. And you find out that a siren has a very strong presence at 2K. You find out all these things, and the last thing you want are for these elements to be battling one another. I don’t want my voice guy talking over a synth bed if they are both very strong at 2K. So what Eric taught me was how to use EQ, how to understand the frequency band and utilize equalization to make everything sound strong.

Say you start with a music bed and voice. First, he taught me how to EQ the voice so it would pop through the music more without having to ride the levels on the music or bring the levels of the voice way up. Then if I wanted, I would add a second voice, perhaps my own. I found that my voice was strong at a different frequency. So, I would play with the EQ on my voice so that it punched through the music better. And then you add some sound bites and do the same thing. You find the frequency where it will punch through that music. Do the same with sounds, footsteps, whatever you want to add. It’s to your discretion. All you have to do is find the frequency at which it will punch through the rest of the sound. So, I would layer six, seven, eight voices deep. I would layer them all with music. I would layer thunder, a very bassy thunder underneath. You play around with it. Maybe I have six people talking at once. Maybe they’re talking separately. It turned into a playground to me. It became fun to see how deep I could layer things. I tried to get my production to the point where you could swim through it. That’s something I took away from Eric, and that is one thing I can never thank him enough for. Teaching me EQ like he did was the most valuable lesson I ever, ever learned. I’ve had several people come up here for training just like I did with Eric, and that is one thing I continually try to tell and spread the love on—until you know EQ, I don’t think you can get any better as a producer.

December 01, 2016 3180
By Don Elliot Well this is certainly not a "for dummies" type article; we will not be coming at the subject as if it were a "lab test" either. The answer lies somewhere in the middle. But radio production folks like us are still...
Read More...
© 1988 - 2023 Radio And Production, LLC
Go to Top