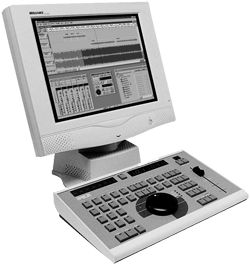 UK-based Studio Audio and Video Ltd. is best known for its SADiE (Studio Audio Disk Editor) line of workstations. The company claims to have over 600 SADiE systems in use at the BBC in England, and an equal number in other radio stations worldwide, so they definitely have some radio experience on which to draw. This month we’ll take a look at the company’s RADiA system, a four in, four out, 24 track workstation specifically designed for the radio market.

The core of the RADiA system consists of a PCI audio card, to which one or more SCSI drives are connected directly, and the SADIE software. The software is now at version 4, having been in use for several years and undergone many revisions. And SADiE’s policy of no-charge upgrades for the life of the product ensures that users get the benefit of future additions and improvements. The system records and plays uncompressed linear digital audio at either 16 or 24 bits, with sample rates up to 48kHz.

The RADiA system is available in three different configurations. The first is the RADiA Card Set at $4495 retail, and it includes the PCI processing card, the software and manual, and a balanced breakout snake. (The ever-English SADiE folks insist on calling the snake a “loom.” Hey, we’re cutting audio here, not weaving a rug! Just kidding, those Brits are a hoot, aren’t they?) The card set is for those of you who prefer to save some money by rolling your own, since you’ll have to supply the Pentium III PC, extra memory and drives, plus the monitor, keyboard, and mouse. You don’t get the fancy controller, but the software is identical to the more expensive configurations.

The next step up is the RADiA Turnkey system at $7495 retail. This gets you everything in the card set, plus a rackmount 733MHz Pentium PC with 128MB of PC133 RAM, a 20GB internal hard drive, Windows 2000, an 8MB AGP video card (which contributes significantly to the snappiness of the system) a 17" monitor, a keyboard and mouse, and a 9GB removeable SCSI drive in a Kingston pull-out carrier. It also gets you a computer that is pre-configured for SADiE, and that you know will work properly right out of the box with no worries.

The analog inputs and outputs are electronically balanced at +4dBu, and SADiE claims a peak output level of +18dBu. The A/D and D/A converters are 24-bit, and their claimed frequency response is 20Hz - 20kHz, +/- 0.5dB. The digital I/O is capable of communicating in either AES or S/PDIF format, selectable in software. Note that since the digital fan-out cable uses XLR connectors, you’ll need to provide adapters and perhaps a transformer to correctly utilize S/PDIF format digital audio.

SADiE USA in Nashville kindly lent me a Platinum system for review, so I had all the goodies at my disposal. The rackmount PC featured a floppy drive, a 50x CD reader, and a Plextor CD-RW drive, the latter of which is connected to the SCSI bus along with the removable hard disk. Nearly all the PCI slots in the rackmount PC were full. Besides the video and Ethernet cards, there was a PCI card for connecting additional external SCSI drives to RADiA’s internal SCSI bus, a card for analog I/O and another for digital I/O, both of which use DB-15 connectors, and a CAT card for connecting the Master Control Panel.

September 01, 2003 12757
by Steve Cunningham There’s something just plain handy about a stand-alone CD burner — that is, one that’s not part of a computer. A self-contained CD recorder into which you can plug microphones, with input level controls and...
Read More...
© 1988 - 2023 Radio And Production, LLC
Go to Top