As good as the built-in DSP functions are, there is always room for more, because more is more. And Peak supports plug-ins in Premier, TDM, and AudioSuite format. So to complete the Ultimate Stereo Editor for the Mac I added the Native Gold Bundle of plug-ins from KS Waves. Based in Tel-Aviv, Israel, Waves has been supplying plug-in processors to the world since 1991, and the plugs included in the Gold Bundle are among the absolute best available anywhere. Period.

The Native Gold Bundle consists of eighteen different native plug-ins that communicate with editing programs using “shells” for each of the different plug formats (Premier, VST, TDM, etc.). The plugs themselves fall into three basic categories — equalizers, compressor/limiters, and effects, although there’s a lot of overlap between them. The equalizers in the Gold Bundle include Q10, a series of parametric equalizers with from one to ten bands, and Renaissance Equalizer (REQ) which features a six-band equalizer with “classic” characteristics.

There are an astounding number of compressor/limiters included in the Gold Bundle. C1 is a combination compressor/gate/filter that’s available in several configurations with and without a sidechain input. DeEsser is, well, a de-esser — a specialized compressor that reduces sibilance. L1 is a look ahead mastering limiter, and Renaissance Compressor (RCL) is a “classic” compressor with an Automatic Release Control. AudioTrack straddles the fence, since it’s a 4-band equalizer, compressor, and gate.

The effects provided in the Gold Bundle are generous in number and varied in scope. There’s IDR, which is a dither and noise shaping processor that’s useful when changing bit-rates (IDR stands for Increased Digital Resolution). There’s MaxxBass, which is a low-frequency enhancer similar to Aphex’s Big Bottom processor. MetaFlanger is a software flanger that produces the classic comb-filtered “swoosh” of flanging, while MondoMod produces tremolo, vibrato, and panning effects. There’s PAZ, an audio analyzer, and S1, which is a stereo imager that can correct unbalanced stereo images. Rounding out the effects are SuperTap, a six-stage delay processor, TrueVerb which is a reverb that doubles as a room-simulator, and UltraPitch - a pitch-corrector with variable formants that’s capable of some astounding effects.

It’s a big collection of noise-altering tools. And while they too are copy-protected, Waves uses what to my mind is the least onerous of all the copy-protection schemes on the Mac — the dongle. The dongle is a beige piece of plastic with a male ADB connector on one end, and a female ADB jack on the other. You simply insert it inline with your mouse or keyboard, and it tells the Waves plugs that you’re an okay guy and that you own the software. Since the copy-protection is not a file that’s written to the hard disk, there’s no risk of losing your authorization to a hard disk failure. And you can run the Waves software on any Mac you wish, just by moving the dongle to that Mac. It’s a safe and portable form of copy-protection, and I wish more manufacturers would use it. 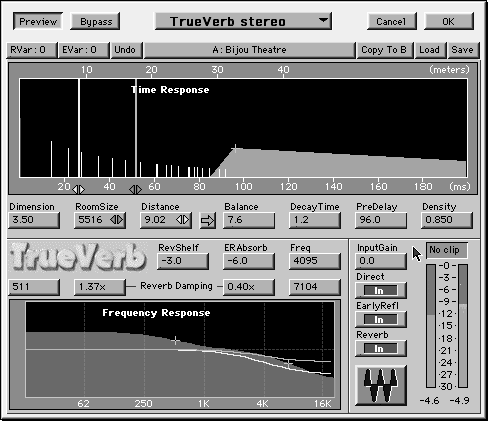 Plug In The Plug-ins

Installation was a breeze. The installer pretty much ran itself, and was smart enough to look for any editing software on my Mac’s hard disks that might also want to access the Gold Bundle’s plug-ins. That included not only Peak but also Deck II and Spark.

In use, several of the plug-ins really stand out. TrueVerb is a very versatile reverb that sounds good at nearly all settings. And man, are there settings to adjust (see figure 4). It’s a virtual Lexicon, and sounds just as good if different. 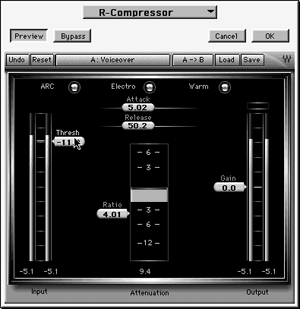 The Renaissance Compressor is outstanding (see figure 5). In fact, it’s the one plug-in I use on almost every audio project, even if just to add or subtract gain without compressing, because of the warmth and smoothness it imparts. When compressing, the various modes provided allow for a wide variety of compression effects, from subtle to in-your-face. For example, the Opto-mode provides faster release times when the gain reduction is above 3 dB, and progressively slower times when the gain reduction falls below 3 dB. The Electro-mode has the opposite characteristic. Combined with the Automatic Release Control, which gives faster release times with higher compression ratios, the Renaissance Compressor is capable of yielding compression that increases the overall perception of loudness with absolutely no artifacts. It’s quite remarkable. 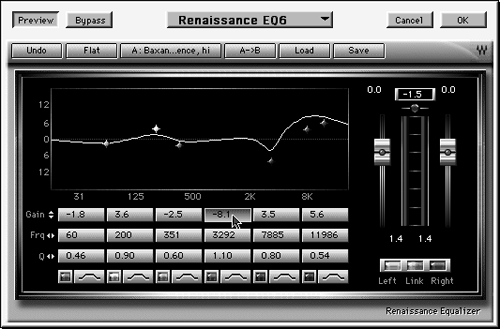 I have the most fun with UltraPitch. Although it’s intended to correct singers whose pitch drifts, it’s great fun and works well as a gender-bender and VO effects tool. Besides turning men into women and vice versa, UltraPitch will generate some swell otherworldly and robotic voice effects. Finally, I can make myself sound like James Earl Jones... at least within the computer.

Peak’s price is well within our criteria for the Ultimate Stereo Editor, and while the Gold Bundle ain’t cheap, it often sells at a good discount and is much less expensive than the hardware it mimics. The combination of BIAS Peak and Waves Gold Bundle is impressive indeed. It’s all great fun, and there’s enough editing power there to keep you busy for months.