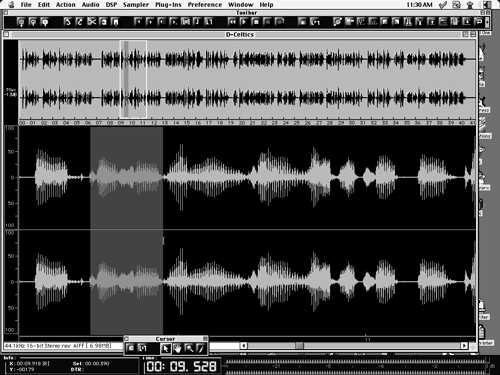 This month we’re going to assemble the Ultimate Stereo Editor for radio production on the Mac platform. Our Ultimate Editor has to be fast, stable, flexible, and it has to sound great. It has to be able to produce audio files for the Internet as well as broadcast, and produce files that are compatible with Macs, PCs, and standalone workstations. It can’t eat our equipment budget for the entire year. And finally, our Ultimate Editor has to have a high Fun Factor and a low Frustration Factor.

After careful deliberation, research, and soul-searching, I’ve decided that the Ultimate Stereo Editor consists of BIAS’ Peak and Waves’ Native Gold Bundle. Read on to find out why.

Berkeley Integrated Audio Software, or BIAS as it’s commonly known, has served the Macintosh audio market since 1994. Peak, their flagship stereo audio editor, has been around since 1996 and is perhaps the most popular stereo editor currently available for the Mac. I should know — I’ve used Peak nearly every day for the last three years, and I can tell you right off the bat that Peak is a winner.

The program is available in three different flavors. The LE (Limited Edition) is a basic 16-bit digital cut/copy/paste editor with minimal DSP options. The Native version of Peak is the full-blown product with a ton of DSP functions built-in, and the ability to handle 24- and 32-bit audio. The TDM version of Peak has all the same options as the Native version, and adds full support for Digidesign hardware as well as AudioSuite and TDM format plug-ins. This review was conducted using the Native version running on a PowerMac 8600/300 with a 466MHz G3 processor.

Peak is a mature, stable product, and is now at version 2.10. The most recent improvement to the program is the inclusion of ASIO support, which lets you use any one of over a dozen different audio cards with Peak, including Digidesign, Lucid, Korg, Mark of the Unicorn, Sonorus, and Yamaha. It can also use the Mac’s native Sound Manager, so you can use the computer’s built-in audio ins and outs if you wish.

The software supports both mono and stereo files in nearly every sample rate, bit depth, and file format imaginable. Supported sample rates run from a low of 22.050 kHz all the way up to 192 kHz (!), including 96 kHz and 88.2 kHz. It will record 8, 16, 24, and 32-bit audio files, assuming you have a sound card that is capable of playing at those bit rates. And you can open and save files in AIFF, Sound Designer II, .au, .WAV, QuickTime, RealAudio, Shockwave, and MP3 formats — whew! It definitely meets our criteria for file compatibility between different computer platforms, and for the Internet.

December 01, 2004 9358
by Steve Cunningham PreSonus has been around for almost ten years, making moderately priced microphone preamplifiers as well as outboard EQ and compressors. I’d used a PreSonus eight-channel pre several years ago, and while it...
Read More...
© 1988 - 2023 Radio And Production, LLC
Go to Top