Sonic Foundry’s multitrack media editing system, Vegas Pro, is now officially on the market ($699) and is available as a downloadable or boxed product at Sonic Foundry’s website or at your local dealer. Check out the review in this month’s RAP and visit www.sonicfoundry.com for more info. 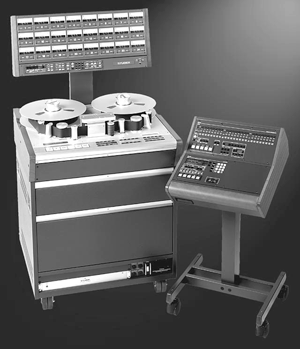 Studer of North America has announced the final run of the company’s flagship analog 24-track recorder, the A827. According to John Carey, president of Studer North America, “The continued demand from our customers for the 827 surprised us, but it resulted in planning this final production run and the development of a special collector’s edition of the 827…the A827 Gold Edition.” According to the company, leading North American studios have already placed orders for multiple machines, with the first deliveries to occur this summer. “Once these machines are sold, we do not expect to have another run of the A827,” Carey said. Analog recording is still preferred by many top engineers, producers and artists due to the warm sound that multitracks such as the A827 provide. According to Billboard’s weekly “Production Credits” listings, more than 70 percent of hit records are recorded or mastered to analog recorders such as the A827. (510) 297-2711, www.studer.ch.

The new CDP 2001™ Desktop CD Duplicator from Telex is designed for multimedia and audio applications and supports both DVD-R and CD-R. The standalone system features automatic CD format detection and one touch operation. The optional VMI (Versatile Media Interface™) Card upgrades the CDP 2001 and allows you to connect several 4x, 5-bay or 7-bay CD-R enclosures for high volume CD Duplication, as many as 280 CDs at a time. As many as three VMI cards can be installed to upgrade each CDP 2001 master unit, so each master can support 20 CD-R drives (28 with 7-bay system) or 6 DVD-R drives.  Systems start at $5,695. (612) 884-4051, www.telex.com.

Emu-Ensoniq announces a new computer MP3 authoring bundle designed to allow musicians to create music with a PC and then encode the finished tune for publishing on the Internet in the MP3 format. The E-Card/Nomad MP3 Production Studio bundle ($750) consists of the E-Card, a PCI card for the PC with 64 voices of MIDI sampling, hardware based FX, and ASIO compliant hard disk recording; a full suite of software for music creation, editing, and encoding; and the Creative Labs Nomad MP3 player with 64MB of Flash memory. (831) 438-1921, fax (831) 438-8612, www.emu.com.

Panasonic announces delivery of their DVD-Audio players to begin in October. The DVD-A7 lists for $999.95, and the DVD-A10 lists for $1,199.95. While the players will accept conventional CDs, future DVD-Audio discs will be reproduced with far greater fidelity and will include other features such as the ability to reproduce graphics, text, music videos, and more. www.panasonic.com.

Fostex adds a new hard disk based recorder to their arsenal. The D-108 is a stand-alone 8-track digital multitrack recorder which draws on and improves upon the features of their D-90 8-track and D-160 16-track machines. Key features of the D-108 include Fostex’s FDMS3 disk management technology allowing, for example, up to 1,548 track minutes of 44.1kHz full-bandwidth recording on an 8.2Gb hard drive. A total of 24 tracks are available, of which 8 can be simultaneously recorded or played back at any one time allowing you to keep multiple ‘takes’ of  tracks. The D-108 also offers an additional 99 memory locate points in addition to the 6 memory edit points, 99 ‘virtual reels’ and a new graphical preview function, all of which are displayed on the large FL display. The D-108 can export and import the tracks of any project as PC standard .WAV files to facilitate editing, processing and sound file conversion using any popular PC-based editing software. SCSI-2 is standard, with balanced I/O and comprehensive timecode facilities available on optional plug-in cards. $1,495. (562) 921-1112, fax (562) 802-1964, email , or visit www.fostex.com.

encoding.com, a creator of digital media business solutions and provider of optimized audio and video encoding services for the Internet, announced an agreement with EMusic.com Inc. (Nasdaq: EMUS), an Internet seller of downloadable music. Under terms of the deal, encoding.com will convert hundreds of thousands of CD audio tracks from EMusic .com’s independent partner labels into the MP3 format, making them available for sample, download and purchase through www.emusic.com. (206) 568-2600, fax (206) 329-3276, www.encoding.com.

Rocket Network announced new roles for two key members of its executive team. Pam Miller has been named president and chief executive officer and co-founder Willy Henshall will serve as chairman of the Company’s board of directors. Rocket Network, Inc. provides “virtual” Internet recording studios where audio professionals can meet to collaborate and produce original sound live online from anywhere in the world. Located in San Francisco, the Company’s network is targeted to anyone producing professional-quality sound for TV, film, radio, CDs and Web sites. www.rocketnetwork.com.

TC Electronic recently unveiled new proprietary VSS(tm)FP (Virtual Space Simulation for Film and Post) algorithms in two new high end software packages—one for the FireworX multi-effects processor, and one for the M3000 studio reverb processor. Both software upgrades will be available within the next month and can be installed via PCMCIA card by the customers themselves as a flash ROM update.  The focus of the new M3000 post software is the continuing development of VSS(tm) technology, creating new algorithms and presets in styles of real spaces that are most often demanded by the post production industry.   The FireworX post production software package features presets more targeted towards special effects, sound design and multi-media applications, with emphasis put on real time control via the FireworX’ powerful modulation matrix for dynamic changes in audio for picture. Also from TC, a new set of enhancements to it’s UnitY card for the Yamaha O2R digital console. On the software side, UnitY now offers Finalizer studio mastering technology as an optional type of processing in lieu of M2000 style effects, in addition to many new routing features.  On the hardware side, there is now a 24-bit ADAT/TDIF I/O card available. Sister company TC Works introduced TC Native Bundle 2.0, a plug-in bundle for Direct X compatible audio applications.  Features include the new TC Native L, a single band limiter and maximizing tool for professional audio production and mastering.  TC Native L also includes the popular Native Reverb and Native EQ Works plug-ins as well as Native DeX, TC’s compression and de-esser plug-in.  (805) 378-1828, www.tcelectronic.com.

Congrats to Kurt S. Kaniewski/Creative Director at WMRN/Marion, Ohio, National Winner in this year’s Silver Microphone Awards competition, reportedly one of just 2 radio stations to win. Kurt won in the category “Best Use of Music” and also came away with 8 National Finalists awards including one “National Category Runner-up.” Nice job!

“The Competitive Edge,” the biannual marketing tip sheet written and distributed by Keith Hatschek & Associates, is now available on the company’s web site at www.hatschek.com.  The publication provides valuable tips, how-to’s and strategy for today’s marketing and sales professional on a variety of topics, including creating great ads, effective public relations strategies, direct mail basics and market research. Keith Hatschek & Associates is a full-service marketing and public relations agency providing counsel to leading companies in the recording technology, broadcast and post production industries.  Additional information on the firm and its services is available on its web site.

CPV Communications has just launched an Internet database of voice-over talent. The collection of thousands of voice samples includes English (standard broadcast and all major dialects and accents) as well as foreign languages. Interested producers can browse by language, voice-type, age-range and gender to sort out the best voices for the job. Each voice can be listened to rapidly by selecting a 3 to 5 second thumbnail before downloading the full length sample. In addition, CPV offers custom auditions with client-supplied scripts and spec-sheets. The CPV voice-samples database and services can be found at www.cpvcom.com.

Ron Harper exits WWMG/Charlotte to become the Director of Radio Services for the Texas Department of Agriculture in Austin. Best of luck, Ron!

Syntrillium Software has hired David Miles Huber, a digital audio consultant, author, and teacher, as a “Traveling Sideshow Evangelist.” Dave, the co-author of Modern Recording Techniques, will be touring various regions of the US and Canada to provide staff training and customer clinics using Cool Edit Pro. Email for scheduling info. www.syntrillium.com.

Harris Corporation and Pacific Research & Engineering Corporation have signed a definitive agreement for Harris to acquire PR&E through a cash tender offer that values PR&E at approximately $9.5 million. The acquisition is expected to close in September. (407) 727-9126 (Harris) or (760) 438-3911 (PR&E).

February 01, 1997 10267
by Jerry Vigil DAT is alive and well. This format remains an affordable and reliable way to record, master, and archive digital audio. As the years pass, manufacturers continue to serve up decks with new features and...
Read More...
© 1988 - 2023 Radio And Production, LLC
Go to Top